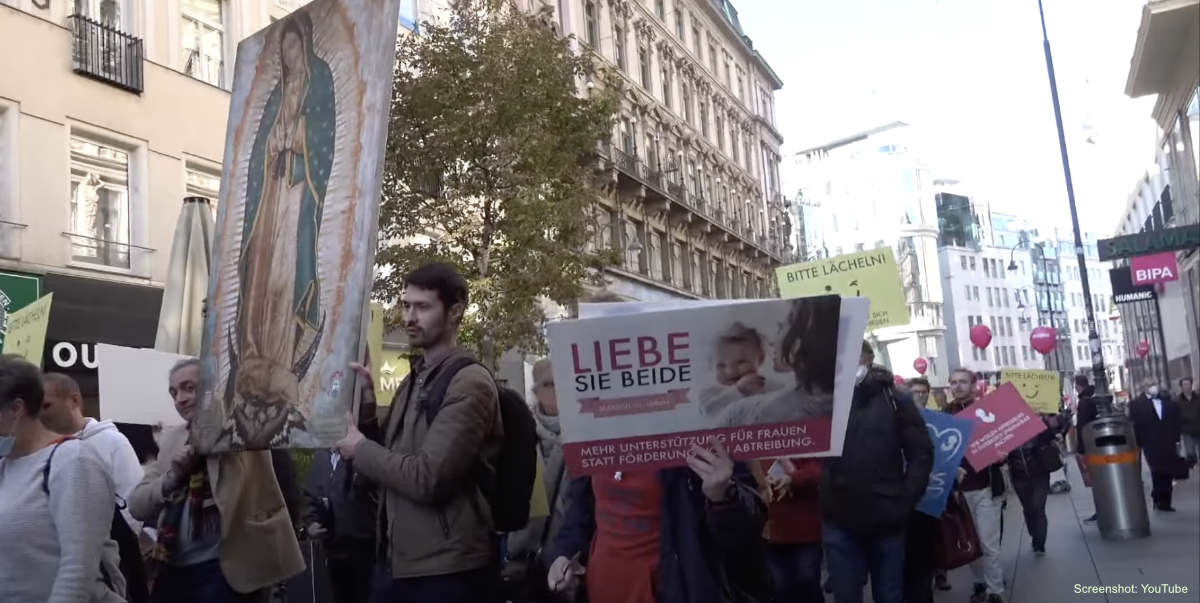 (Right to Life UK) As thousands of pro-lifers walked through the centre of Vienna in this year’s March For Life, the police had to step in numerous times to prevent highly aggressive protesters from disrupting the peaceful march.

Last weekend, on Saturday 16 October, 2,500 pro-lifers attended the March for Life in Vienna and found themselves hounded by aggressive pro-abortion protesters along their planned route.

The March for Life was blocked from walking down Kärntnerstraße, one of the central shopping streets in Vienna, by protesters who screamed obscenities whilst beating drums and holding smoke flares. After diverting down a side-street to avoid a confrontation, the marchers quickly found they had been penned in front and back by the protesters.

Those on the March For Life remained undeterred, however, as some pro-lifers even improvised pro-life songs to the beat of the protesters’ drums. Fortunately, the police cleared the way and kept the pro-abortion protesters away from the pro-life March even when the protesters started walking towards them en masse.

Despite the disruption, speakers at the March, Belinda Schmölzer from Pro Life Europe and Stephan Groicher from Jugend für das Leben (Youth for Life), emphasised the importance of meeting the women who have chosen to have an abortion with love and care.

This year, the focus of the March was on euthanasia, which is set to be made legal in Austria in 2022.

A moment of silence was held for Sir David Amess MP, a patron of Right To Life UK, who was murdered at his constituency surgery last Friday.

Current legislation which bans assisted suicide will be repealed on 31 December 2021.

Speakers at the March For Life discussed the experience of other countries that have already made assisted suicide and/or euthanasia legal.

Fear of being a ‘burden’

Countries like Canada, where the practice has already been legalised, reveal that the motivations for assisted suicide are largely social and not related to physical suffering. In 2019, Canada reported that more than a third (34%) of those who opted for “medical assistance in dying” cited concerns of being a burden to family or carers. A further 13.7% cited “isolation or loneliness” as their reason for procuring an assisted suicide.

This experience is corroborated by the Oregon Health Authority, which found a series of concerns not related to physical suffering for people who ended their lives by assisted suicide.

READ: Jamie Lynn Spears says she was pressured to abort her daughter

A recent Irish study on ageing found that three-quarters of people over 50 who had previously expressed a wish to die no longer had that desire two years later, and that many who do express a wish to die do so for non-medical reasons.

Right To Life UK spokesperson, Catherine Robinson, said: “These Marches for Life are so important. They take place across the globe every year and they remind our political leaders that we care about unborn babies and their mothers; that we care about the sick and elderly who are at particular risk of being targeted by assisted suicide and euthanasia laws. Moreover, they remind our political leaders that they should care too”.

“As always, the aggression of the pro-abortion protesters shows the weakness of their arguments. Hopefully though, if any of them actually listened to the content of the pro-life speeches, perhaps they can be persuaded to join the March For Life next year”.