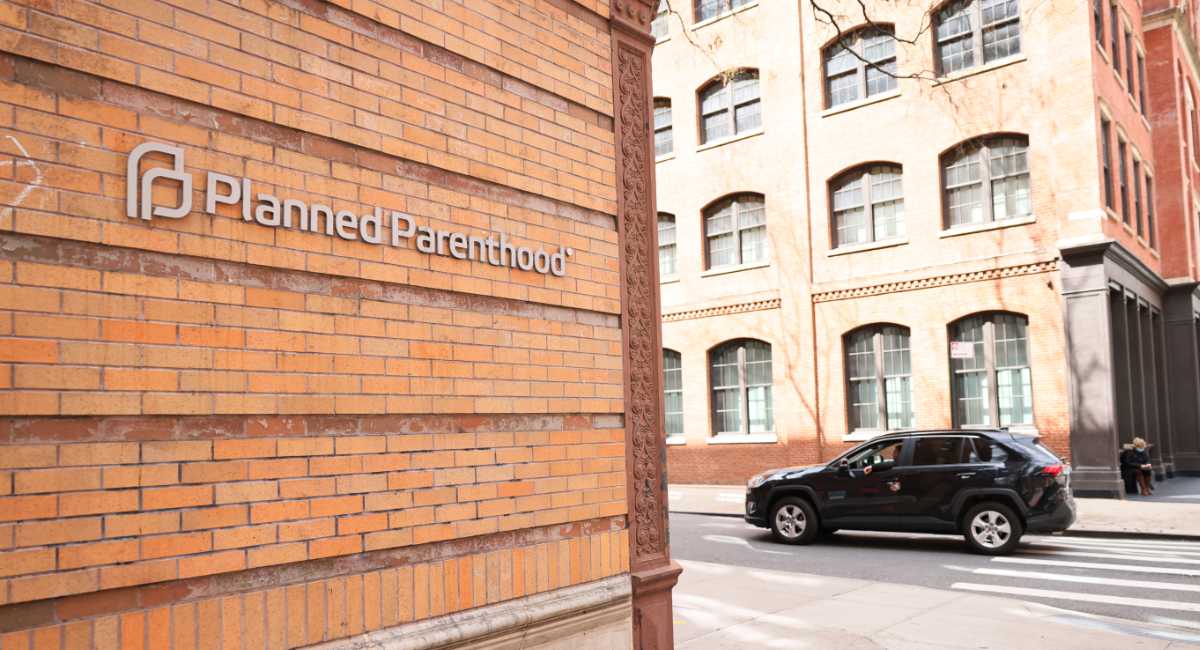 Concerns of antisemitism at Planned Parenthood have been alleged in a discrimination lawsuit filed by Ilana Gamza-Machado de Souza, who is Jewish and formerly worked as Planned Parenthood’s Senior Brand Marketing Director in the Communications & Culture Department. The lawsuit named Planned Parenthood Federation of America, Inc. (“Planned Parenthood”), Rachel Moreno, and George Walker as defendants and charged that they discriminated against her “based on race and religion,” and created “a hostile work environment, retaliation and unlawful termination, in violation of Title VII of the Civil Rights Act of 1964…”

The lawsuit was briefly mentioned by the New York Times, which claimed that Gamza-Machado de Souza was “fired from Planned Parenthood for complaining about antisemitism at the organization” after she allegedly “alerted more senior managers.” A Bloomberg Law headline about the lawsuit read, “Fired Jewish Planned Parenthood Worker Can Sue for Retaliation.” 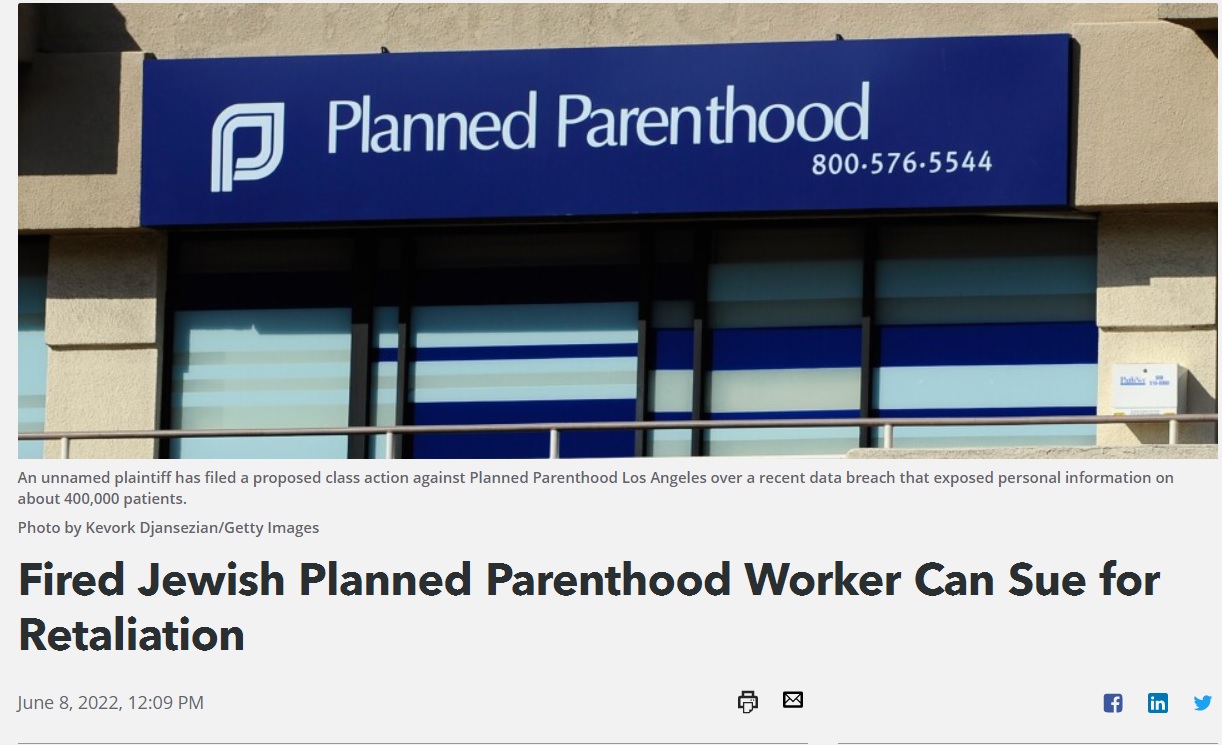 The June 2021 lawsuit follows a separate discrimination lawsuit filed by former Planned Parenthood employee Nicole Moore, whose complaint laid out a damning case alleging that Planned Parenthood “tokenized” staff of color and often retaliated against them when they spoke up. In her lawsuit, Moore claimed she reported to Gamza whose direct supervisor was Rachel Moreno, the Vice President of Brand & Culture (“B&C”), and the person Moore claimed in her lawsuit had been “inexplicably hostile toward her.”

Gamza’s lawsuit described similar issues with Moreno, that while at Planned Parenthood (between October 1, 2019 and November 30, 2020), she had been allegedly told by Moreno that she “does not want an old Jewish woman running a multicultural department” and that she was also allegedly told by another director-level employee (Nia Martin-Robinson, Planned Parenthood’s Director of Black Leadership and Engagement) that “there were too many white Jewish Chief Executive Officers in positions of power, and it [was] time to get them out.” 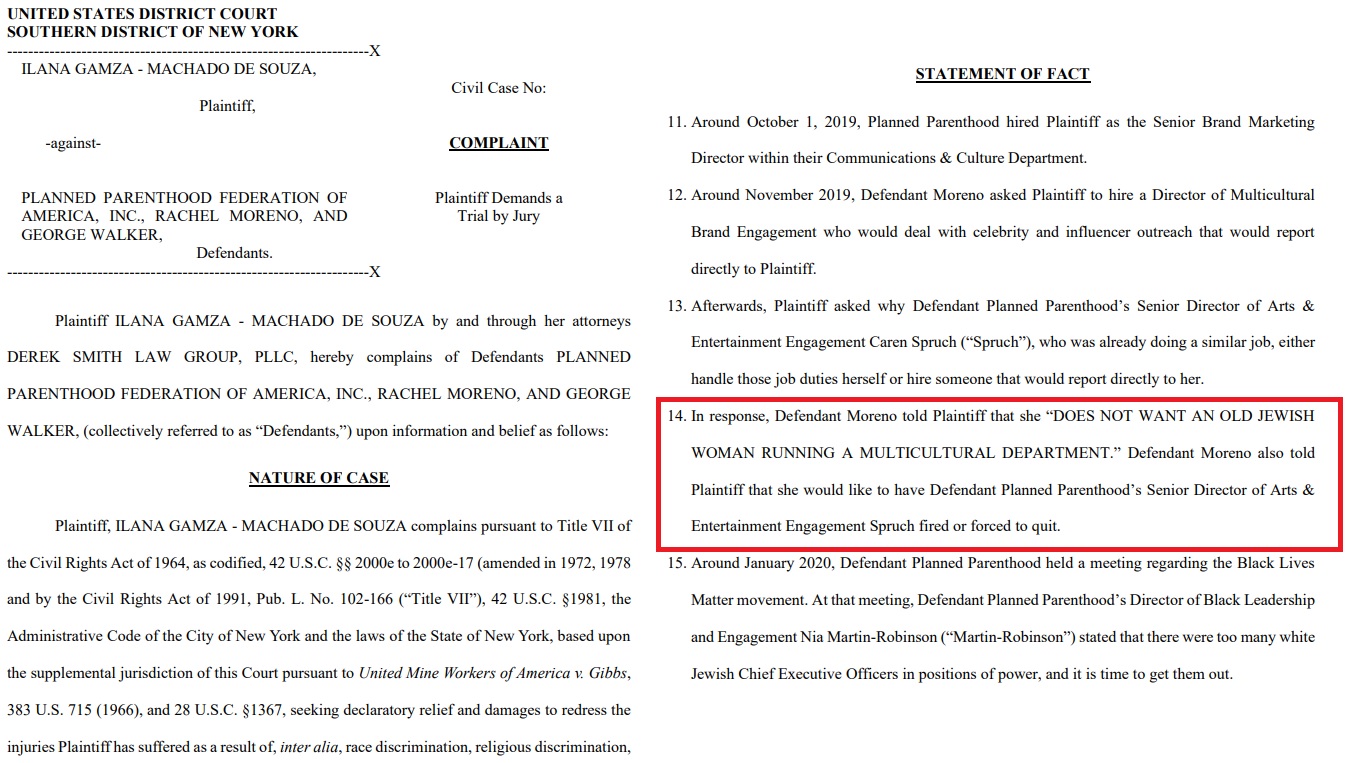 “On August 11, 2020, Plaintiff and Walker had a video conference, during which Walker expressed concerns about having a Jewish ERG because he did not want a religious ERG and that a Jewish ERG was not correlated closely enough with Planned Parenthood’s organizational goals. Plaintiff followed up with Walker after this meeting, emphasizing that Jewish people are a race/ethnic group and not just a religious group, and submitted an updated charter for the ERG. Walker still expressed concerns. Around September 3, 2020, Plaintiff responded that the other ERG’s mission statements were similar to the proposed charter for the Jewish ERG, and that they did not seem to align with Planned Parenthood’s organizational goals,” a Casetext summary of the complaint read.

Around September 8, 2020, the lawsuit alleged that Gamza had a discussion with Maxine Squires, Planned Parenthood’s Manager of the Office of the President, regarding Walker’s concerns establishing a Jewish ERG.

The court document goes on to allege that, “During that conversation, Defendant Walker told Squires that her email inappropriately juxtaposed the need for a Black ERG with a Jewish ERG by ‘RANKING OPPRESSIONS.’ Further, Defendant Walker stated that Orthodox Jewish women were ‘BIRTHING FACTORIES’ and that the role of a Jewish ERG should be about educating Orthodox Jewish women about birth control.”

The complaint’s summary alleged that after Garmza “emailed Walker an updated proposed charter in addition to expressing her concerns about ‘antisemitism/micro-ag[g]ressions towards Jewish folks at PPFA.’ Walker responded the next day explaining he needed to make sure a Jewish ERG ‘meets with the business case.’”

Then, according to the complaint, on October 28, 2020, “Plaintiff reiterated her concerns about ‘microaggressions towards the Jewish folks at Planned Parenthood.’ Walker responded that he wanted ‘to make sure the charter is set up air tight.’ Walker advised that part of the reason the Jewish ERG was not getting approved was because Plaintiff had not picked out an advisory board, even though Walker previously had told her not to worry about that step.”

“Around November 30, 2020, just as Plaintiff was about to finalize her advisory board and create the ERG,” the lawsuit alleged that Planned Parenthood, “terminated Plaintiff claiming that they were moving in a different direction. However, a few weeks later, Plaintiff noticed Defendant Planned Parenthood had posted an opening online for a job position with the exact same title and duties,” Gamza’s complaint stated. 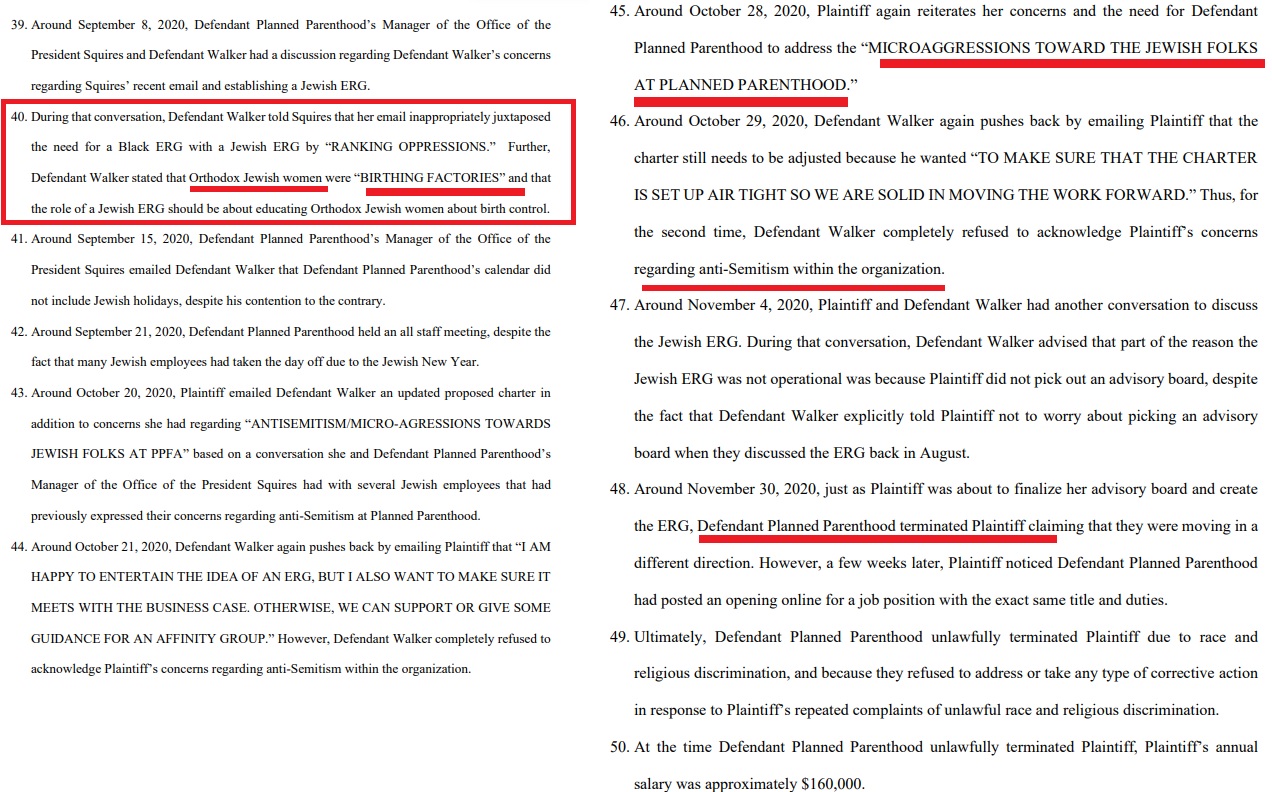 In their motion for summary judgement, Planned Parenthood claimed that Moreno was being mischaracterized and had been “hearing a chorus of concerns” about Gamza “from colleagues.” They also denied the antisemitism charges, writing, “Plaintiff claims that she was fired from PPFA because she is Jewish. Zero evidence supports this accusation. Following a full year of discovery, the record is both clear and overwhelming: Plaintiff was an at-will employee who was terminated from PPFA solely because of her poor job performance.”

Planned Parenthood wrote in defense, “In this lawsuit, Plaintiff concocts an alternative reality. She claims that PPFA and Moreno fired her because she was Jewish—a narrative that is particularly bizarre given that Moreno herself is Jewish.”

“The Jewish ERG was approved by PPFA before Plaintiff was terminated and remains active to this day,” Planned Parenthood added.

While Planned Parenthood acknowledged that “Walker… did make one unintentionally offensive comment” they referred to Gamza’s “microaggressions” as both “unsupported and lack[ing] any connection to her termination.”

But Gamza in her lawsuit doubled down, referring to Planned Parenthood’s actions as “discriminatory and intolerable treatment,” alleging that as a result, she “felt extremely humiliated, degraded, victimized, embarrassed, and emotionally distressed” and saying she “suffered and continues to suffer severe emotional distress and physical ailments including extreme anxiety and severe depression.”

Further, Gamza’s complaint alleged that Planned Parenthood “engaged in an unlawful discriminatory practice by retaliating, terminating, and otherwise discriminating against Plaintiff with respect to the terms, conditions or privileges of employment because of Plaintiff’s opposition to the unlawful practices of Defendants.”

According to Buzzfeed News, “The case is ongoing in a Manhattan federal court, and the defendants’ motion to dismiss was struck down by a judge in June this year.”