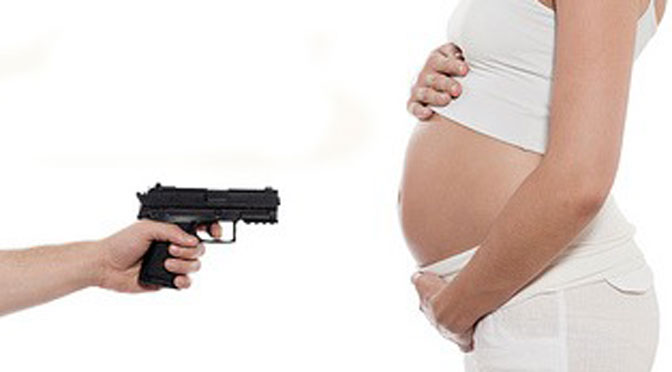 The latest pro-abortion attempt to score political points with the Orlando terrorist attack is less of a reach than Jodi Jacobson’s, but not by much. The Huffington Post has published a satire piece by James Schlarmann of the fake news site Political Garbage Chute, attempting to illustrate the hypocrisy of Florida supposedly making it easier to get a rifle than to get an abortion.

The “report’s” lead character is Jane Sampson, who wants an abortion because—why else?—she was raped. In real life, rape accounts for just one percent of abortions, but in the wonderful world of fiction pro-aborts get to stack all the variables they want in their favor (even while complaining that Hollywood’s already pro-abortion output isn’t statistically representative enough).

“I was so angry and sad,” Sampson told our reporter via Skype, “because I had already been horribly violated and traumatized. Then, a month after I was raped I find out I’m pregnant with that scumbag’s seed? I wanted it out of me right then and there. And in America an abortion is my constitutional right; it has been for decades. But not in red-ass Florida.”

“Scumbag’s seed” isn’t quite as dehumanizing as “spawn,” but it’s up there, as slurs against innocent people for other people’s crimes go. And in this case, the fictional ranting of a male author can’t even hide behind the understanding we would owe to a real-life rape victim speaking out of emotion and trauma.

“Unfortunately,” Sampson finds that Florida makes people wait 24 hours before getting abortions. But she manages to abort anyway, because there was no waiting period for buying an AR-15 (which isn’t the gun the Orlando shooter used, by the way), plus some fictional “U-Abort It rifle accessories.”

Aside from the sick mind it must have taken to conjure aborting a baby with an AR-15, what really stands out is the cognitive dissonance. The entire scenario of using a gun as an abortion tool only works because guns kill…yet apparently nobody realized they were drawing attention to the fact that abortion, the thing they’re defending as so much more respectable than “weapons of wanton death and destruction,” also kills.

Moral blinders notwithstanding, Schlarmann’s point is based on contrasting the day-long abortion wait with news reports that it can take as little as 38 minutes to buy an AR-15 in the same state. The hypocrisy! The danger! The heartless backward priorities!

Well, maybe it’s hypocritical in Schlarmann and HuffPo’s fictional Florida, but in the real one there are more conditions than that: to buy a rifle in the state, you also need to have no record of felonies, domestic abuse, substance abuse, or mental illness, no restraining orders, and no more than one DUI conviction, and all gun purchases through federally licensed dealers require a background check, even for someone who already has a permit for a concealed weapon—all conditions you don’t need to satisfy to get an abortion.

Kinda leaves poor James without a point, doesn’t it?

“It turns out, my state isn’t the only one that sees zero irony in making weapons of wanton death and destruction easy to get while making a safe and legal, constitutionally protected medical service as hard to have performed as possible,” Jane told us, “and so Bushmaster developed a whole product line for red state women like me who still want to have control over our own reproduction, silly us.”

Because Schlarmann couldn’t get the facts of the news story he was satirizing correctly, it’s to be expected that he would also flunk the background info. Thus, we get lectured about irony when the real irony is that abortion is also a weapon of needless death (in fact, a gun only murders when misused; abortion murders every time) and claiming the “constitutionally protected” right is the thing the Constitution doesn’t mention rather than the one it does.

Finally, the comparison between gun and abortion restrictions can just as easily be used to make the opposite point, as J. Adam Meyer’s own satire piece at the Federalist shows:

She filled out some forms requiring her consent, proof of ability to pay the fee, along with adequate insurance, and a few basic questions about any past health issues. The doctor informed her of the typical loose state non-requirements: no parental consent, no disturbing information distributed about the baby’s experience during the procedure, and no surgical center requirements. No hassle, no problem.

All told, it took 57 minutes and a $450 co-pay for her to walk out of the clinic legally free of her pre-natal nuisance […]

“Generally, killing is subject to more extensive restrictions,” one expert explained. “Abortions are used far more often to end a life than are guns. Our patchwork quilt of abortion laws is destined to be ineffective.”