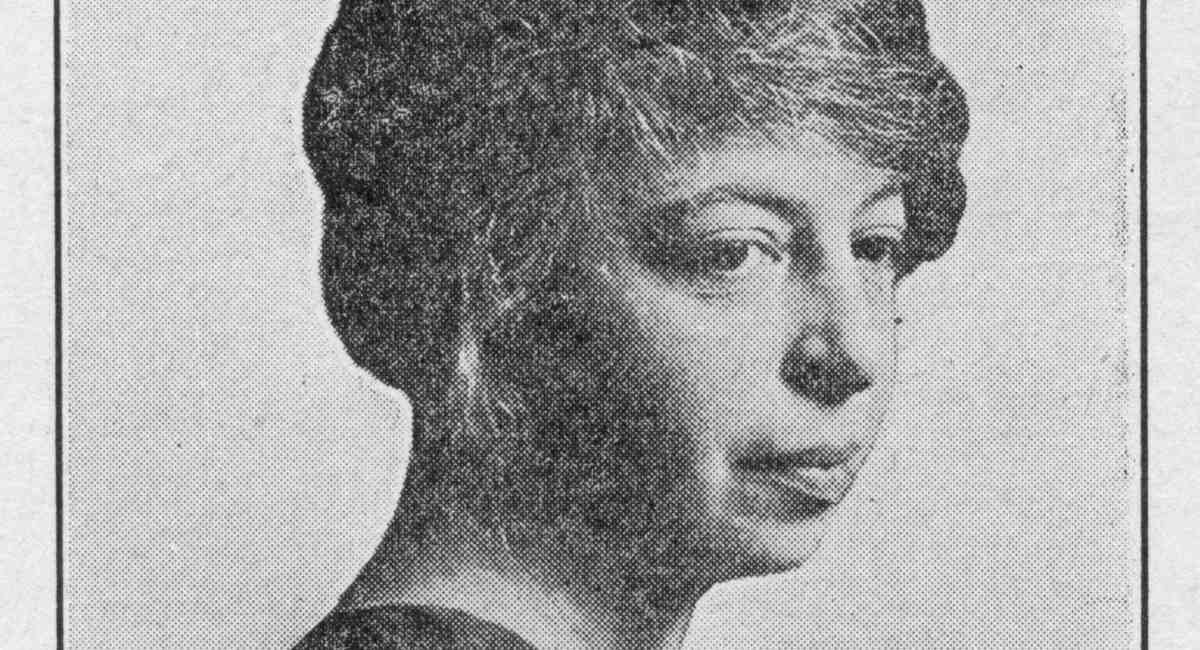 Born in 1880, writer and civil rights activist Angelina Weld Grimké focused much of her writing on the suffering of slaves and how those sufferings had a deeply negative impact on Black motherhood. The effects of the eugenics and discrimination faced by Black Americans during the days of slavery and after have sadly never fully disappeared from American society and continue to harm Black mothers and their children.

Grimké was the daughter of Archibald Grimké, the second Black man to graduate from Harvard law school and the vice-president of the NAACP, who himself was born into slavery. He was the son of slave Nancy Weston and slave owner Henry Grimké, and he named his daughter after his aunt Angelina Grimké Weld — an abolitionist who, along with her sister Sarah, took in and provided an education to the children their brother fathered with slaves — including young Archibald.

Angelina Grimké’s mother was a white woman who was allegedly placed in a hospital due to mental health issues when Grimké was very young. As the only child of the married couple, she grew up extremely close to her father, and after his death, never published her writings again.

A lesbian who never had children of her own, Grimké held motherhood in high regard and thought it to be a central part of what it means to be a woman. She helped to raise the children of family members and advocated for biological mothers and voluntary mothers, as her great aunts had also done. Through her writings, she aimed to enlighten white women on the sufferings of Black women and their children.

“If anything can make all women sisters beneath their skin, it is motherhood,” she said. “If then the white women of this country could see, feel, understand just what effect their prejudice and the prejudice of their fathers, brothers, husbands, sons were having on the souls of the colored mothers everywhere, and upon the mothers that are to be, a great power to effect public opinion would be set free and the battle would be half won.” 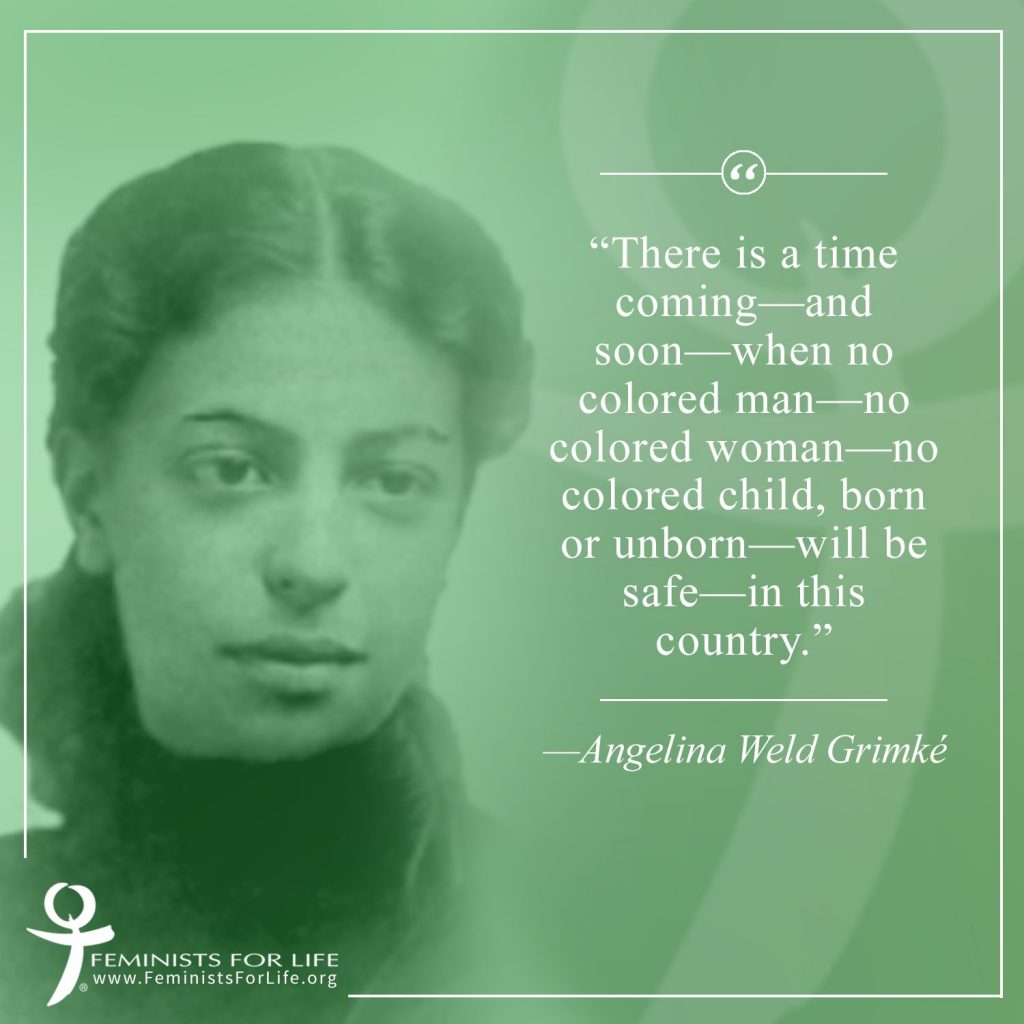 Exposing the desperation and mistreatment of Black mothers and children

In her 1919 short story “The Closing Door,” she wrote of a Black woman who has an emotional breakdown during her pregnancy. Following her brother’s lynching, this woman sees herself as an “instrument” existing solely to produce more Black people for white men to enslave, beat, and kill. Though the woman and the baby survive the pregnancy and delivery, the woman is haunted by the sufferings around them and struggles to bond with her baby whom she very much loves and wants. But in the story, she eventually suffocates her baby, and later dies in prison.

In her 1919 stories, “Blackness” and “Goldie,” the torture and subsequent murder of a Black pregnant woman includes a forced abortion at the hands of a white mob. According to Feminists for Life, Grimké told the white editors of her story that the incident was based on a real event in which a mob tied the woman to a tree and set her on fire. She wrote:

While the woman shrieked and writhed in agony, a man, who had brought with him a knife used in the butchering of animals, ripped her abdomen wide open. Her unborn child fell to the ground at her feet. It emitted one or two little cries but was soon silenced by brutal boots that crushed the head. Death came at last to the poor woman.

Illinois Right to Life notes that in her writings, Grimké “painted a picture of the pain caused by abortion and a lack of respect for black lives born and unborn.” Unfortunately, that lack of respect still exists today, more than 60 years after Grimké’s death.

Abortion as one of ‘many abuses against people of color’

Black women are still suffering the horror of coerced abortion and there is a large push to force American taxpayers to pay for certain children to be killed in the womb — a push which proponents claim will do away with a “racist” measure preventing poor and largely minority women from obtaining taxpayer-funded abortions. President Joe Biden has promised to end the Hyde Amendment after more than four decades of bipartisan support. Without the Hyde Amendment, disadvantaged minority women will face even more pressure to abort their children — and the U.S. government will pay to have those babies killed. Black Americans now make up 12.1% of the population yet Black women account for about 34% of all abortions. If the Hyde Amendment ends, that percentage could climb — and the U.S. government will be acting as the man crushing Black babies with his boot.

“This is a government that has had so many abuses against people of color, and to think that on top of that, it’s going to fund abortion!” pro-life activist Christina Bennett told a Congressional subcommittee regarding Hyde. “[It is] at the least irresponsible and at the most sinister to allow the federal government with a history of eugenics, slavery, Jim Crow laws, and other forms of systemic racism to pay for-profit organizations to end the lives of the vulnerable.”

In addition, Black women are three times more likely to die from a pregnancy-related complication than white women, according to the CDC. And Black babies face double the risk of dying before their first birthday compared with babies of any other race. In New York City, Black women are eight times more likely to die from a pregnancy complication than white women. Doctors have a tendency to play down a woman’s symptoms and medical complaints, but they are even more likely to do so if that woman is Black.

Grimké knew that the poor treatment of Black Americans would lead to poor maternal outcomes and the deaths of Black children. She also knew that it would take other people — white women, in her opinion — to help end the discrimination and abuse. Every woman should be fighting for the rights of all women to be mothers to their children — free from the pressure and expectation of abortion — and able to receive equal treatment under the law and medicine.