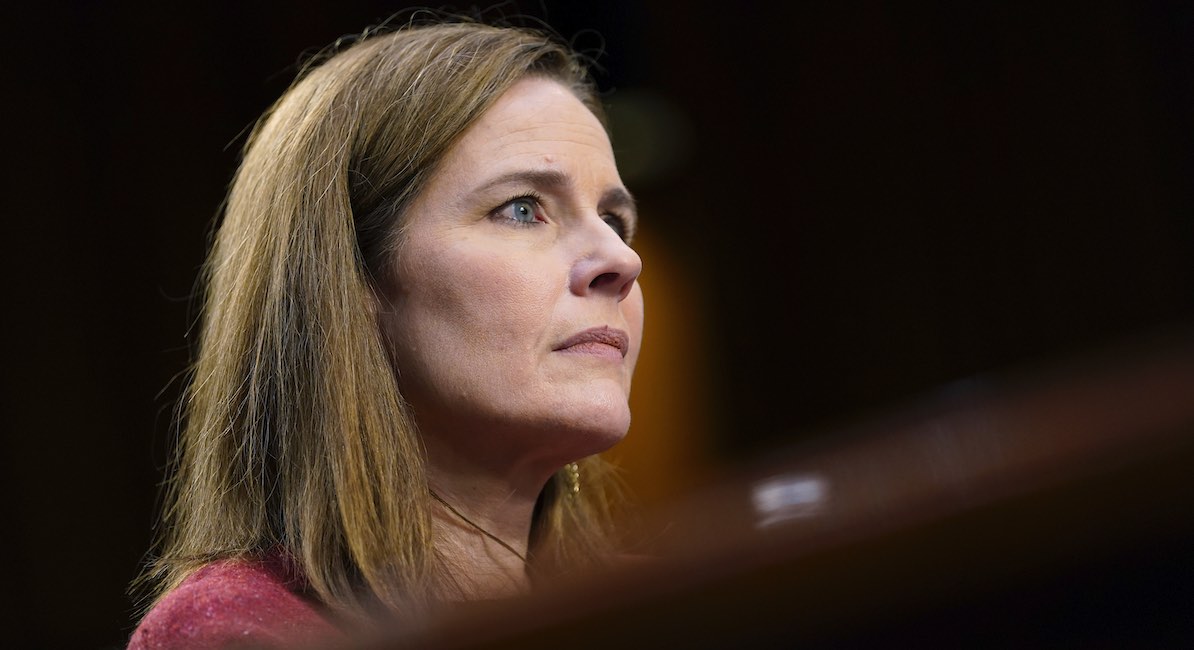 During Judge Amy Coney Barrett’s second day of confirmation hearings in the Senate Judiciary Committee, nearly every senator on the committee asked about her views on Roe v. Wade, the 1973 case establishing legal abortion throughout the United States.

Despite describing herself as a textualist and an originalist, Judge Barrett insisted she is not a carbon-copy of her mentor, the late Justice Antonin Scalia—who in his nearly 30 years on the Supreme Court ruled in favor of effectively overruling Roe v. Wade in his dissent in Planned Parenthood v. Casey. “Not all originalists agree,” she told Senator Lindsey Graham (R-S.C.). 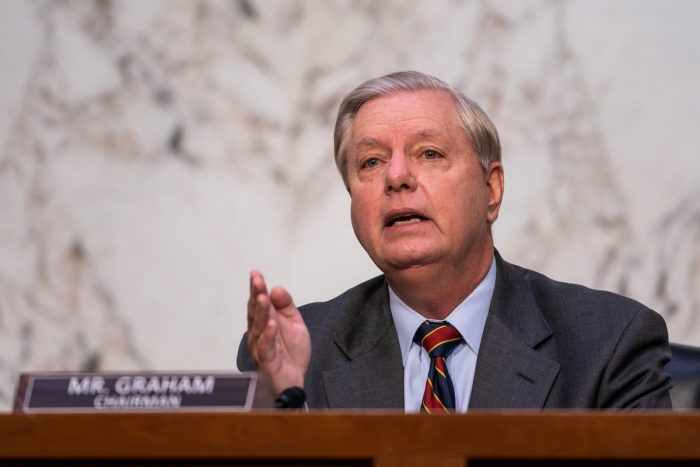 Barrett also explained judges cannot rule with agendas and must wait for “cases and controversy” in order to decide on issues like abortion.

Graham then discussed his bill that would disallow abortion on demand after five months, saying “it must be a terrible death to be dismembered by abortion.” He asked Barrett if this law was challenged, whether she would be able to “listen to both sides.”

Graham also pressed Judge Barrett on her thoughts about “substantive due process,” which is the judicial doctrine that creates the unwritten constitutional rights to abortion and birth control. Barrett agreed it is fair to say there is a “great debate” about the limitations of these rights.

“Have precedents of the Court been overruled before?” Graham asked.

Barrett replied that Brown v. Board of Education overruled Plessy v. Ferguson, to end the legal regime of “separate but equal” for racial segregation.

Senator Dianne Feinstein (D-Calif.), who in a 2017 hearing for Judge Barrett’s nomination to the Seventh Circuit said the dogma of Barrett’s Catholic faith “lives loudly” in Barrett, preceded her questioning of Barrett by asking the judge to introduce her children. 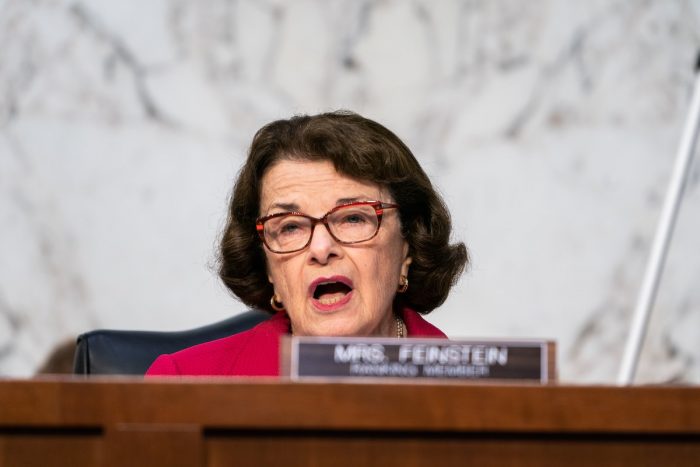 After praising Judge Barrett as a mother, the senator shifted focus to a “woman’s fundamental right” to abortion, quoting the late Justice Ruth Bader Ginsburg, saying, “the decision whether or not to bear a child is central to a woman’s life, to her wellbeing and dignity.” She then asked Barrett, “Do you agree with Justice Scalia’s view that Roe was wrongly decided?”

Barrett invoked Justice Kagan, saying she would not “grade precedent,” and furthermore that, “in an area where precedent continues to be pressed and litigated, as is true of Casey, it would be… wrong and a violation of the canons for me to do that as a sitting judge.” Barrett explained that sitting judges should not give a thumbs-up or thumbs-down to precedent because it would signal an improper bias to potential litigants.

Feinstein continued to press the issue. “It’s distressing not to get a straight answer,” Feinstein said.

Then referring back to Barrett’s “lovely family,” Feinstein said, “You understand all the implications of family life,” and asked Judge Barrett to “commit” herself to a position on Casey. Barrett again promised to “follow the law” for abortion or any other issue that comes before the Court.

Senator Patrick Leahy (D-Vt.) asked Judge Barrett about her Seventh Circuit opinion reviewing an Indiana law that required the remains of aborted children to be disposed of by burial or cremation. Leahy pointed out that the dissent she joined called the Indiana law a “eugenics statute.”

Barrett explained that the Supreme Court eventually reversed the Seventh Circuit and upheld the Indiana law’s provision on fetal remains, but the “eugenics portion” of the law prohibiting racial, gender, or disability-based abortions was an open question for the Supreme Court.

Leahy then asked Barrett about a 2006 open letter she signed as a private citizen, opposing abortion on demand and defending the right to life. The letter appeared as a newspaper insert next to an advertisement by St. Joseph County Right to Life, which described the legacy of Roe as “barbaric.” Barrett confirmed she signed the letter, but did not recall if she had seen the advertisement mentioning Roe, nor had she recalled signing the letter until it was recently brought to her attention.

“I signed it on the way out of church—it was consistent with the views of my church—and it simply said we support the right to life from conception to natural death.” She went onto say that her personal views “don’t have anything to do with the way” she would decide cases. 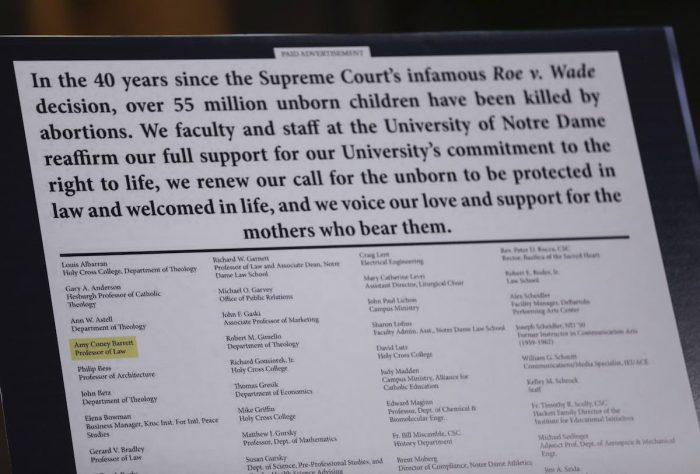 WASHINGTON, DC – OCTOBER 13: A reproduction of a political ad highlighting the name of U.S. Supreme Court nominee Judge Amy Coney Barrett is displayed during the Senate Judiciary Committee on the second day of her Supreme Court confirmation hearing on Capitol Hill on October 13, 2020 in Washington, DC. With less than a month until the presidential election, President Donald Trump tapped Amy Coney Barrett to be his third Supreme Court nominee in just four years. If confirmed, Barrett would replace the late Associate Justice Ruth Bader Ginsburg. (Photo by Leah Millis-Pool/Getty Images)

Senator Sheldon Whitehouse (D-R.I.) discussed the “high stakes” of President Trump’s insistence that he would only appoint judges willing to overrule Roe, mentioning the pro-life Susan B. Anthony List’s advertisements in support of Judge Barrett, and other nonprofit groups supporting the President’s judicial nominees.

Senator Ted Cruz (R-Texas) said that if Roe were overruled, the question would revert to elected state and federal legislators. Cruz suggested states like California and New York would likely continue to permit “unrestricted access to abortion,” calling this position “radical.”

Senator Amy Klobuchar (D-Minn.) asked Judge Barrett if she thought Roe is “super precedent.” Barrett described the informal term as referring to “cases that are so well settled that no political actors and no people seriously push for their overruling.” Barrett noted that she is being asked so many questions about Roe “indicates that Roe doesn’t fall in that category.”

“That doesn’t mean that Roe should be overruled,” Barrett said, “it just means that it doesn’t fall on the small handful of cases like Marbury v. Madison and [Brown v. Board of Education] that no one questions anymore.”

Senator Josh Hawley (R-Mo.) asked Judge Barrett again about the open letter she signed affirming her support protecting life from conception until natural death. Barrett confirmed that this is the position of the Catholic Church on abortion, but clarified that her task of applying the law as a judge is “distinct” from her “personal moral religious views.” She went on to say that she signed the statement 15 years ago and that it would be inappropriate for her to now express her “private views” as a public official.

Senator Hawley emphasized that Article VI of the Constitution prohibits religious tests as a condition for holding public office.

Senator Richard Blumenthal (D-Conn.) raised concerns about the 2006 open letter, asking whether Barrett had disclosed this letter when she was nominated to the Seventh Circuit in 2017. Barrett replied that she had not recalled signing the letter at the time of her 2017 nomination, but that she provided over 1,800 pages of disclosures. She also said she did not feel the letter was responsive to the questionnaire requesting these disclosures, but nonetheless supplemented her disclosures to include the letter. 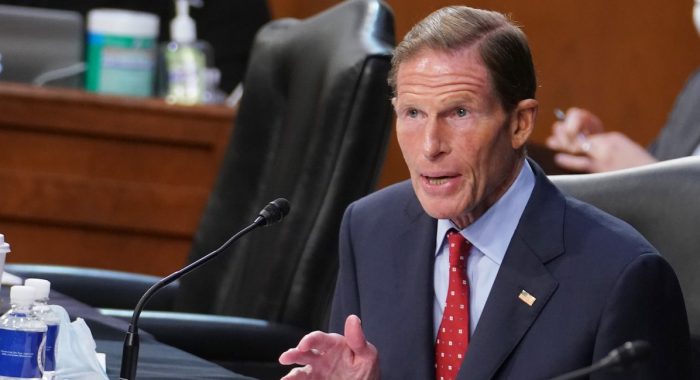 WASHINGTON, DC – OCTOBER 13: Sen. Richard Blumenthal speaks when Judge Amy Coney Barrett appears before the Senate Judiciary Committee on day two of her confirmation hearings to become an Associate Justice of the U.S. Supreme Court, on October 13, 2020 in Washington, DC. Barrett was nominated by President Donald Trump to fill the vacancy left by Justice Ruth Bader Ginsburg who passed away in September. (Photo by Sarah Silbiger-Pool/Getty Images)

Blumenthal also discussed a 2013 letter she signed onto that described Roe as “infamous.” The letter was sponsored by University Faculty for Life at Notre Dame. Barrett confirmed to having been a member of the group and having signed the letter.

Blumenthal then described a victim of rape named “Samantha” who found out she was pregnant and decided to get an abortion. He then reminded Barrett that the St. Joseph County Right to Life’s advertisement said “abortion is never the right answer, even in cases of sexual assault.” Judge Barrett told Blumenthal that the statement she signed did not mention rape or incest, but “simply validated the teaching of my church on the sacredness of life from conception to natural death.”

Blumenthal insisted that Judge Barrett state whether she thinks “Roe was correctly decided.” Judge Barrett again refused to take a position, replying, “As I’ve said to others of your colleagues… it’s inconsistent with the duties of a sitting judge… to take positions on cases that Court has decided in the past.”

Blumenthal then mentioned a woman named “Tracy,” who was diagnosed with endometriosis, preventing her from “getting and staying pregnant.” He then asked Judge Barrett if it would be constitutional to criminalize in vitro fertilization (IVF). Judge Barrett refused to express her private views, and said it is not appropriate for judges to “answer questions in the abstract” about how she might rule on a case. He asked the same hypothetical question with regard to criminalizing the actions of abortionists, to which Barrett gave a similar response.

Reading the 2013 statement by the University Faculty for Life, Senator Blumenthal asked Judge Barrett what it means for “the unborn to be protected in law.” Judge Barrett said the statement was “an affirmation of life” and affirmed support for “women in crisis pregnancies” and to “support babies.”

“It’s really no more than the expression of a pro-life view,” she said.

Finally, Senator Mazie Hirono (D-Hawaii) mentioned that both President Trump and Senator Hawley had made statements suggesting they expected Judge Barrett to overruled Roe. Judge Barrett repeated that she “made no promises to anyone” and has “no agenda.” Hirono brought up numerous cases concerning state restrictions on abortion that may be working their way toward the Supreme Court, concluding, “That is why a lot of people are concerned.”

The Q&A portion of the hearings is expected to continue through Wednesday. On Thursday, the final day of the hearings, outside witnesses will testify for and against Judge Barrett’s confirmation.