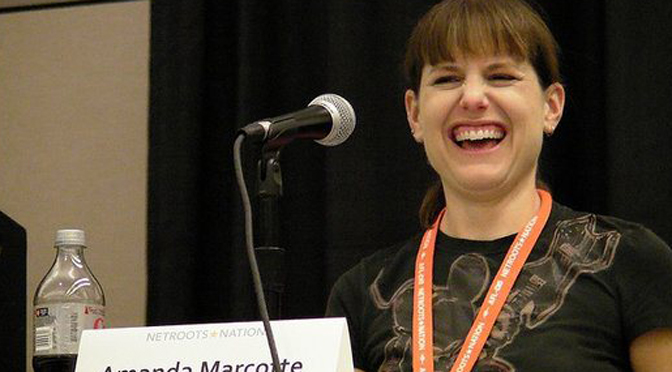 If you thought Amanda Marcotte the biologist was bad, just wait ’til you meet Amanda Marcotte the constitutional scholar. At RH Reality Check, she rails against conservatives for “reinterpreting, denouncing, or flat-out lying about the 14th Amendment these days” in order to perpetuate one of our “favorite myths”—that “women are not to be trusted to handle their own reproduction.”

After a legally and historically wrong discussion of the controversy over whether the 14th Amendment grants citizenship to children of illegal immigrants born on US soil (what is it with these self-described “reproductive health” outfits promoting left-wing narratives on unrelated issues?), Marcotte transitions to a screed about the Amendment’s abortion implications that would border on constitutionally illiterate if she hadn’t given us so many reasons to believe the obtuseness is premeditated…

Mike Huckabee has taken to running around claiming that the 14th Amendment should be interpreted as a ban on abortion, even though the Supreme Court has repeatedly upheld abortion as a legal right.

Something tells me Amanda wouldn’t be so quick to accept “SCOTUS said so!” as settling constitutionality questions in Gonzales v. Carhart, Burwell v. Hobby Lobby, or Citizens United. Something also tells me we shouldn’t expect her to grapple with the number of people on her own side who admit Roe v. Wade is a sham.

Let’s set aside for now the fact that Huckabee is claiming that the president should basically become a dictator who ignores rule of law.

Listen, I had problems with Huckabee’s National Guard talk too, but let’s not pretend that floating a dubious (and probably unserious) means of enforcing something the Constitution actually says is somehow less democratic than the Supreme Court dictating something it does not.

Many actual legal scholars, Justice Ruth Bader Ginsburg especially, say the opposite: That the Supreme Court should have invoked the 14th Amendment to protect abortion rights in 1973, on the grounds that women are citizens and, as citizens, should have equal rights to bodily autonomy as men.

Pure nonsense. There is no basis for such an interpretation in the Constitution’s text, and no legal or historical evidence that anyone who inspired, authored, or ratified the Constitution up to the 14th Amendment believed in it. As Justice William Rehnquist explained in his Planned Parenthood v. Casey dissent, the “common law which we inherited from England made abortion after ‘quickening’ an offense,” and “[a]t the time of the adoption of the Fourteenth Amendment, statutory prohibitions or restrictions on abortion were commonplace.” And the quickening factor was a question of our scientific knowledge’s limitations and their impact on evidentiary standards, not any sort of postmodern, pseudo-feminist bodily-autonomy affirmation.

Huckabee, clearly thinking he’s got a real “gotcha” here, is arguing the opposite: that embryos are actually citizens. By necessity, though he doesn’t explain this outright, his argument would go on to hold that women therefore cannot be citizens. As Amanda Taub of Vox points out, not being forced to give up part of your body to another person is a basic human right, even if they need it to live. So it’s not enough to declare embryos are people in order to compel women to give up our bodies to nourish them. We must also and by necessity declare women to be non-persons in order to get there. Huckabee doesn’t say that part, but his argument doesn’t work without it.

Sheer lunacy. Citizenship does entail a right against involuntary servitude, but contrary to pseudo-feminist dogma, pregnancy doesn’t fit that description. In 99% of cases, the mother voluntarily assumed the risk of creating a child for whom she would be responsible. According to the Constitution’s Lockean natural-law underpinnings, fetuses have a natural right to be gestated until birth. And even if we conceded the fetus was infringing on Mom’s rights, the force with which we defend ourselves must be proportionate—if I own a boat and a six-year-old sneaks aboard before I take it out, I don’t have the right to throw him overboard in the middle of a lake. Ultimately, equal protection requires the sexes to be treated equally in like situations; it doesn’t require us to abandon reason and justice in order to compensate when biology subjects the sexes to inherently dissimilar situations.

Of course, even to get there, you have to ignore a word that, as it happens, is the same word that anti-immigrant conservatives ignore with their novel interpretations of the 14th Amendment: born. It’s right there in the first sentence of the 14th Amendment: “All persons born or naturalized in the United States, and subject to the jurisdiction thereof, are citizens of the United States and of the state wherein they reside.” (Emphasis added.) Born, as in when you came out of your mother’s body. Not when your mother’s DNA merged with your father’s nine-and-a-half months before.

Oh, what I would give to see Amanda Marcotte actually have to back up this mess of falsehood and oversimplification in a debate with someone knowledgeable on the subject! (Sadly, that probably won’t be me anytime soon, considering that she blocked me on Twitter years ago because debate is scary when the opponent knows you’re lying.)

The 14th Amendment first says, “All persons born or naturalized in the United States, and subject to the jurisdiction thereof, are citizens.” Fair enough, that means fetuses aren’t entitled to the “privileges or immunities of citizens,” such as the right to vote. However, it then says “nor [setting up a separate and distinct clause] shall any state deprive any person of life, liberty, or property, without due process of law; nor deny to any person within its jurisdiction the equal protection of the laws” (emphasis added). Why is no mystery—citizenship comes with all sorts of unique benefits that make it precious, but it obviously shouldn’t mean that non-citizens can be subjected to whatever somebody wants to do to them.

The 14th Amendment’s primary drafter, Rep. John Bingham, expressly stated this language was mean to apply to “any human being” (and sorry, Amanda, but science says that includes the preborn). James Wilson and William Blackstone, the preeminent legal minds influencing the Founding Fathers’ philosophy, taught that the right to life begins well before birth.

With that, we close the way Amanda Marcotte diatribes always close: demagogic armchair psychoanalysis of her opponents, despite utterly failing to refute our case on the merits:

All these attacks on the 14th Amendment are ultimately about undermining the importance of birth, an act for which you need a uterus. No surprise that the supporters of male dominance want to shift focus away from “giving birth” to something else, something cisgender men can do—ejaculate, write something on a piece of paper—as the real moment when someone becomes a citizen. But our laws should be built around what works best for our country and the people in it, all the people in it, and not just the hurt feelings of a bunch of male egotists.

She gets wrong every single objective question at hand—constitutional text, legal history, authorial intent, ratifiers’ understanding, natural rights theory, human biology—yet hubris empowers her to overlook all that and pretend pro-lifers are the ones animated by gender-obsessed ego. What pro-abortion radicals lack in self-awareness they more than make up for in projection.