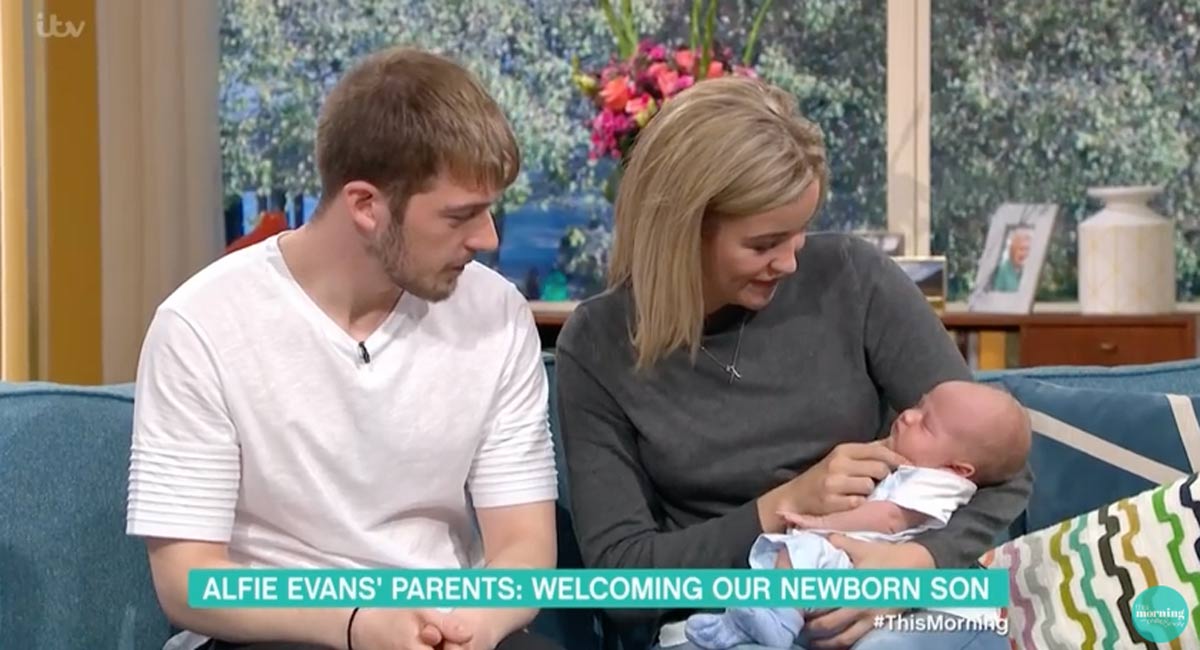 Thomas Evans and Kate James, the parents of 23-month-old Alfie Evans, who passed away nearly five days after UK courts refused to allow him to remain on life support or travel to another country for treatment, appeared on a UK program recently with their second son, Tom, born just four months after Alfie’s death. According to the UK’s Daily Mail, the couple finally learned during Kate’s second pregnancy that they are carriers of a condition which caused Alfie’s significant health difficulties — “a degenerative brain disease called GABA-transaminase deficiency.”

Their newborn son was tested for the same disease but was found not to have the condition. The couple says they have a 25 percent chance of passing the condition on to any children they conceive.

The Daily Mail says Kate told the hosts of This Morning, “We found out after Alfie passed about the condition being passed on through us. And then we were told we have a one in four chance of it happening in more babies. Around June the midwife phone[d] me and said I had to come in. We went in and they explained they found two faulty genes, one from Tom and one in me. I knew there was a chance Tom [their newborn son] could have the same condition but it wasn’t until I was induced that I began to really worry about it and became convinced he had it.”

It was an “agonizing” four day wait for test results, which came back negative. The condition, notes the Daily Mail, displays symptoms such as “seizures, uncontrolled limb movements, exaggerated reflexes, weak muscle tone, and excessive sleepiness,” adding, “Only ten cases have ever been documented, with five dying within the first two years and five young children still living with the condition, but still living with severe neurodevelopmental impairment.”

“Children living with the condition do not usually live past two years of age,” says the article. However, Alfie was denied a chance at further study and treatment by the UK courts and Alder Hey hospital, and his life support removed even though a Rome hospital was prepared to transport and treat him at no cost. We will never know if Alfie would have survived with further treatment.

Kate noted that one of her fears was how she would feel, having another baby after losing her precious Alfie. But she says instead of “resenting” baby Tom as she feared she would, she sees much of his brother in him. “He frowns and stretches like Alfie, he is just a double. When I had him, I wondered ‘what if he does resemble Alfie’, how will I feel. It’s nice to be able to say his name and feel positive,” Kate said.

His father, Thomas, said that sometimes when they say Alfie’s name around baby Tom, he responds with smiles. “We will always have two children, no matter what,” Thomas told the hosts of This Morning. “We’re happy for what we had, and what we have still got because we have two amazing children and we will always have them.”