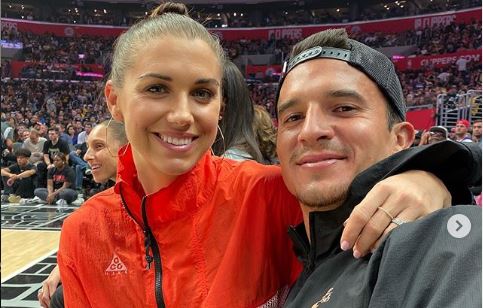 Servando Carrasco and Alex Morgan are a match made in soccer heaven. The couple, who married in 2014, are both major soccer stars; Carrasco plays professionally with the L.A. Galaxy, while Morgan is co-captain of the United States national team, which just dominated in the 2019 World Cup, where she won the Silver Boot award for second-most goals scored. But now, they’re celebrating a new achievement: a new baby girl, due next April.

Carrasco and Morgan announced their pregnancy on Morgan’s Instagram account, posing on a beach with a onesie, and a sign that read “Baby Girl April 2020.” In the caption, Morgan wrote, “We are already in love and we haven’t even met her yet.”

We are already in love and we haven’t even met her yet. Newest member of the Carrasco family, coming soon. 📸 // @hanaasano

Carrasco likewise celebrated the news on Instagram, with a picture of them posing with their two dogs. “Can’t wait to meet my baby girl,” he wrote. They also spoke to PEOPLE about their exciting news. “We are so overjoyed to grow our family,” Morgan said. “She’s the best World Cup gift I could have asked for.”

Their soccer family likewise took the occasion to celebrate with them. “Bringing another powerful woman into the world. Love to see it,” the US Women’s National Team account posted on Instagram. “Congrats [Alex] & Servando! Your #USWNT fam is ecstatic!”

Morgan is the latest elite female athlete to show that motherhood does not get in the way of achieving goals, or that having an amazing career does not keep one from being a mother. Serena Williams, considered to be one of the greatest tennis players of all time, won a Grand Slam tournament while two months pregnant. Kerri Walsh Jennings, a star volleyball player who has won numerous Olympic gold medals, likewise won Olympic gold while pregnant with her daughter Scout, and she credits her children for giving her the drive to succeed.

“She knows she’s golden,” she said of Scout in an interview. “I don’t know if she knows how big of a part she played in that [Olympic win]. My boys certainly do.” Another Olympian, Alysia Montano, is a seven-time United States champion, a two-time American record holder, and she’s won three Olympic medals. She competed in the 2017 USATF Outdoor Championships at almost six months pregnant, her baby bump proudly on display; she had previously competed in the USATF’s USA Outdoor Track and Field Championships in 2014 while eight months pregnant.

Allyson Felix is another Olympic runner, and is the most decorated Track and Field Olympian of all time. She became pregnant, and was almost immediately threatened the loss of her sponsorship by Nike. Felix, however, fought back, successfully pressuring Nike to change their policy towards pregnant athletes, and ensuring that women who play sports will not be punished for having children. Her fight marked a huge victory over pregnancy discrimination for athletes everywhere.

U.S. women’s soccer coach Vlatko Andonovski and general manager Kate Markgraf have shown support for Morgan and her goal of returning to the Olympic team in late July.

“[…] we’re going to do everything in our power, use the resources that the federation is providing, whether it’s high-performance director, staff, anything that we can do on our side to help her get back for the Olympics,” said Andonovski.

These women, together, are making a huge difference for women everywhere. They’re proving that women can do anything — from being Olympic stars to doting mothers — and they don’t have to choose between their children and their dreams.