This week, “AKA Jane Roe”—a documentary hyped by media as the “deathbed confession” of Norma McCorvey, the plaintiff in the Roe v. Wade Supreme Court decision legalizing abortion throughout the U.S.—is being released. But filmmaker Nick Sweeney’s narrative as described by the media varies drastically from the accounts of McCorvey’s longtime pro-life friends. According to Variety, in the film, McCorvey allegedly “admits that anti-abortion groups paid her to switch over to their side in the abortion debate.” The decision to release the film about McCorvey years after her death—when she has no way of clarifying or defending her own alleged comments—has caused many to question the veracity of the film’s potentially heavily edited content. This skepticism appears to be with good reason.

Filmmaker Nick Sweeney isn’t the only person behind the making of this documentary, due to come out weeks before one of the most important Supreme Court decisions the nation has seen since Roe v. Wade. The other names behind the film reveal a heavy pro-abortion, pro-Planned Parenthood bias.

Vice Studios is part of Vice Media, a group known for taking a distinctly pro-abortion position in its reporting. According to IMDB, the film’s executive producers included Vice executives Danny Gabai (the head of Vice Studios) and Natalie Farrey (the head of film at Vice Media) as well as co-producer Elle Malan (a Vice Jr. Film Development Executive). In 2019, Gabai told TBI that “AKA Jane Roe” was “completed right before [McCorvey] passed away, so it was almost the first and last opportunity to get in with her, in depth. The interview was done over a period of time and completed right before she passed away.”

Ventureland (whose Twitter handle has changed to @Venturelandent) is a creative studio founded by Kerstin Emhoff (Twitter handle @keprettybird, mentioned by Sweeney in his tweet, quoted above). It was Ventureland and PRETTYBIRD, a company founded by Emhoff, which helped to produce the film “Ours to Tell” earlier in 2020 for the pro-abortion organizations Planned Parenthood and We Testify: 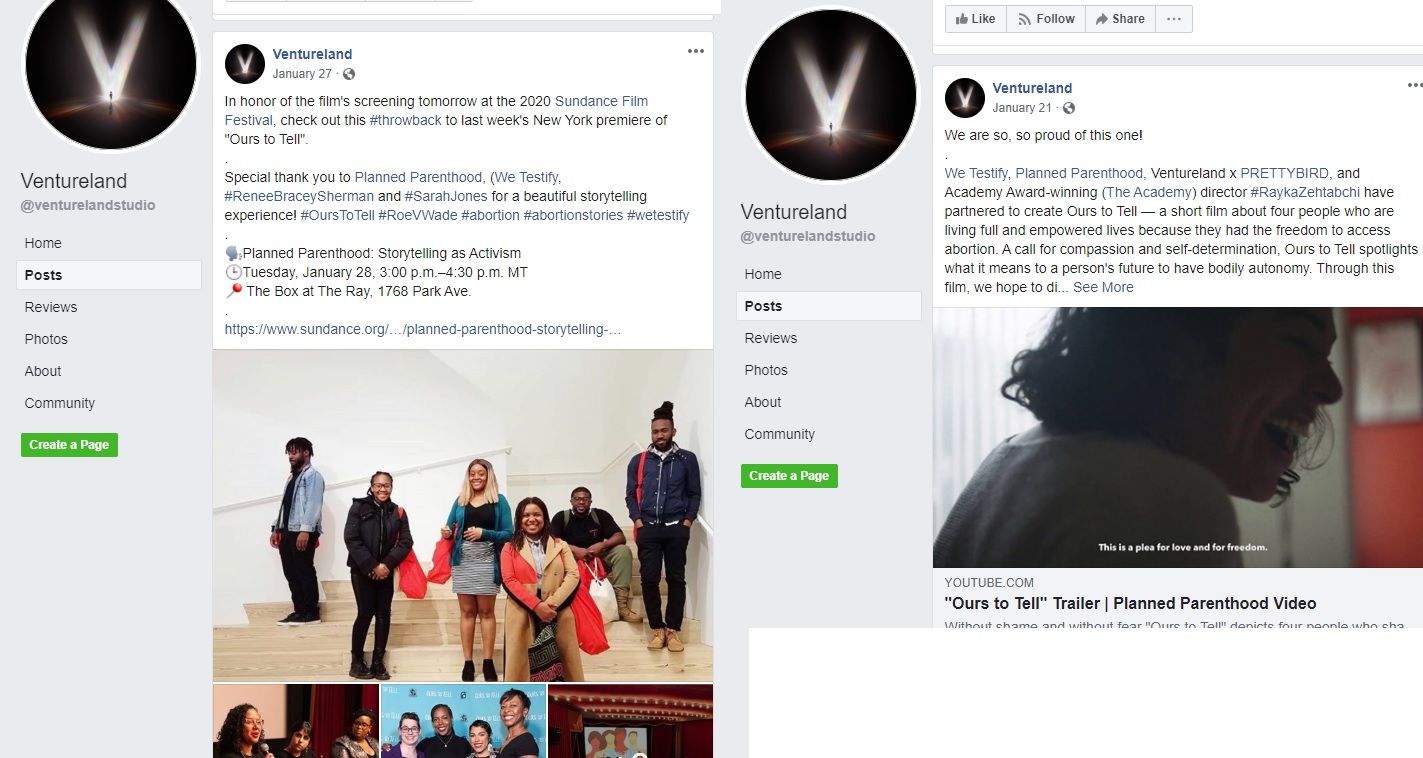 PRETTYBIRD has been involved in projects for abortion business Planned Parenthood. Ventureland and PRETTYBIRD—both co-founded by Kerstin Emhoff—contributed to “Ours To Tell,” a short film for Planned Parenthood and We Testify, directed by Rayka Zehtabchi. In 2016, PRETTYBIRD’s Kirsten Lepore animated the short film, “Planned Parenthood 100 Years,” which glorified founder Margaret Sanger—even soft-peddling Sanger’s undeniable ties to eugenics as part of a “social movement, one with the kind of widespread legitimacy Margaret craved for her own birth control campaign.” The film conveniently left out Sanger’s dealings with the Ku Klux Klan. 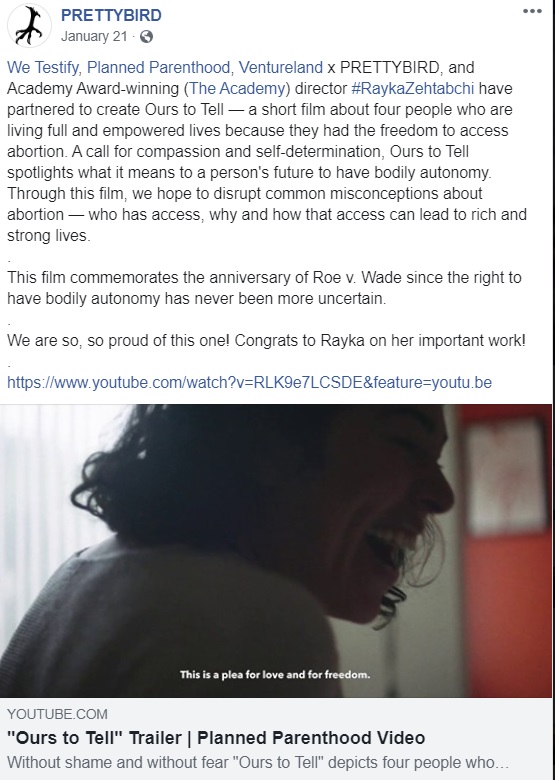 In May, Sweeney identified additional members of the film’s team, including:

Producer Nick Sweeney’s biography is detailed on the PRETTYBIRD website along with a note about “AKA Jane Roe,” which was originally set to release in 2019. No reason has been given for the film’s delay, but the website claims the filmmaker received help from pro-abortion attorney “Gloria Allred, as well as prominent pro-choice and pro-life leaders.”

Yet, interestingly, those closest to McCorvey in her final years appear to have been excluded from that group of “pro-life leaders.” 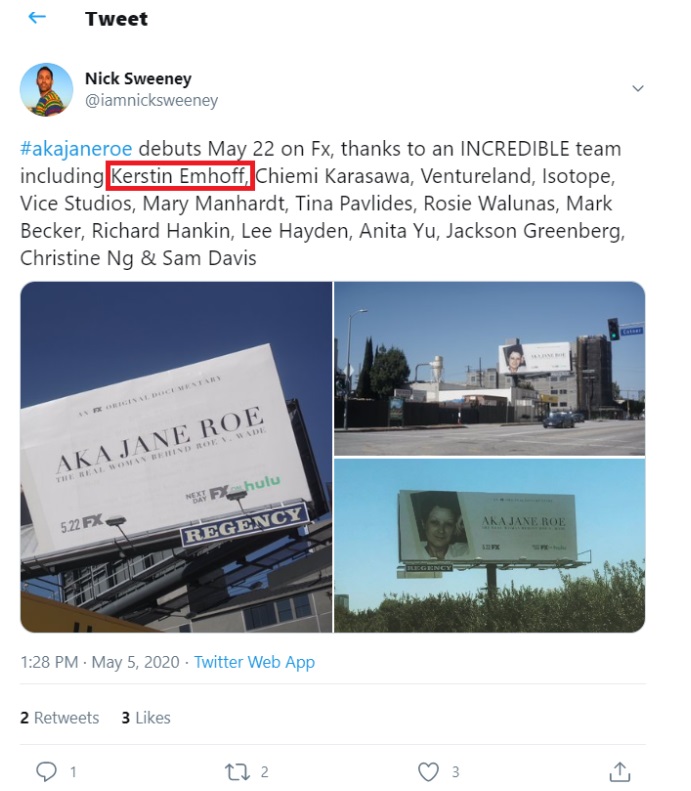 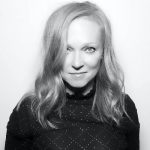 Emhoff, co-founder of both Ventureland and PRETTYBIRD, is listed as part of the post-production team for “AKA Jane Roe.” Emhoff is an influencer with a powerful reach, recently garnering the attention of U.S. Representative Alexandria Ocasio-Cortez (AOC) on Twitter.

Emhoff publicly thanked Sweeney and others “for all of their hard work telling this story.” On May 19th she tweeted what has become the driving narrative of the documentary: “Norma McCorvey, aka Jane Roe, said she was paid to become an anti-abortion crusader.”

Emhoff is the ex-wife of Douglas Emhoff, a man now married to former Democratic presidential candidate Senator Kamala Harris. (During the 2018 hearings involving now-Supreme Court Justice Brett Kavanaugh, Harris was actually caught tweeting a false narrative using a deceptively-edited video taking Kavanaugh’s remarks on birth control out of context. It was so egregious that mainstream media called her out for it.)

In 2019, Kerstin Emhoff tweeted about “co-parenting” with Senator Harris. If a March 2020 tweet by Douglas Emhoff is any indication, the trio seems very cozy. It reads, “Humbled by the amazing, seriously accomplished women right in my own family. @KamalaHarris @keprettybird @mayaharris_@meenaharris and my darling Ella. To name a few.” 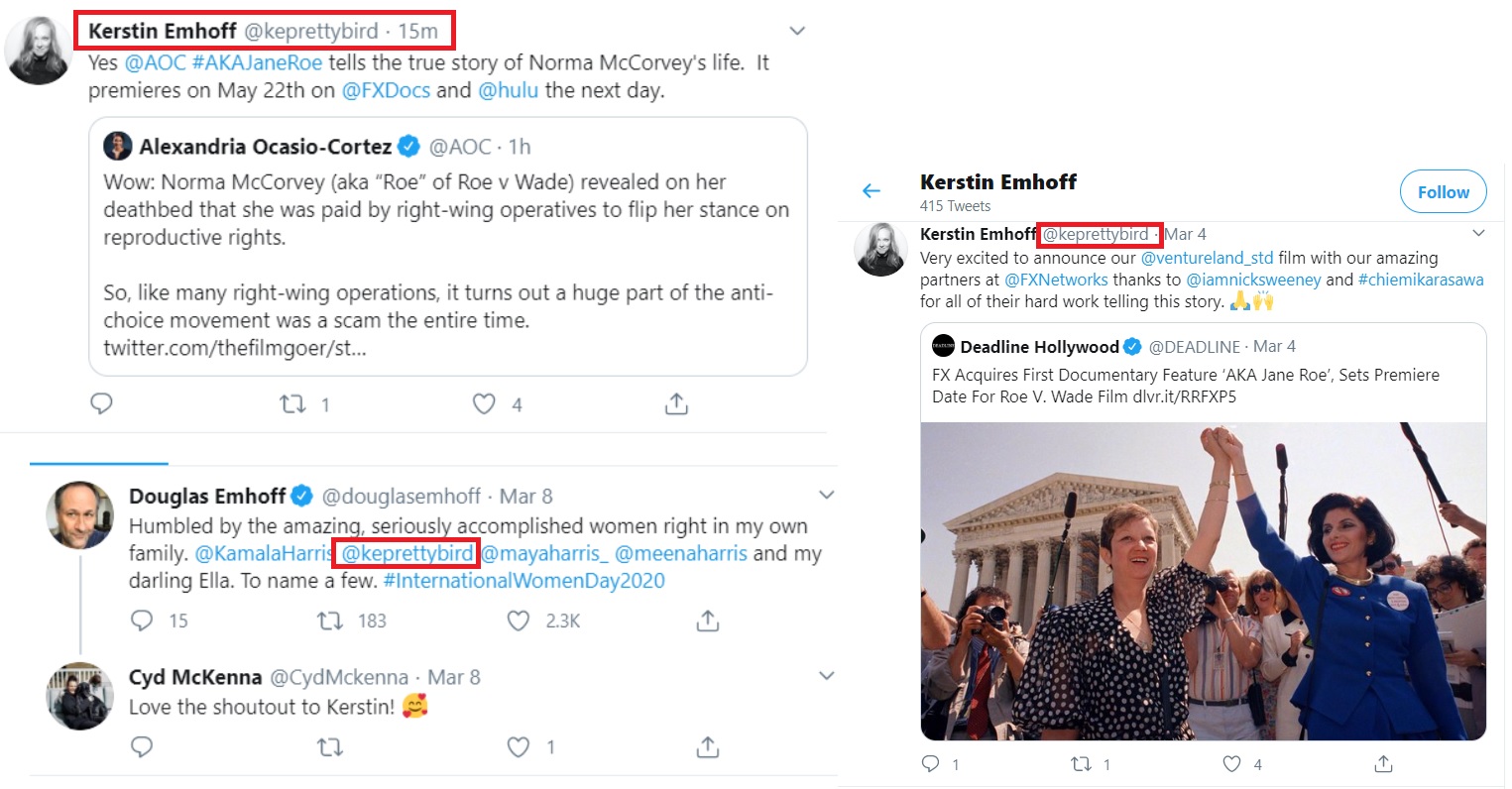 Last year, Emhoff referred to abortion as a “war on women,” writing on her Instagram:

It is shocking that with all the progress I’ve seen in my life so far that this is even being questioned. But we knew this was going to happen on Jan. 21, 2017. This is more than just him, just tweets, just religious radicals hiding in the corners. This is a war on women and we need to fight back with every resource we have. Our voices, votes, economic decision making, any and all means to show that we will not be wearing hoods and red gowns in 2020. #trustwomen #abortionisawomansright 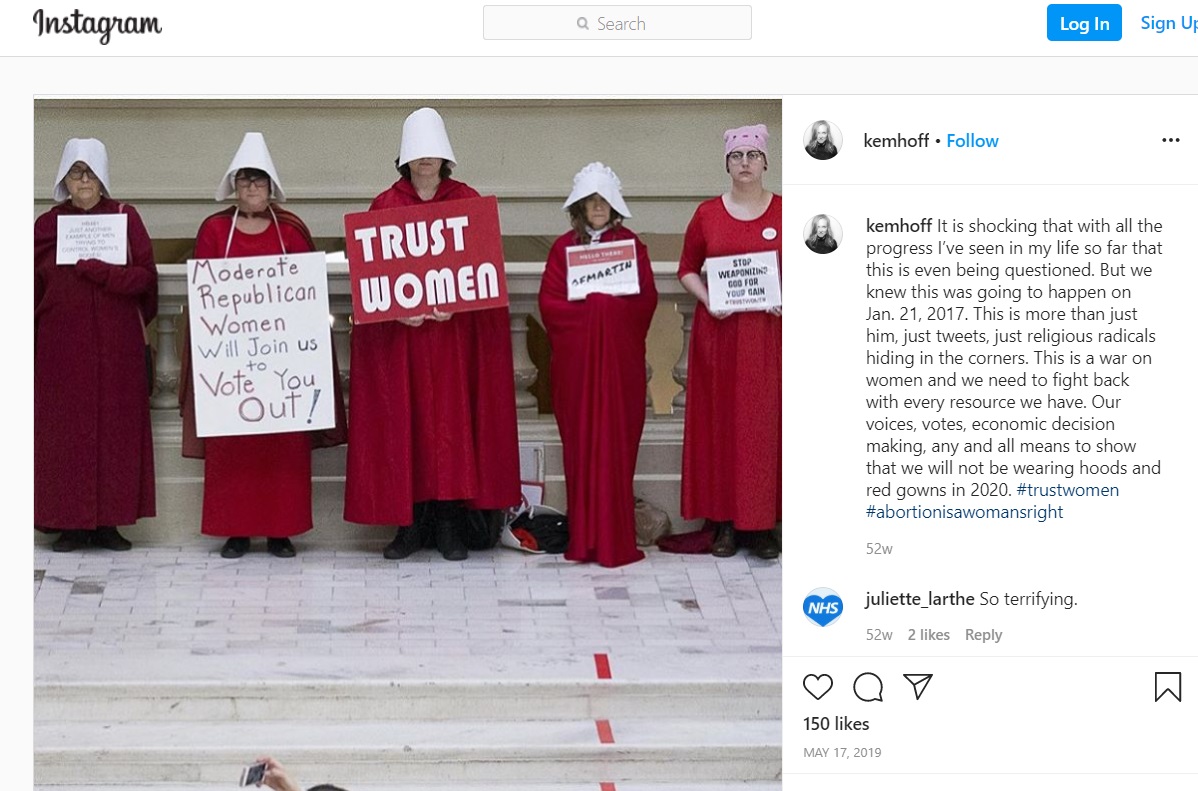 Other members involved with “AKA Jane Roe” have connections to the online media company Ryot, which produces branded VR experiences for nonprofits and large companies, according to Wired report. In 2017, the Twitter account @ThisIsRyot (listing the website Ryot.org) tweeted, “Two things we love: Art & Planned Parenthood. @PPact” 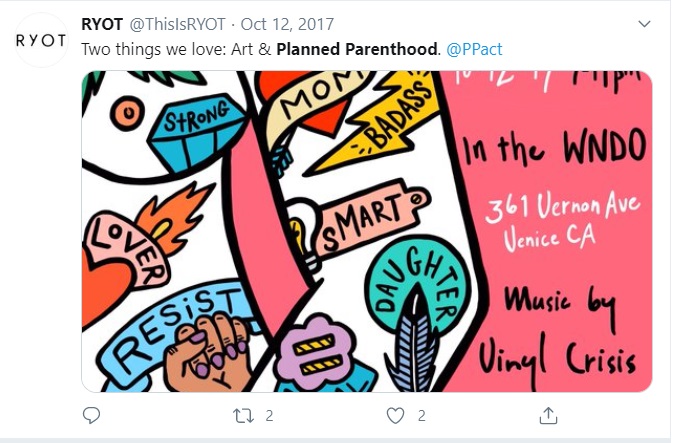 Executive producers with Ryot connections who are associated with “AKA Jane Roe,” according to IMDB, include:

Associate producers Shannon Malone and Ilene Findler were previously involved in the 1990’s film, “Roe vs. Roe: Baptism by Fire.”

According to The Daily Beast, filmmaker Nick Sweeney, a law graduate from the University of New South Wales, claims McCorvey wasn’t paid anything for the documentary, which began filming in May 2016 and continued until McCorvey passed away in February 2017. Whether or not this is the case is something we may never know; McCorvey is now gone, along with her ability to repudiate the film’s claims.

While the pro-life community may never fully understand the motive behind the film or the timing of its release, it is clear that some of those connected to it have a strong pro-abortion bias.