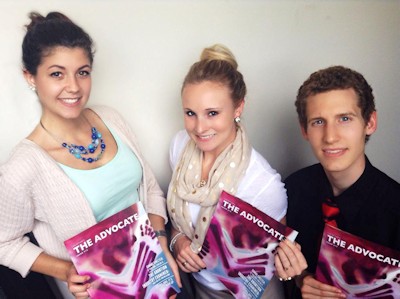 On June 6th, the Live Action summer interns (Erin, Claire and myself) participated in what was our first distribution of The Advocate, or as I will call it, our Advocate adventure. It was a positive, invigorating and challenging experience! Not without its highs and lows, and anything but boring, it was definitely an adventure worth having—one which we will be having many times again.

First, we prepared for our venture by doing a few vital things: we familiarized ourselves with the magazine articles so that we could strike up lively conversations with passersby; we made sure we were amply hydrated and properly attired (It’s nearly summer, so we went casual.); we energized ourselves through prayer and kept each other encouraged; and we took numerous Advocates with us— passing them all out, by the way (and here’s how anyone else can too!).

Then, Erin, Claire and I traveled into downtown DC, to where the truth on abortion is most needed— Planned Parenthood.

When we embarked on our mission we were pretty nervous, though we were resolutely grounded in our pro-life stance and motivation. — Guess what? That’s great, because a little nervous energy can really help when people are out of their comfort zone. 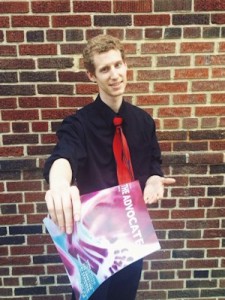 Butterflies swarmed within us and people swarmed around us as we initiated our Advocate-sharing in the midst of rush-hour pandemonium—not exactly a walk in the park, some may say, yet that’s exactly what we did—we began engaging in conversation with park pedestrians in Farragut Square. With Advocate in-hand, we cast our fears behind us and plunged into pro-life talks with total strangers. Yes, it was awkward at first, as it may always be to some degree; but with each word spoken and every magazine offered, anxieties subsided and fears gave way to exuberance for our mission.

Being an introvert, I learned that all it takes to conquer apprehension is to harness nervousness as impetus for interaction with complete strangers. As others try this out they will likely discover too that their reticence will fade away by the sheer exhilaration of publicly proclaiming the truth of in utero life.

Claiming the side-walk near this DC abortion-provider as my stomping grounds, I attempted a variety of methods to reach the commuters walking by: The first, which is the easiest, and in my opinion, the most effective, is to simply hand out The Advocate with little more than a smile (I threw in a couple helpful phrases like “Free student magazine!” and “Would you like something to read during your commute?”). The second is walking next to passersby who don’t feel like stopping and then giving them an up-beat sound bite about The Advocate and/or the humanity of the preborn. Thirdly, is a more brash and gutsy approach, but the most fun for me— that being specifically going up to individuals and asking them what they think about abortion and why.

This final method opens people up for a potentially deep discussion about life, without being confrontational. Being the initiator I could direct the conversation, helping them to see the validity of the pro-life side and the unreasonableness of abortion. This approach takes time and greater intellectual effort, but has the best pay-off as an exercise in persuasive debate and as an opportunity to change hearts and minds on a personal level.

Throughout distribution I came across a divergence of responses— some positive, some negative, a few gave no response, a number were interested, while others were indifferent. What stood out to me from all my interactions that day were two longer conversations (as I said, these are usually the best).

One was a congenial debate with a pro-abortion commuter. We talked until we reached an impasse where we were equally adamant in our contrary ideas of human rights. The only regret I have with that exchange was not asking enough questions— asking leading questions about abortion is often much more effective in moving people toward the pro-life side than stating facts or rehashing pro-life aphorisms.

The other interchange was with a young professional named Louis who gladly took The Advocate and proceeded to tell me how inspired he was to know that other pro-lifers were promoting the respect of preborn life!

It’s conversations like these, as different and difficult as they sometimes are, that reaffirm why we are out there as activists in the first place.

To iterate the feelings of my fellow interns and all those who have been advocates for The Advocate before us— even if only one person has a change of heart or hears the pro-life message for the first time, it makes all our efforts, trials and failures more than worth it!

Even if someone is unable to experience the thrill of handing out our periodical person-to-person, everyone can spread the words of life via these alternative distribution tips and options for activism.

Be the voice for the silent scream that people may never hear. — Sign up to be an Advocate distributor today!