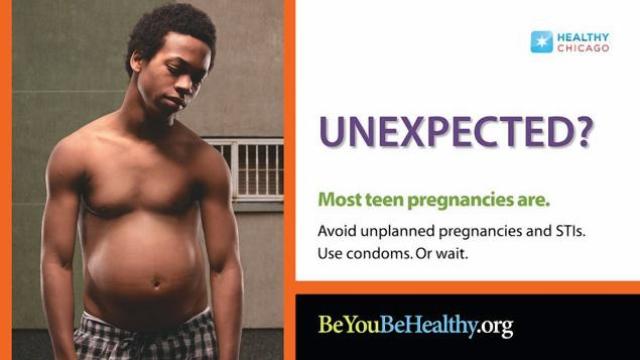 “This is totally working. Or maybe it isn’t.”

If you live in Chicago, or anywhere else with a news channel, it’s likely you’ve seen one of these ads depicting pregnant teenage boys. The Chicago Department of Health followed Milwaukee’s lead by plastering them on billboards and buses across the city in an attempt to lower their teen pregnancy rate, which is reportedly 1.5 times higher than the national average.

Shocking? Yes. Will they grab the attention of hyperactive, immature teenagers? For a second. Are they likely to stop teens from engaging in risky behavior? I don’t think so. Especially since the website these ads direct teens to tells them that it’s actually okay to engage in risky behavior. 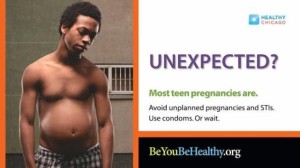 BeYouBeHealthy.org asks teens to proclaim that they are “at least friends” with someone before they have sex with him or her. As in, as long as the person isn’t a stranger, it’s okay, it’s safe, it’s healthy. The trouble with this? First, many teen girls think sex will get a boy to love them. They will likely end up hurt and confused when it doesn’t work out the way they fantasized. Second, sex with all of your friends will increase your chances of contracting sexually transmitted diseases, including HPV, which can cause cancer.

The website directs teens to a different site called The Sex-Ed Loop. This site offers weekly sex tips via text messaging for teens. They let teens know that while it’s illegal to have sex under age 17, no one can stop them. They also have a Pinterest page. This Pinterest page has some inappropriate and tactless images, including lips with the words “So what if I like to suck dick” and tips on how to get your sex drive back. The Pinterest page also features unsuitable images.

BeYouBeHealthy.org and SexEdLoop.com both promote abortion. They let teens now that they can access abortion without anyone informing their parents. Teens who visit this site will be directed to Planned Parenthood…a lot. They are told to go there for free condoms and for birth control and health services. While BeYouBeHealthy.org does list the side-effects of different birth controls, nothing seems to talk about the side-effects and risks of abortion.

SexEdLoop.com offers teens advice from other teens. One such post, from a 20-year-old, is a poem meant to show that single moms are supermoms, but instead it claims that because you’re a single mom you can’t have a career – “just a job.” Another writer, also not a teen, writes about the large variety of birth control she’s been on.

The point of these ads is to get boys to understand that when they get a girl pregnant, they are pregnant, too. They have as much responsibility as the girl does. And though this is true, it is unlikely that teenage boys will do anything more than laugh off these ads. Maybe they’ll think about it. But if they are sent to a website that does little more than tell them where to get free condoms, chances are they’ll still be getting a girl unexpectedly pregnant. Even writer Kate Dries from the liberal web site Jezebel.com says about the ads, “Depending on who you ask, this is totally working. Or maybe it isn’t.”