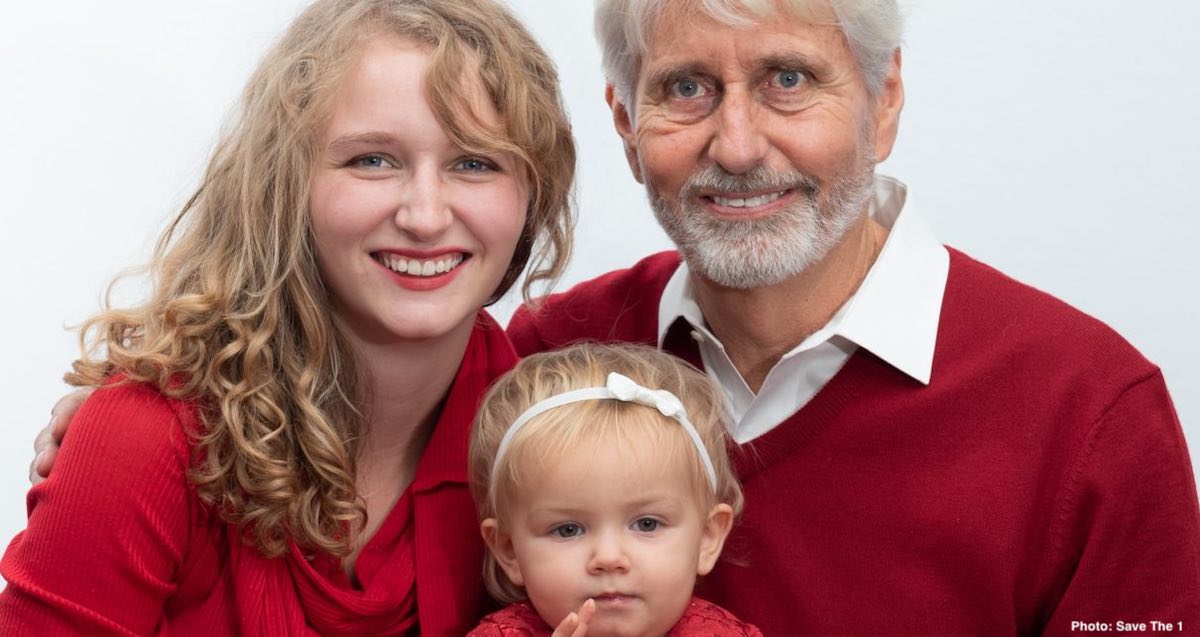 (Save The 1) “Is Kristi pregnant?” That was never a question I expected my pastor and friend to ever ask me over the phone on a Sunday afternoon after we arrived home from church the morning of April 22nd, 2018. I thought, if my 18 year old daughter was pregnant, he would have heard it from me, or from us, right?

It was one more crisis to deal with. My mother had just died of cancer a month earlier. A few months before that, my father fell down some icy steps walking outside a restaurant in Munich, breaking up the right side of his body: shoulder, arm, hip, knee and leg. After he got out of the hospital, I went to Munich to help take care of him for a few months.

Prior to that, we’d had a busy year, having just premiered our first full-length feature film in our local town. We produced, wrote, directed and acted in it —  a true story about our personal testimonies surrendering our lives to the Lord. It was 15 years ago that I learned I had a 3-year-old daughter named Kristi and was struck with awesome joy, even though I knew nothing about her, her mother, or even if she really was my daughter until DNA testing was complete. We spent a year non-stop making that film and had a crew of about 40 people using our house as a full-time production office.

The day following our premiere, we were given notice we would have to move from our rented rural Montana house where I’d lived for 19 years. I loved that house — a 4-acre property by the edge of the woods and near the river, 6 miles out of town. As a single parent, I raised Kristi there most of her life. The property was old and going to be torn down to be commercially redeveloped.

Within 12 hours of completing the move into our new house, I lit a fire in the fireplace, and after I fell asleep, the rafters in the attic caught on fire. Everything was ruined and uninhabitable, but thank God Kristi was away at a dance that evening. The Fire Captain told me the smoke detector saved my life.

Whatever we had left was moved into storage and during the next few months, we moved in and out of several motels, various friends’ houses and eventually a small camp trailer with a door which wouldn’t completely shut.

With all of that going on, it’s no wonder I didn’t know Kristi was pregnant. She was very small and didn’t show for the first 6 ½ months, especially through her winter clothes.

After the call from my pastor, I hung up the phone, waited a moment, took a deep breath, looked up at God saying in my heart, “I need you again please” and walked into Kristi’s room. Immediately, I was emotionally struck and began hugging her telling her how much I love her and how proud I am of her. Even though I didn’t mention anything else, nor did I know any of the details, she instantly realized I knew she was pregnant and we both started crying together. For me, it became tears of joy.

We cried and talked for a long while as I learned she was almost 7 months into her pregnancy. I spoke to my grandchild in the womb, introducing myself as Papa. Kristi hadn’t filled me in yet about having been raped, and was vague in talking much about the father. I do remember having felt something wasn’t right about it, but didn’t want to spoil the moment. I happily knew Kristi would keep her baby, no matter what.

I learned later that she wanted to tell me all along about the pregnancy, but with so much tumult going on in our lives, she didn’t want to just blurt it out. Kristi still had high school graduation ahead and couldn’t seem to find the right time to tell me. She was one of the top students in her school, but the only known girl in that small Christian school ever to graduate pregnant. Still, they supported and loved her through it all.

But most significantly, she was pregnant by rape — a young man who was someone we knew, whose family attended our small church. Of course, no one else knew Kristi had been raped or that she was pregnant. Kristi was afraid to share the details out of fear I would do something bad to this young man and get myself in trouble, and perhaps she was right. As you can imagine, there were in fact bad thoughts going on in my head once I learned what he’d done to my daughter.

In time, my daughter explained how at 17, she had been forced to have sex while locked in this 19-year-old’s car. Kristi had been afraid to go to the police due to being young and under peer pressure, which I understood. This young man supposedly was well-liked and popular, and we were living in a very small mountain town community.

READ: I was raped while on a business trip, but I chose life for my son

I brought the matter up with the pastors of our church. The rapist, both of his parents, two of the pastors, Kristi and myself had a meeting at the church office one evening where the young man willingly admitted what he had done. While I appreciated his truth-telling and hoped I could find it within me to extend forgiveness, there was no true sign of any remorse on his part.

What really surprised me was that one of the pastors (not the one who had called me) recommended that Kristi and her rapist try marriage counseling “just to see if they could become compatible to raise a baby together!” Of course, Kristi said no, and I wholeheartedly agreed, but then we were told that if she wouldn’t follow the recommendations of the church leaders, she was being selfish and would no longer be welcomed in their church.

At first, we were devastated. We had been attending, serving and being served in that church for over 12 years. It was my first church ever. It had been our extended family. We loved everybody and were loved, until that time. We were there every time the doors were open and involved with several of its ministries. I even headed a couple of ministries and had started a prison ministry there.

But now they wanted us to conceal a crime which had been committed — a crime against my daughter which would change her life forever! So, we left.

On July 27th, 2018, I got to witness Adeline Marie Kollar being born early in the morning at 6:31a.m.. I was the first person she opened her eyes to and smiled at having recognized my voice. I fell in love in one second! It was my gift from God having not known about and missed the first three years of Kristi’s life.

The rapist refused to sign Adeline’s birth certificate, so she was thankfully given our last name; however, his parents tried to start a custody case, while I finally convinced Kristi to file for child support. After our attorney listened to Kristi’s story, he strongly recommended she meet with Victim’s Services. The nice young counselor there convinced Kristi that she really should report the crime to the police — even though it had been 10 months — just so the police would have the young man on their radar, against other possible assaults.

At the police station, I too was interviewed by a young female detective who seemed like she wanted to charge the young man after learning about the story, but that would now depend upon the State. Meanwhile, the detective went to interview the pastors of our former church, the young man, and his parents. She later contacted us and said everyone denied that the young man had made that confession back at the church office meeting….

Continue reading story in full at Save The 1.

BIO: Robert Kollar is a single father, grandfather, post-abortive, and pro-life speaker / blogger for Save The 1. He is also a filmmaker, writer, prison minister, and fatherhood speaker. For more info on his film projects, go to mwmcornerstone.com

Editor’s Note: This article was published at Save The 1 and is reprinted in part here with permission.