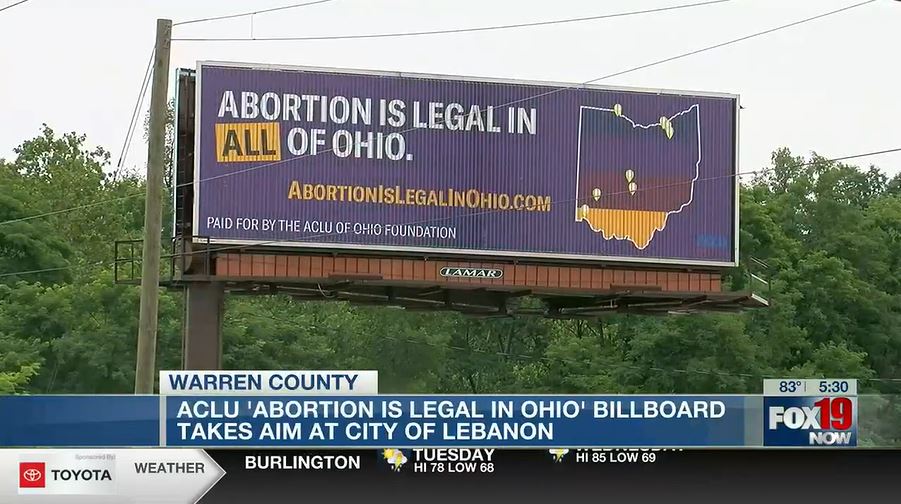 Following a decision by the city of Lebanon, Ohio, to become a Sanctuary City for the Unborn, the pro-abortion ACLU of Ohio purchased a billboard to remind Ohioans that abortion is still legal in the state.

According to Fox19, the billboard is located just outside the city limits of Lebanon, where in May, the city council voted to ban abortion within city limits. The enforceable ordinance, which was approved unanimously, makes committing or participating in abortion a misdemeanor offense punishable by a fine of up to $1,000. A medical professional who carries out an abortion could also spend six months in jail. There is no penalty for a woman who undergoes an abortion. The pro-abortion billboard was erected in response to that ordinance.

The billboard states, “Abortion is legal in all of Ohio,” and lists the website AbortionIsLegalInOhio.com. It features a map of Ohio pinpointing the locations of the state’s abortion businesses.

“We put up the billboard in reaction to an ordinance passed by the city of Lebanon,” said Freda Levenson, Legal Director for ACLU of Ohio. “The ordinance is meant to stigmatize abortion and to interfere with the availability of critical health care.”

However, there was no abortion facility in Lebanon prior to the ordinance, and as pointed out by Council Member Adam Matthews, this means that the ordinance is not currently restricting abortion access in the city, since there was no facility located there to begin with.

For the ACLU to reference abortion as “critical health care” reveals the fact that the organization is in no way impartial on the issue of abortion. Abortion is the direct, intentional, and violent killing of a preborn child, and therefore is not health care. If a pregnancy complication puts a woman’s health or life at risk, the preborn child can be delivered prematurely to save the woman. An abortion would only lengthen the process with the sole intention of ensuring that the baby is dead prior to birth.

Lebanon was the 29th U.S. city to pass an ordinance to ban abortion. More have followed suit, including Sterling City, Texas, which became the 32nd Sanctuary City for the Unborn in June. South Lebanon is also planning to enact the same ordinance as Lebanon when it becomes a city later this month, according to Fox19.

“I’m glad that we passed this ordinance,” said Matthews.” I’m happy that we sponsored it. It’s been seven weeks and we’ve had no legal action against it because we did the work. We wrote it in a way that fits with the abortion jurisprudence and we expect it to withstand any legal challenge if there ever is one.”