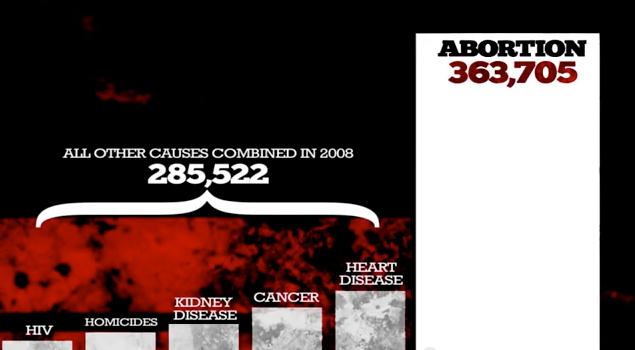 No child is unwanted; every child is wanted by someone. And yet…

Too Many Aborted, an initiative of the Radiance Foundation, released a short video earlier this year to expose the number-one cause of death in the black community in America. What is that cause of death? Abortion.

According to Too Many Aborted:

Abortion is a human tragedy no matter the race, but nowhere in America is it more prevalent than in the Black community, where nearly 40% of all pregnancies end in induced abortion.

The following diagram is a still from the video that shows how abortion ranks with other causes of death in the black community – there is no other cause that comes even close to it:

Ryan Bomberger, co-founder of the Radiance Foundation, could have been part of that 40% statistic. He was conceived in rape, but his mother chose to give birth and place him for adoption. Bomberger believes that no child is unwanted, but that all children are wanted by someone: