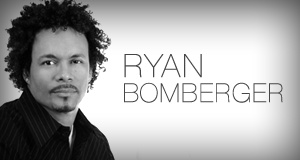 Ryan Bomberger is a gentle but imposing presence. From his crazy-curly hair to his vivacious personality, he knows how to capture the hearts and minds of America. This personal dynamism has fueled the success of his family’s grassroots organization, the Radiance Foundation, which has taken pro-life America by storm since its foundation in 2009. Referring to himself as a “creative agitator,” Bomberger stirs up and challenges popular conceptions about life issues using media that is as colorful – and real – as he is.

I had the good fortune of hearing Ryan’s story and testimony at a recent dinner fundraiser for the Houston Coalition for Life, where he was the keynote speaker. Ryan is one of thirteen children, ten of whom were adopted. They all came from different ethnic backgrounds, and Ryan himself was conceived in rape. Black, adopted, conceived in rape: Ryan truly survived against odds that are insurmountable to many pre-born children with a similar profile today. And he is all too aware of this fact. He credits the courage of his biological mother for carrying him to term, and his affection for his adoptive family was tangible in the room.

Before they were married, Ryan’s wife Bethany found herself in an unexpected “crisis” pregnancy, which she carried to term. The couple is now raising that blessing, Radiance, together along with their other beautiful children. It was Radiance who inspired the name of the “Radiance Foundation.”

One of Ryan’s most notable achievements is the Foundation’s Too Many Aborted campaign, which sheds light on the reality that a disproportionate number of black babies are aborted in America. Ryan pointed out that in New York City, over 60% of the black population is aborted today.

Ryan never seems to run out of creative ideas. Peruse his website for one minute, and your mind will be blown. You’ll be inspired, cheered, informed – truly, the “Illuminate, Educate, Motivate” motto of the Radiance Foundation comes to life:

Through creative ad campaigns, powerful multi-media presentations, and compassionate community outreach, we illuminate the intrinsic value each person possesses. We educate audiences about pressing societal issues and how they impact the understanding of individual Purpose. We motivate people to positively affect their families, their schools and their communities.