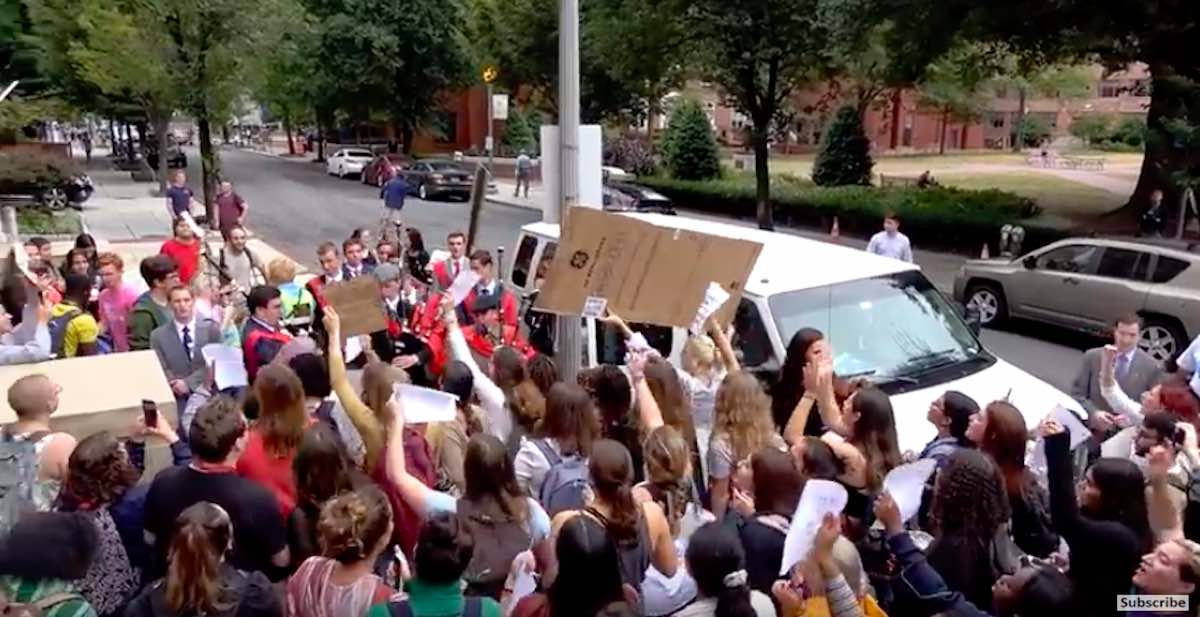 Wearing formal suits and holding a banner that read, “Pray and act to end the sin of abortion,” as well as handing out flyers stating, “Abortion offends God,” the group certainly had unusual methods for entering dialogue on a 21st-century college campus. While their approach may seem archaic, the men representing TFP Student Action appeared to be respectful of the people they encountered, inviting passing students into conversation.

The response they received on campus was incredibly hostile. One student is seen marching up to the group shouting, “You have no right to be here! Shut the f*** up! Stop it!” Despite consistently engaging passersby with questions of what defines human life and how the preborn baby’s life can be protected while also protecting the life of the mother, they were met with profanity.

Many of the pro-abortion students who engaged with the TFP Student Action Group offered no substantive response and simply labeled the pro-lifers “anti-woman.” Gradually, the protest became more contentious with a group organizing an impromptu counter-protest chanting and dancing while shouting “F*** you!” and “My body, my choice.” Campus police and later city police intervened to separate the two groups.

Though it is difficult to confirm from the video, several members of the TFP Student Action Group claim that they were physically assaulted, which is not hard to imagine. One man had a soda thrown at him, another said his injured wrist was hit, and another said he was kicked. The video does clearly show a woman spitting on one of the pro-life demonstrators, as other videos from TFP Student Action also show.

The hostility and violence encountered by TFP Student Action is unfortunately not an isolated response to TFP’s seemingly unusual methods of outreach, however. Regardless of the method of reaching others with the pro-life message, there is growing trend of violence against pro-lifers on college campuses and in other public places.