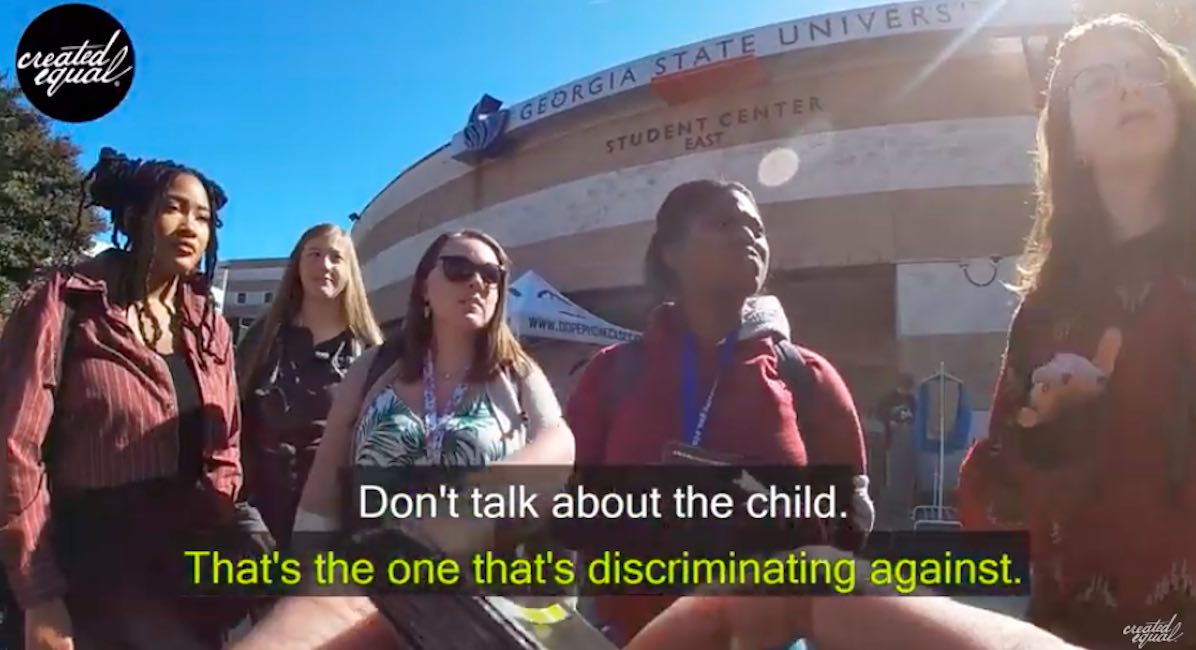 Pro-life activist group Created Equal has released a video showing just how powerful its campus ministry outreach can be — and the flawed logic pro-abortion activists often use to justify their actions.

The interaction — this one taking place at Georgia State University — was part of the group’s campus outreach program. As part of the program, trained staff and volunteers use photos of abortion victims to initiate a conversation about abortion. It begins positively when a young woman approaches the Created Equal member and asks him to explain his position on abortion.

READ: Why are abortion supporters bothered by images of aborted ‘clumps of cells’?

“Sure, yeah,” the Created Equal representative responds to the first student. “We believe that it’s always wrong to intentionally kill an innocent human being…. So we would just say that all human beings are equal and worthy of human rights. We think that at the moment you begin your existence, you deserve to be protected just like anyone else.”

“Unless you’re a woman who’s pregnant,” interjects another young woman standing nearby. The interaction then takes an unpleasant turn.

“No, we would say that a woman should be protected but we shouldn’t murder her preborn little girl in the womb,” responds the campus outreach member. “I think that women don’t earn their rights based on their age and I think that she has dignity and value and rights regardless of whether she’s born or not.”

“I’m saying let’s not kill either of them,” he replies.

The woman continues on her tirade, saying “Let’s make her go through all that trauma just for her child to be born.” She proceeds angrily, prompting the speaker to say, “Well, we’re not having a calm argument right here.”

“Oh we’re not having a calm argument but you’re gonna post little pictures of babies getting murdered like that?

“You agree that they’re babies and you agree that it’s murder, so why are you advocating for murdering babies?” asks the speaker.

“Why is that in question? It’s a child!” the woman responds in a stunning admission. Her recognition that abortion is in fact the murder of a child is something many abortion advocates refuse to admit.

Despite acknowledging that abortion is murder, the woman refuses to listen to reason.  “Get educated,” she says angrily, walking away.

Perhaps the most inspiring part of this whole on-camera interaction is the young woman who initiated the conversation. After being interrupted, she calmly stands by and watches how things unfold, listening to every word said. Before walking away, she and her friend introduce themselves and thank the Created Equal member for his time. The calm witness offered by the well-spoken pro-lifer likely had a great impact on these young women.