The goal of the abortion industry, despite a once-espoused desire to make abortion “safe, legal, and rare,” has always been to make abortion accessible, available, and “normal” — and therefore, common. The U.S. Food and Drug Administration (FDA) under the Biden-Harris Administration has largely aided in this goal by loosening the safety protocols on the abortion pill known as REMS, which now allows the abortion pill to be dispensed by mail under a “no-test” protocol — meaning without ultrasound or any sort of medical exams or testing beforehand.

As a result, online abortion pill dispensaries are popping up with increasing speed. One new abortion pill network that has emerged to assist online dispensaries to hang up their “virtual shingle” and “normalize abortion care” is the MYA Network. It describes itself as an “activist group of clinicians who are working to make abortion part of routine medical care” with the overall goal of “normaliz[ing] abortion care, medically and culturally.” The group also seeks to “create telemedicine-based abortion care in all states that allow it” and to “train and support clinicians to offer medical abortion.”

“The more ‘normal’ clinicians provide ‘normal’ medical care to ‘normal’ patients, and tell our ‘normal’ stories, the harder it will be to criminalize this common, safe and essential medical service,” the group states on its “about us” page, adding, “because abortion is healthcare, NOT politics.”

MYA Network was launched in 2020 during the COVID-19 pandemic as a “project of The Community Health Promotion Project (CHPP)” whose principle officer Joan Fleischman created the New York abortion facility Early Options. Fleischman admits in an online video that she wanted to use the COVID-19 pandemic as an opportunity to “take advantage of this moment and make the abortion pill more accessible.”

In the video below, Fleischman refers to herself as a “family doctor” who has “provided abortion care for over 25 years.” She points to changes put in place by the FDA to weaken important safety requirements on the abortion pill and allow mail order abortions.

“With TelAbortion many of the barriers to main stream medical care were suddenly removed. Patients and clinicians could have remote relationships with no way to target them. One clinician could see patients in an entire state…We seized the opportunity and launched MYA Network to realize our long-term vision of normalized abortion care,” Fleischman says.

“MYA Network got started after Dr. Joan Fleischman from New York City reached out at the start of the pandemic with a call to action to primary care providers. She, like many others, believed that the pandemic and the no-test protocol provided an opportunity for those of us who’ve wanted to integrate early abortion services into primary care to do it,” MYA Network co-founder Michele Gomez, MD, told Ms. Magazine. “There was a great response: Around 60 clinicians wanted to help make it happen. Three of us—myself, Joan and Dr. Erika Bliss in Seattle—were able to get started relatively quickly and decided to set up an organization to help other clinicians do the same.”

“It was really heartening to see so many people in the world of abortion care, each with their own expertise, working together to help each other expand access wherever and however they could. It was a sanity-saving contrast to so many other terrible things that were happening at the time,” Gomez told Ms. Magazine.

Gomez, who once trained residents to provide abortions through Bixby’s TEACH program, also works for Family Care Associates in Burlingame, California. She recently described how she prescribes abortion pills via telemedicine, and may only spend as little as 10 minutes with a client. 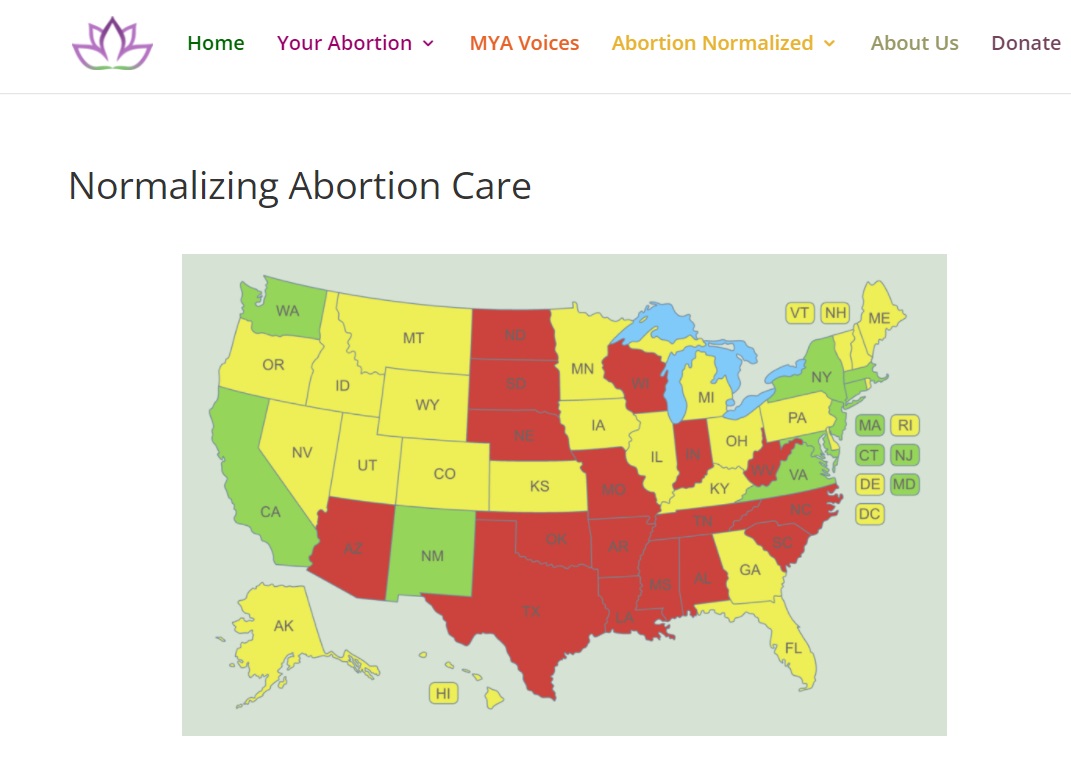 “The MYA Network website lists providers by state. We currently have clinicians in seven different states, including an academic institution that has integrated early abortion services into their primary care clinics on campus,” Gomez stated.

Gomez is on MYA’s advisory board as well as Dr. Erika Bliss who commits abortions at Equinox Primary Care in Washington State. The advisory group also includes Christie Pitney, CNM, an advanced practice midwife with Forward Midwifery, which sells abortion pills online in California, Colorado, Oregon, and Massachusetts. According to Ms. Magazine, “Christie works with Plan C, is an Aid Access provider, volunteers for the Miscarriage & Abortion Hotline and is part of the MYA Network of telehealth abortion providers.”

While the abortion industry seeks to normalize abortion, recent polling has revealed that de-medicalizing abortion by shipping the deadly pills through the mail without in-person exams or testing is not popular among younger (mostly Democrat) voters who are concerned about safety. Separate polling also showed that 63% of Americans oppose the FDA’s modifications to allow abortion pills by mail.