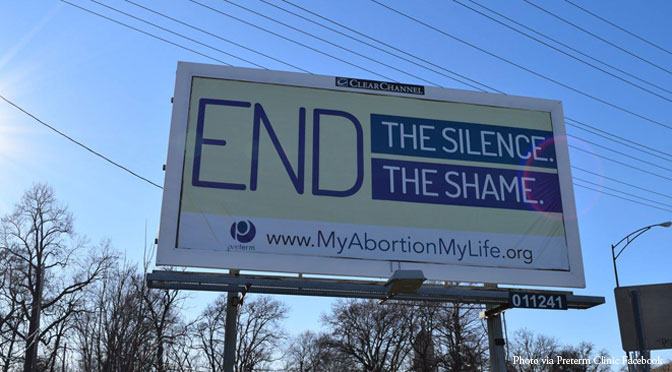 Preterm abortion facility in Cleveland, Ohio, has a less than stellar history in regards to women’s health, including a botched abortion in 2014 that led to the death of 22-year-old Lakisha Wilson. Wilson died a few days after the abortion due to complications arising from the procedure.

But now Preterm is back in the news for a very different reason. The organization has launched several billboards and bus kiosk ads encouraging women to brag about their abortions.

The ads read, “End the silence. End the shame,” and refer readers to a website called MyAbortionMyLife.org which features abortion stories portrayed in a positive light. The ads are intended to run for at least the next six months.

Nancy Starner, Preterm’s director of development and communications, hopes the ads will help people ignore the clear moral issues involved in the abortion debate, and see it as a complex issue.

“We wanted to move away from political black-and-white abstract issue,” Starner said, “and look at it as nuanced, rich, complex experience that women and their families go through.”