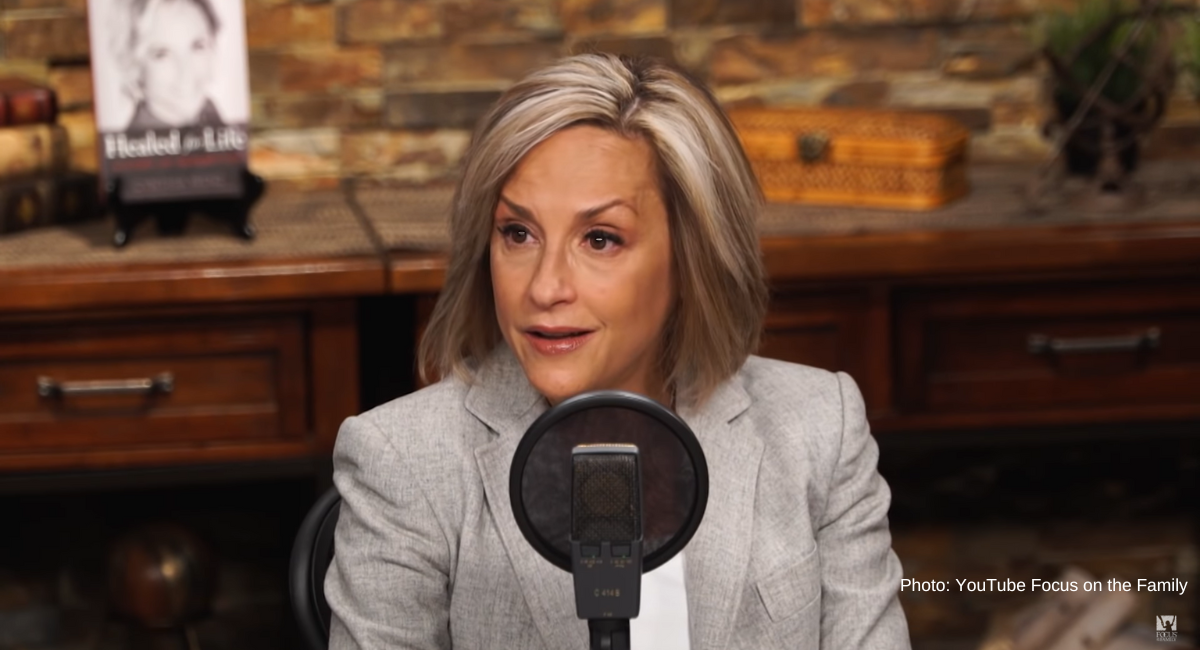 Over the course of two episodes of Focus on the Family Broadcast, pro-life advocate Cynthia Wenz shared her multiple experiences with abortion beginning when she was just 15 years old, including the abortion trauma she overcame and the healing she received.

The search for love leads to promiscuity

Wenz shared that her grandmother, who was a main source of comfort and faith for Wenz, lived with her family growing up. However, when Wenz was 12, her grandmother moved out and her parents’ marriage began to struggle. Both events sent Wenz into a downward spiral.

“You’re a minor. You’re not wired to process what’s going on,” Wenz told Jim Daly, Focus on the Family President, and John Fuller, co-host of the show, about her parents’ split. “And so you grasp at things. And so at 14 actually, looking for love in all the wrong places, I began acting out with promiscuity.” Wenz began using alcohol and visiting the homes of older men in the neighborhood who provided her and her friend with drugs and alcohol.

Wenz felt as if she was expected to have sex with these men, so she did, and she became pregnant at just 15 years old. Her mother had noticed that Wenz hadn’t had her period, so when Wenz told her that she was pregnant, it didn’t come as a shock. “I looked at her and she had the solution. And this is where […] you can’t look back and blame but you can look back and go, ‘She was doing what she thought would help me.’ There’s a law in the land that said it was okay.”

Though Wenz wanted to keep her baby and knew abortion meant killing, her mother took her for a secret abortion so that Wenz’s father wouldn’t find out. Once it was over, they went to Denny’s for breakfast, and never spoke of the abortion again.

Still trying to experience love, Wenz continued to be promiscuous, having an affair with her coach and getting involved with multiple men. As a 19-year-old freshman in college, she found herself pregnant again. “Sex is the norm. The habits have been formed. Sex is now the habit of what you do with men because you’ve already been there,” she said.

Wenz realized she was pregnant while home on break. Her boyfriend sent her money to pay for an abortion, and they didn’t see each other again. She called the experience “tragic” but at the time, she justified the abortion by telling herself that the drugs she was taking had probably harmed the baby and she likely would have miscarried.

Wenz continued with promiscuity. Ten years later, she found herself in two relationships at once, one with a verbally abusive boyfriend, and another with her married employer. She learned she was pregnant for the third time during a doctor’s appointment. Wenz said she had a breakdown at the doctor’s office, telling the doctor that she didn’t know who the father was, and crying that her boyfriend would kill her if he found out. The doctor told her that since she was experiencing bleeding and her HCG levels were dropping, she was likely miscarrying. The doctor completed a D&C abortion, then held up a jar at the end and said, “I think we got everything.”

“I had to choose life”

But two weeks later, Wenz was still pregnant. “This is where the Holy Spirit was with me in my deepest, darkest moment,” she said. “I said, ‘What? What does this mean?’ She looked at me and she said, ‘We probably didn’t get everything.’ What does that even mean? And my arm went up and I said, ‘Can I see what’s inside of me?’ Oddest request because you don’t know what you’re asking at the time.”

The doctor sent Wenz to the hospital for an ultrasound and the baby was moving so quickly that the tech couldn’t get a still image. She looked at the screen and she could see her tiny baby “moving and wiggling” and then she saw the deflated sac on the other side. Wenz had been pregnant with twins, and the abortionist had killed one of them.

“At that point,” Wenz said, “I had to choose life”

But choosing life wouldn’t prove to be easy. Her son was born prematurely at 31 weeks, barely clinging to life.

“He comes prematurely. And he comes at 31 weeks and he is dead upon arrival. the umbilical cord slips out of me at the house,” she explained. “What are you telling yourself? Well, ‘You did this. It’s your fault. You’re to blame.'”

Knowing they were going to lose the baby because his heart rate was dropping, the doctor told the paramedics to prepare Wenz for an emergency C-section as they drove the 19 minutes to the hospital. Upon arrival, the doctor ran out of the ambulance and began the C-section as they wheeled Wenz into the ER. Her son Roman, named for the Bible verse Romans 8:28, had to be resuscitated at birth. She wouldn’t see him until the following day.

But when that moment finally came, the guilt and shame Wenz felt over her abortions, and the fact that Roman had survived the attempt on his life took over. She felt so unworthy to hold her son, that at first she refused to do so. Roman stayed in the hospital for 25 days before going home. Though she still struggled with shame and guilt, Roman’s survival made her believe that God is real. “I was so far gone that He had to redeem me by having me recognize life and then choose it,” she explained.

A few years later while still dealing with her guilt and trauma, Wenz married her husband Chris, whom she calls her “Rock Solid Man of God.” They welcomed two sons together, but their marriage had its struggles, many of them due to Wenz’s post-abortion trauma. Wenz explained that after eight years of marriage, Chris suggested she begin serving in a pregnancy resource center to help her heal from her past. It was at that pregnancy center that she received her first session of post-abortion counseling. A few weeks into the program, Wenz began to reconcile the first abortion and continued through two more sessions of counseling before she finally saw herself as a woman of God who is loved.

Wenz eventually became the CEO of that center, taking it from one location to three and turning it into a multimillion-dollar nonprofit organization. In 2013, she was named one of the Top 30 Most Influential Women in Houston. As her abortion and redemption story spread, Wenz realized she had to tell Roman that he had survived an abortion. He was just eight years old at the time, but he overheard his mother counseling a woman with whom she shared her own personal story. Roman asked her if he had a twin and where his twin was. He then asked her if she wanted him. And she said, “Roman, you’re the best gift God has ever given me.” To which he answered a simple, “Okay.”

Together, mother and son eventually began working as pro-life advocates, sharing their miraculous story at pro-life events and testifying in support of pro-life bills. Roman also contributed to her book, “Healed for Life.” He is now married with three children of his own and Wenz works to “raise the post-abortive voice” and share the trauma that abortion can cause from her own first-hand experiences.