As the Biden-Harris Administration took office, Planned Parenthood came back into favor with the White House. Last week, as Live Action News reported, a House Appropriations bill proposed an increase of $131 million to the Teen Pregnancy Prevention (TPP) program, along with a complete removal of the FY 2021 funding allocation of $35 million for Sexual Risk Avoidance (SRA) education funding. What this means for pro-lifers, in black and white, is that Planned Parenthood is gaining unfettered access to America’s school classrooms, with government-assisted blank checks — and none of that includes abstinence-only education.

Do all comprehensive sex ed roads lead back to Planned Parenthood?

The TPP Program is the government-based sexual education program housed in the Office of Population Affairs (OPA). It dubs itself a “national, evidence-based program that funds diverse organizations working to prevent teen pregnancy across the United States.” While the OPA makes TPP sound as if it is “diverse” in its sex education providers, this is misleading. These are just a few openly-listed Planned Parenthood grantees. (Note that in the first image, Planned Parenthood of the Heartland lists multiple sex ed curricula which they are implementing with the listed grant.) 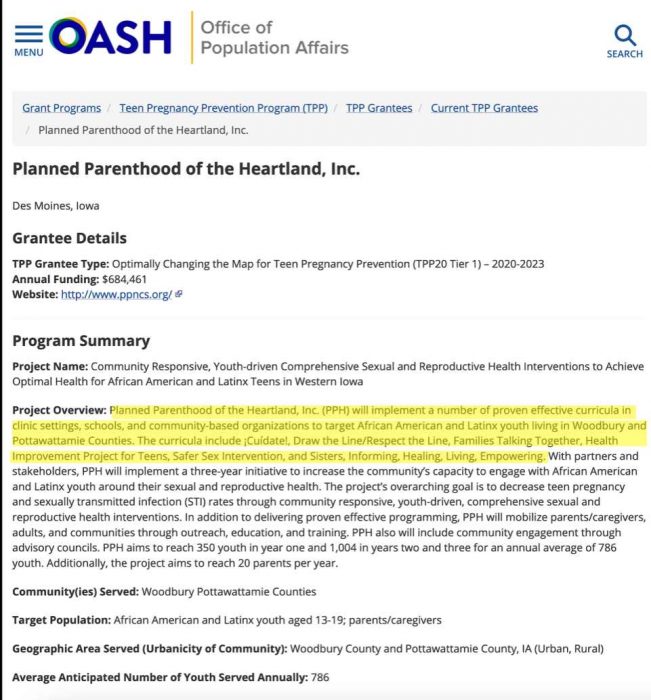 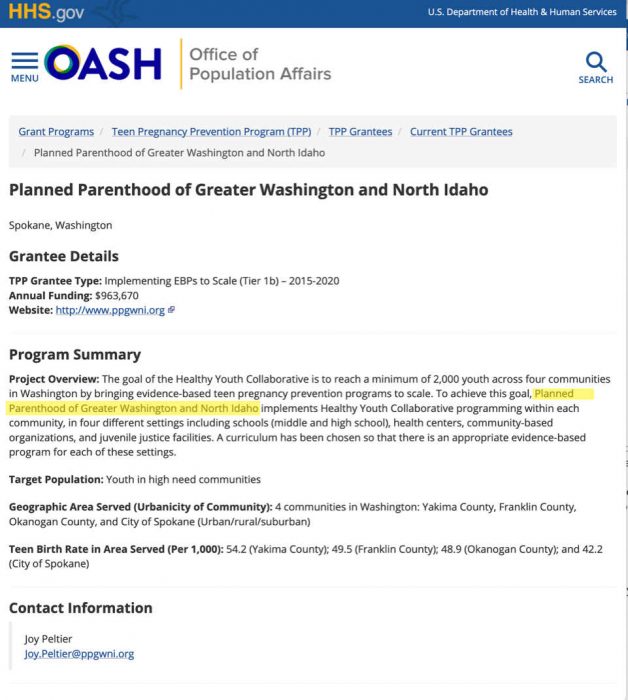 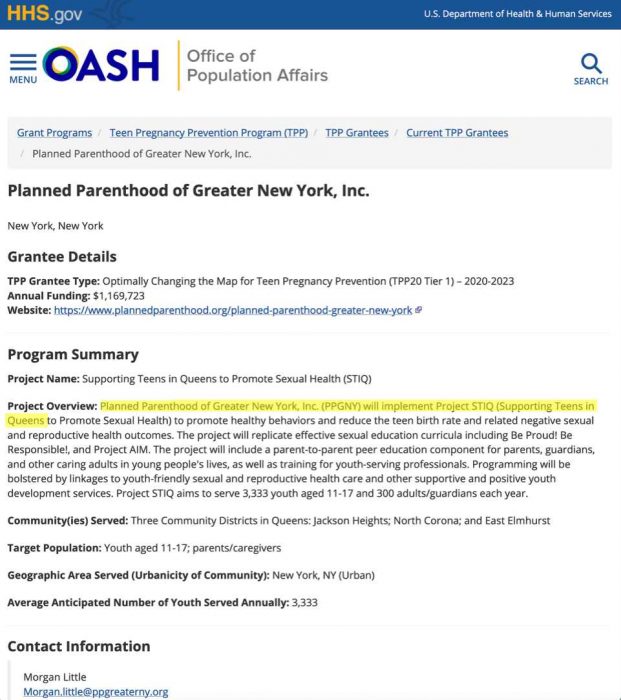 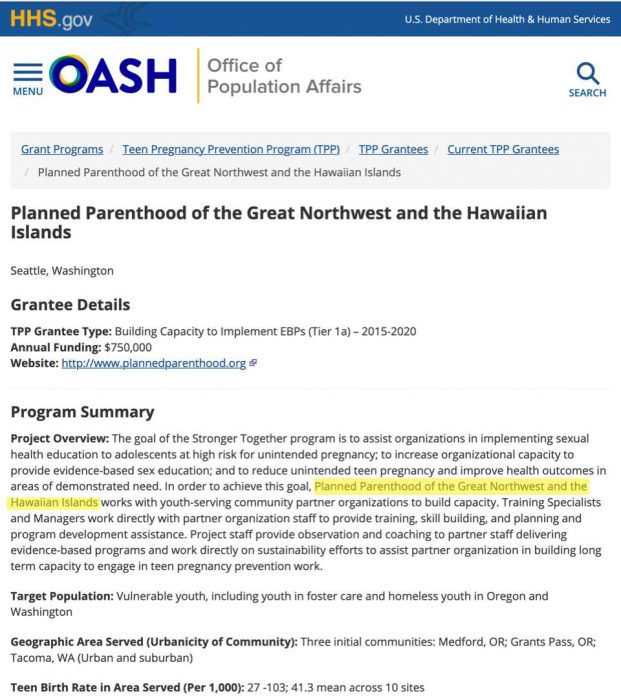 There are many others on the current grantee lists, however, which are also associated with Planned Parenthood, even though they do not appear to be. One example is this one from Thrive OKC. 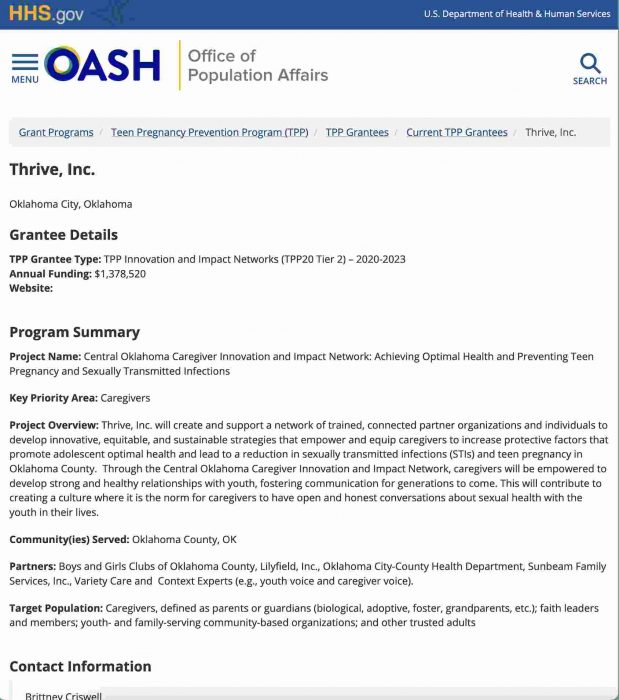 This Oklahoma City OPA grantee may not be Planned Parenthood specific; however, when one examines Thrive’s list of local clinics they recommend, Planned Parenthood facilities are listed. In fact, Thrive lists a PDF guide on its site that tells teens which facilities provide which services, and even discusses how teens under 18 might skirt parental consent laws, and lists which clinics are “teen friendly.” While Thrive carefully avoids the word abortion, it discusses “emergency contraception,” which can function as an abortifacient. At the end of its guide, it declares to teens in bold print: “Be proud that you went to the clinic!” This program is also funded with federal taxpayer dollars, even though, unlike some of the examples above, it is not explicitly a Planned Parenthood grantee.

Thrive is one of a number of organizations which receives federal monies to provide sexual education to minors, yet could end up leading them to abortion guidance, to Planned Parenthood, or both.

Sex education that is connected to Planned Parenthood may not be what parents think it is.

READ: Former Planned Parenthood sex educator: Moms and dads ‘give the best guidance’ to their kids

Former Planned Parenthood sex educator Monica Cline wrote in a piece for the Washington Examiner that when she showed up to training for the job, she believed she was there to encourage young people not to have sex, but found the opposite. In fact, she said she was told that she was effectively judging students by not assuming  that “everyone was doing it.” She was led to collaborate with a group of young people who were asked to label sexual activities and body parts with slang terms.

“You can imagine how crass this becomes,” she wrote, adding that eventually even more introverted students warmed up to the activity and there was “a collage of illicit sexual terms and activities written all over the board” — which led the students to “begin to believe that this is part of healthy sex education.”

Cline noted, however, that “The terms are dehumanizing, and the activity serves to restructure their thoughts about their bodies, others’ bodies, and the act of sex. Sexual intimacy is redefined from being special, for marriage or for having babies, to being crass, seeking pleasure over meaningful relationships, accepting STDs as a way of life, and terminating the lives of babies so we can worship our sexual rights without hindrance.”

Cline notes that Planned Parenthood’s sex education is designed to omit parents from the equation. “That is why they say, ‘Parents are a barrier to service,’” she claimed, adding, “Organizations like Planned Parenthood do not aspire for more in our children’s lives. Their answer to happiness and empowerment is to have sex, use a condom, get tested, treated, and have an abortion.”

Cline’s piece furthers the idea that Live Action exposed in its investigative series on Planned Parenthood’s sex education, where it was revealed that “[t]he motto at Planned Parenthood seems to be sex with no strings attached. Teens are told that they can have sex wherever, whenever, and with whomever — and anything goes, as long as it’s consensual and contracepted.”

Planned Parenthood itself announces that it is the largest provider of sex education in the United States, with a reach of 1.5 million people, with sex education beginning in elementary school.

According to Planned Parenthood, any sex education that promotes avoiding sex before marriage is “shaming” and doesn’t work at all. In fact, in its own words and in bold print, what the abortion giant actually says is this:

We have to fight against abstinence-only-until-marriage/SRA [sexual risk avoidance] programs and advocate for sex education laws and funding that support the full range of sex education topics that young people need.

Despite this, the flow of funding continues. Citing the 2010 inception of the TPP, Planned Parenthood notes that former President Barack Obama began this ever-increasing funding stream, writing on its website, “These were created to provide funding and support for sex education programs that are backed by science, proven to increase safer sex and help young people prevent unintended pregnancy.”

Yet, despite the continued increases in funding, a recent analysis indicates that Planned Parenthood’s sex ed has been less than successful, to say the least.