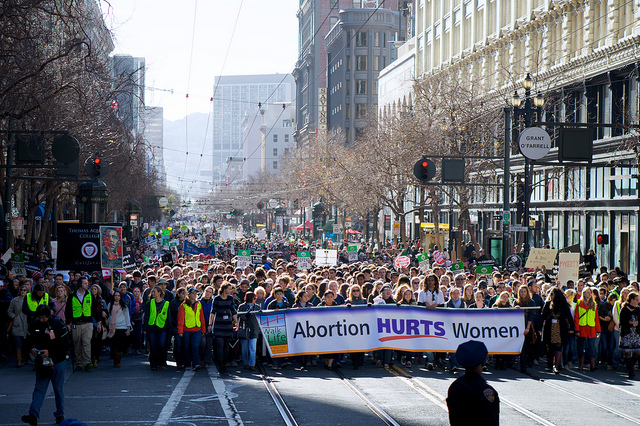 January 22 is a date that pro-lifers will always remember. It’s the day that Roe v. Wade was decided, and abortion became legal in all 50 states. And so, many pro-lifers participate in walks, demonstrations, and prayer vigils in January each year to protest the court decision and to remember the millions upon millions of lives lost ever since.

One group, Walk for Life West Coast, placed pro-life banners along Market Street in San Francisco. The banners had one phrase on them: “Abortion hurts women.” And, predictably, this has abortion advocates in San Francisco outraged.

Yes, for the second time in two years, the city’s main thoroughfare has become a hotbed of anger and finger-pointing over abortion-related banners.

… The Silver Ribbon Campaign to Trust Women wrote a letter to Mayor Ed Lee this week saying the banners contain “a false and hateful statement” and demanded they be removed.

To his credit, Mayor Ed Lee is refusing to take the banners down, even though he is pro-abortion.

Walk for Life West Coast invited the people upset over the banners to come to there Silent No More Awareness rally, saying:

Just listen to them and decide for yourself if what you are hearing is “hate speech.”

We welcome everyone to the 10th Annual Walk for Life West Coast on January 25, 2014!

It’s important to keep in mind that none of this is out of character for pro-aborts, and especially not in San Francisco, where billboards of a father holding his son were vandalized, and the SF Weekly applauded the vandalism as a “beautification” and as the “work of artists.” Abortion advocates have been similarly outraged by other pro-life billboards.