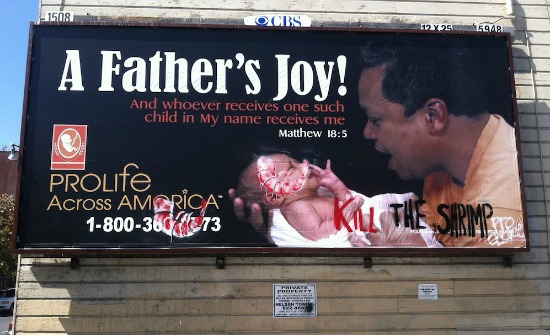 Pro-Life Across America has displayed pro-life billboards in 6,500 cities across the country. The following billboard, which does not even say the word “abortion,” was displayed in San Francisco’s Bernal Heights neighborhood: 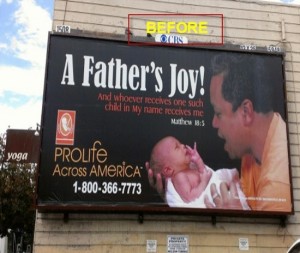 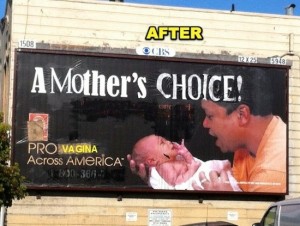 The original billboard was put back up, but it was vandalized again with an even nastier message: 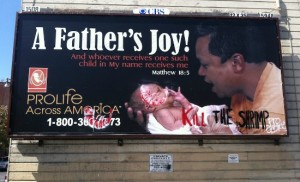 After that, Pro-Life Across America had the billboard removed, but the vandals weren’t finished. They had one last message to leave. 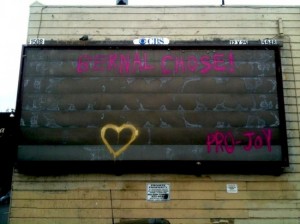 Because, you know, babies are the complete antithesis of anything joyful. They will ruin your life.

The president of Pro-Life Across America, Mary Ann Kuharski, told LifeSiteNews that vandalism like this rarely happens.

However, she noted, such attacks ironically tend to benefit the pro-life message. “We’ve rarely had things defaced, because oftentimes those who think that they’re hurting our cause find out that they’re drawing more attention to what we’re doing, and we’ve actually saved babies lives when people saw only a fraction of what was on there. It draws attention, in other words, to what we’re all about.”

It’s easy to see that a billboard spray-painted with “kill the shrimp” probably isn’t too helpful to the pro-abortion movement, especially since they like to avoid the sticky truth of the whole “murder” part of abortion.

Weekly newspaper SF Weekly, published by Village Voice Media, ran several stories on the subject. What did they think of the criminal vandalization?

Well, there was this:

Last week, liberals across San Francisco were thrilled by the work of some left-leaning artists who took it upon themselves to revise a pro-choice billboard spotted along Cortland Avenue. It was like really cheap neighborhood beautification!

As first spotted by Bernalwood, some “hackers” saw this political billboard on Cortland Avenue and decided it was in need of a major redesign.

… Just think of it as free beautification.

So the conservatives behind that pro-life billboard finally took a hint. And that’s how politics in San Francisco works.

Not only was this vandalism a criminal act, it was also tasteless and despicable. It is one thing to be pro-abortion; it is quite another to react to seeing a black father happy with his son by actually encouraging black families to kill their children instead. And pro-aborts wonder why pro-lifers see inherent racism in the abortion industry.

And the SF Weekly reacted by calling it a “neighborhood beautification.” Disgusting.