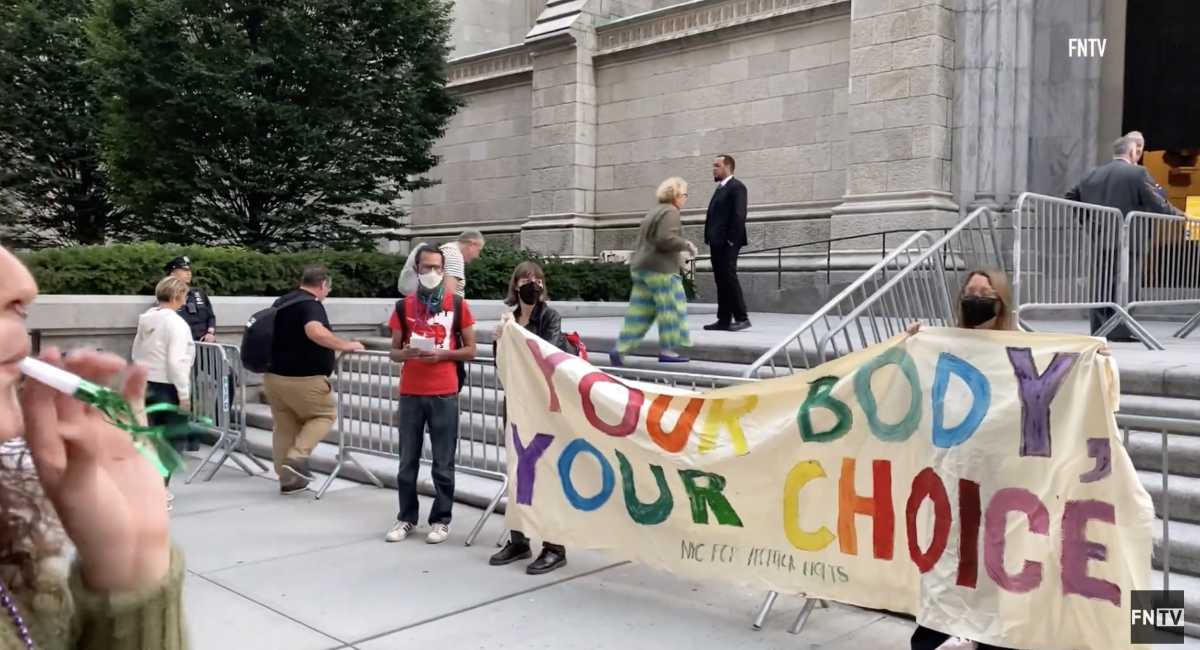 A group of pro-abortion activists harassed religious sisters and pro-lifers outside of St. Patrick’s Cathedral in New York City on Monday evening while taking part in an “abortion carnival” counter-protest to the scheduled 40 Days for Life meeting.

The protestors were instructed to wear bright colors and be ready to make noise in order to grab the most attention. They shouted profanities, and one pro-abortion participant even harassed two Catholic Sisters of Life who appeared to be exiting the Cathedral, telling them, “F*** you, Sisters of Life,” while another said, “F*** you, you nun b*tches.” The harasser then added, “Maybe if you got some d*** you wouldn’t be so uptight.”

Warning: Profane language in the video below.

In addition, shouts of, “You should have been aborted if you go inside [the church],” and “Your mother should have aborted you!” could be heard even as young children walked into the church.

At one point the abortion advocates chanted, “Thank God for abortion” as well as “Abortion is a right,” “Save abortion, God,” and “F*** the court and legislators. We are not your incubators.” They also chanted, “Pray, you’ll need it. Your laws will be defeated.” Protesters held signs saying they would aid and abet abortion that featured images of the abortion pill, implying they would help send the dangerous abortion pill to women around the country without any knowledge of their pregnancy or health concerns.

The group of protestors continued to attempt to disrupt the pro-life meeting by banging, shouting, and blowing horns. They also blocked traffic and gave the middle finger to NYPD police officers.

Despite all of this, one pro-abortion woman dressed as a Catholic bishop claimed the pro-abortion protestors are a “loving” group. “The Catholic Church is planning 40 Days of Anti-Choice and they’re organizing tonight under a Mass scenario and we’re very loving, we believe in anyone’s right to choose the religion that they follow,” she said. “Unfortunately, it’s crept into politics with a national ban on the roster right now, we feel like it’s time to raise awareness and makes sure that a woman’s right to choose stays between her, her loved ones, and her health care provider. We’re here tonight for free and fair access to abortion on demand for women in America and we stand in solidarity with our sisters in Iran.”

She added that her group wants to “spread the light.”

In truth, the “national ban” that the woman referred to is a federal bill that would protect preborn children from abortion after the first 15 weeks of pregnancy, recently introduced by Senator Lindsey Graham (R-S.C.). Polls have shown that a majority of American support restricting abortion after 15 weeks.

As recent protests have erupted in Iran over 22-year-old Masha Amini — who was said to have been tortured and killed by the “morality police” due to an alleged dress code violation (a loose head covering) — American women enjoy the freedom that comes with living in the United States. However, that freedom should not include the ‘right’ to kill innocent human beings, no matter their size, location, level of development, or degree of dependency.