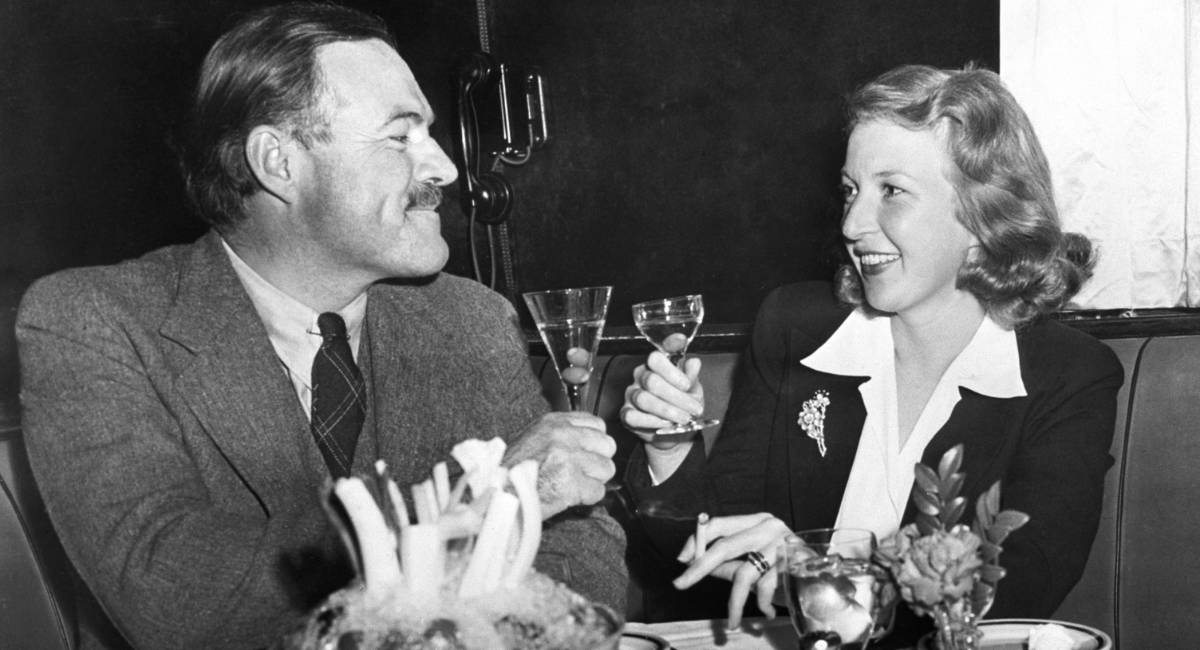 (The Bridgehead) Few novelists have had their [lives] examined like Ernest Hemingway, but the most celebrated writer since Mark Twain finally got the Ken Burns treatment on PBS last month. The three-part series covers the now-familiar story without much additional detail; his childhood in Oak Park, Illinois; his service with the Red Cross in Italy in World War I; Paris with his first wife, Hadley Richardson; his career as a novelist and journalist with three more wives—Pauline Pfeiffer, Martha Gellhorn, and Mary Welsh. The fishing expeditions, African safaris, and the Spanish Civil War and World War II are all covered in depth, and the violence feels like a foreshadowing as Burns documents his descent into mental illness and alcoholism.

Hemingway’s spare sentences and “iceberg theory”—the idea that the deeper meaning of a story should be implicit rather than explicit—revolutionized American literature. So, in many ways, did the crude language and explicit themes that he often relished exploring with his modernist comrades, which debased his genius. His mother Grace put it well in a letter to him in 1926 after the publication of his first novel, The Sun Also Rises. Many had praised the work, she wrote. “But the decent ones regret that you should use such great gifts to so degraded a strata of humanity…what is the matter? Have you ceased to be interested in loyalty, nobility, honor and fineness of life?…If you are going through domestic disillusionment or drink has got you—throw off the shackles of these conditions and rise to be the man and the writer God meant you to be.”

Grace Hemingway struck closer to home than she realized. Ernest would abandon his first wife and their son “Bumby” (whom he would remain close to) the following year, and heavy drinking would degrade his writing, exacerbate his mental illness, and eventually contribute to his suicide.

That same year, 1927, Hemingway would publish one of his most powerful short stories, Hills Like White Elephants. Set at a train station in Spain, the entire story constitutes a conversation in which an American tries to persuade his girlfriend to get an abortion while they wait for the train to Madrid. The word abortion is never mentioned. The two have drinks while the man tells “Jig” to have an operation, dismissing its seriousness and arguing that it would be a simple matter. Jig wonders what will happen if she has the procedure; the man assures her that it will fix all their problems. He won’t force her, but he thinks the operation would be best. Jig says she’ll get the procedure so long as he will still love her and stay with her afterwards.

He promises that he cares for her deeply; Jig wonders, while staring at the scenery and the hills that look like white elephants, if they could ever be truly happy afterwards. The two debate this at length, and finally Jig begs him to stop talking. They finish their beers and board the train. It was a masterpiece filled with what Hemingway longed to write the most–“true sentences.”

Female literary critics point to the dialogue in this story as evidence that Hemingway could, in fact, “write women.” Jig’s frustration as the man attempts to manipulate her into an abortion she obviously does not want (and critics disagree on whether the story concludes with her decision to get one or not) is a conversation unfortunately familiar to legions of women. Hemingway immortalized a conversation not just of that time, but of all times—of a man desperately attempting to avoid responsibility, trying to persuade a woman who is already a mother that she is not yet a mother, and promising that by removing the baby they can be happy once again and everything will be as it was. It is, of course, a lie. There are no happy endings to abortion stories.

Hemingway’s biographers caution against reading too much autobiography into Hills Like White Elephants, but Ernest’s life, too, was scarred by abortion. How many of his children died at the hands of abortionists? It is hard to say, not least because, as Hemingway’s character Robert Cohn noted in the original typescript of The Sun Also Rises, the writers of the Lost Generation “lived in an atmosphere of abortions and rumors of abortions,” a macabre paraphrase of the King James Version’s Matthew 24:6 that indicates Hemingway’s fundamentally Christian cultural context. Sexual liberation came at a cost, and that cost was paid by the children often conceived in casual coital encounters.

There appears to be some conflict between Hemingway’s biographers on this point. In his 1992 Hemingway: The Paris Years, Michael Reynolds writes that abortions were not hard to procure in Paris, but that when Hemingway complained to his friends that Hadley was pregnant for a second time (it proved to be a false alarm), one of them told him to shut up and either “do something about not having it, or you have it.” But according to Reynolds, “a boy raised in Oak Park did not easily accept that solution.”

Hemingway himself frequently used the term “abortion” as negative descriptor. During he and Pauline Pfeiffer’s separation in the 1920s—a parting imposed by his first wife Hadley, who said she would grant Hemingway a divorce if nothing had changed by the end of it—he wrote to her that “when two people love each other terribly much and need each other in every way and then go away from each other it works almost as bad as an abortion.” He also used the word to describe a particularly awful war experience. The word clearly had an ugly connotation for Hemingway.

However, Jeffrey Meyers, author of the gargantuan 1984 Hemingway: A Biography, penned an essay in 1999 stating that both Hemingway’s first and second wives—Hadley and Pauline—“had abortions when Hemingway did not want another child,” and that he had been compelled to keep many such details secret until a number of Hemingway associates and family members had died. Meyers cites these events as a certainty rather than as a point of speculation.

Ruth Hawkins, author of Unbelievable Happiness and Final Sorrow: The Hemingway-Pfeiffer Marriage(published in 2012) also believed that Pauline, a Catholic, may have had an abortion. As Hawkins noted in an interview with The Hemingway Project:

The idea that Pauline may have had an abortion early in her relationship with Hemingway came as a surprise to me.  I had a typist transcribing all of the correspondence between Ernest, Pauline, and the various Pfeiffers so that I would have a searchable database.  As soon as she finished the section on the 100 days separation, she came to me and said, “When did Pauline have this abortion they keep referring to?”  She just assumed it to be common knowledge.  When I read the letters all together, I began to think that maybe there really was something to all the collective references to surgical operations, abortion analogies, getting healthy again, etc.  As I conducted my research, there seemed to be many other references to support this—Pauline’s sudden mood change during the trip with Hadley and Virginia through the Loire Valley (possibly when she learned she was pregnant), Hadley’s comments about Pauline looking so forlorn at Cap d’Antibes (possibly right after the abortion), and Hemingway’s short story “Hills Like White Elephants,” which deals with abortion and was presented to Pauline on their honeymoon.

READ: A look back at the sexual abuse allegations that shook the abortion industry

While several Hemingway biographers mention potential abortions with his first two wives, Hemingway’s most comprehensive biographer to date—Mary Dearborn—does not. In fact, she cites evidence that seems to contradict this. During Ernest’s falling-out with his younger sister Carol over her marriage to Jack Gardner in the 1930s, Ernest accused her—baselessly—of saving money for an abortion. According to Dearborn: “He believed, he told her, that abortion was ‘murder,’ not for religious but ‘biological’ reasons. Interfering with pregnancy would be bad for her ‘spirit.’ Had Hadley or Pauline had an abortion, Jack, Patrick, and Gregory would have been ‘murdered.’” This seems a strange thing for Hemingway to write in private correspondence if Hadley and Pauline had, as several of his biographers have said, undergone abortions.

Hemingway’s biographers agree, however, that his third wife, journalist Martha Gellhorn, did abort a child that she and Ernest had conceived together. Dearborn writes that Hemingway badly wanted a daughter, and probably didn’t realize when he married Martha that she couldn’t have children, likely due to her previous abortions. Meyers provides more details, writing that “Martha later told an English friend that her loathing of Hemingway was so great that she aborted their child without even telling him she was pregnant. ‘There’s no need to have a child when you can buy one,’ she boasted, referring to the Italian boy she had adopted after the war. ‘That’s what I did.’ Apart from her dislike of Hemingway and her awareness that their marriage was breaking up, Martha may have feared childbirth and certainly wanted to keep her youthful figure and pursue her career without the burden of an infant.”

But while Hemingway has been praised—then and now—for the sensitivity he displays in portraying the pressure the young woman in Hills Like White Elephants was under to subject herself to an abortion, one of the cruelest things he ever wrote, published posthumously, covered the same subject. One of Hemingway’s acquaintances was the American poet and critic, Dorothy Parker. In 1922, Parker became pregnant by the playwright Charlie MacArthur. When she discovered he was unfaithful, Parker opted for an abortion at one-and-a-half trimesters, and the doctor ensured that she saw the aborted baby. The sight of the child’s tiny hands crushed Parker, and she reportedly obsessed over what she’d seen, telling anyone who would listen. Shortly thereafter, she attempted suicide for the first time….

Editor’s Note: This article was published at The Bridgehead and is reprinted here with permission.