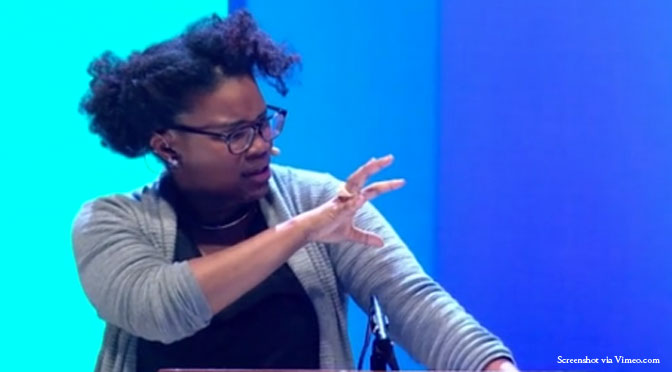 Hearing this accusation from the non-Christian, pro-choice camp is unsurprising. Hearing it from those who claim to be Christians is unsettling. Because it’s simply untrue.

This was the in-a-nutshell claim of #BlackLivesMatter activist Michelle Higgins at December’s InterVarsity Urbana Conference. But while evangelical pro-lifers reacted by saying Higgins’ comments were less than constructive, InterVarsity seemed more disturbed by pro-lifers’ reaction to Higgins’ statements than by Higgins’ statements themselves. They came to her defense just a couple days ago, saying…

Some concerns stem from an invited speaker at Urbana 15, who issued a prophetic call for sacrificial lifestyle change that dignifies all people. As an illustration, she challenged those who work to end federal funding of Planned Parenthood to take the next step with their justice activism and adopt orphans currently in foster care.  Some heard her words as a dismissal of pro-life activism. That was not her intention, and she has since clarified on her blog that she cares about both the born and the unborn.

First, it is difficult not to “hear [Higgins’] words as a dismissal of pro-life activism” when she stated at the conference:

We are too busy withholding mercy from the living, so that we might display a big spectacle of how much we want mercy to be shown to the unborn. Where is your mercy? …

What is your goal in only doing activism that makes you comfortable?

Second, InterVarsity claims that Higgins’ blog contains clarifications about her remarks, but one post on her Twitter account makes clear that she is a defender of the nation’s largest abortion business, Planned Parenthood.

On November 28th of last year – just a month before the Urbana conference – Higgins posted the following:

@DavidLeonGill abortions at PP are not every day. PP in STL has been a help to girls I know personally, girls Church folks have mocked

Even if Higgins is unaware of this, surely, excusing Planned Parenthood for the fact that it does more than a third of the nation’s abortions every year isn’t something a person who holds all life in high regard would do. In fact, Higgins’ tweet about Planned Parenthood’s “help” for girls she knows could actually turn more young women toward this organization, resulting in a greater loss of lives.

Higgins’ claim that Planned Parenthood doesn’t do abortions “every day” is, at best, disingenuous. Planned Parenthood’s 2015 annual report states that the organization aborted 323,999 preborn children last year – that’s approximately 888 per day on average.  Let’s not pretend that because Planned Parenthood only kills children two days per week, the “good” they do on the other five is what really counts.

Higgins’ Twitter friend (pictured in the tweet above) at first tried to speak truth to Higgins about the abortion giant. But it appears that he gave up when faced with an anecdote about two women Higgins personally knows.

@seriovitium @AfroRising That's not a lie. Each location doesn't do that. Michelle is a personal friend of mine, so please be respectful

Attempting to save those children, as well as aid their mothers, is merely a “big spectacle” to Higgins. According to her, saving them isn’t “mercy.” If they were classrooms full of elementary school children, perhaps Higgins would think differently.

Planned Parenthood of St. Louis is also known for sending women to the hospital. A lot. Unfortunately, we don’t know as many details as we should, because the St. Louis Fire Department has chosen to conceal the 911 records from the public. Operation Rescue reports:

Operation Rescue had been provided 57 records, hinting that there were many more emergencies at Planned Parenthood that have so far been documented. However, the records, consisting of supposed Computer Aided Dispatch printout, were so heavily redacted that even the dates of the incidents had been erased.

Is Ms. Higgins aware of this? Is the concealment of life-threatening incidents involving women undergoing abortions really serving women or the public interest?

Why wouldn’t pro-lifers want to spare young women from going to a facility that will not only kill their preborn children but potentially put their own health at risk?

Ms. Higgins’ seems to have great concern for orphans and for children in foster care. But adoption and pro-life work go hand in hand – they’re not opposites, and Higgins shouldn’t present them as such. Higgins also made a grave mistake in juxtaposing the terms “living” and “unborn” in her speech at the Urbana conference, possibly tipping her hand. Perhaps she doesn’t see preborn children as children at all – which would put her in opposition to InterVarsity’s stated views.

Contrary to Higgins’ assertions, it is not “comfortable” to stand on the sidewalks outside abortion facilities in inclement weather, offering tangible, life-affirming help to women entering those facilities, while facing the hostilities of their accompanying partners as well as pro-abortion “escorts.” It is not “comfortable” for post-abortive women to tell their stories of abortion regret in the hopes that some might be saved. It is not “comfortable” to sit across from a terrified young woman who is considering abortion, praying for the right words to say and knowing that you may have just this one moment, this one chance, to save her baby’s life and prevent her from a lifetime of regret.

It is anything but “comfortable.” Pro-lifers fight for the most basic human right of all – the right to exist.  Without that right, no other rights can be accorded.

For this, pro-life activists deserve respect, not derision.