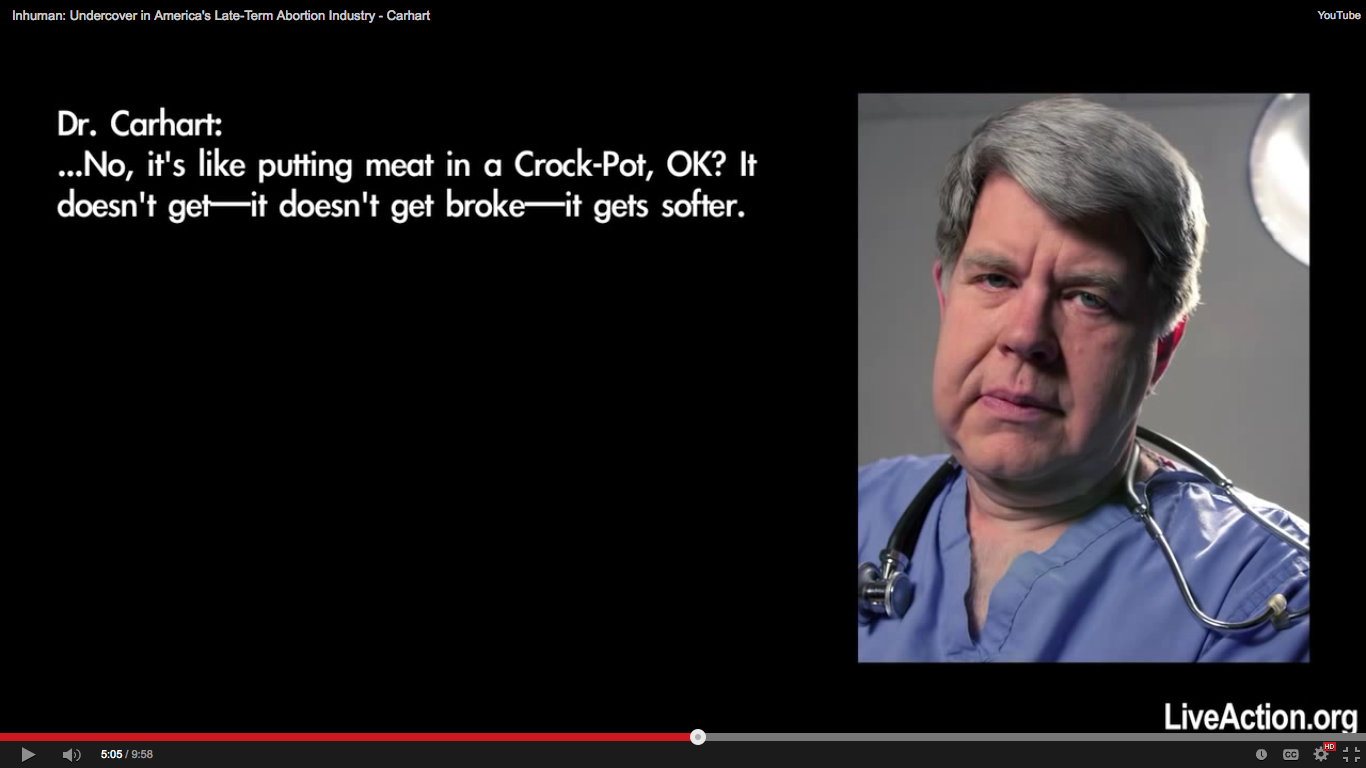 The following quotes are taken from Live Action’s Inhuman Investigation, where late-term abortionists were discovered agreeing to not resuscitate babies who might be born alive after an abortion.

In this horrifying statement, late-term abortionist Carhart was describing what happens to a baby’s body after poison has been injected into her heart. She dies inside her mother’s womb and stays there for days, waiting to be born, dead. Basically, the preborn, well-developed baby begins the first stages of rotting inside her mother. Here, Carhart jokes about what he does to a baby who cannot be delivered in one piece after dying inside her mother’s womb because of a poisonous injection into her heart. 3) “Call us first…we shouldn’t put you at risk to try to save a pregnancy that we’re trying to terminate.” (Laura Mercer)

When a pregnant woman – whose baby had already been purposely misdated so a late-term abortion could be performed – asked if she should call an ambulance if her water broke, abortionist Laura Mercer said this: Dr. Mercer: No, call us first. And that’s because, this is, as you can imagine not something that most doctors deal with regularly, and so if you showed up on in an average emergency room with an emergency room physician who’s not a gynecologist, probably has never seen or done a termination, they will treat you as though you are somebody with a desired pregnancy, that, whose bag of water broke, and it’s a completely different situation.

Woman: So they would basically like, try to take care of it.

Dr. Mercer: Right they would intervene, and do all kinds of crazy things that you don’t need to have done to you.

Dr. Mercer: Um, we really put women through a lot when they are in those situations to try and save their pregnancy and we shouldn’t put you at risk to try to save a pregnancy that we’re trying to terminate. So like they just, they just don’t get it, they don’t know. And even if you were to tell them, their brain, they’re just not used to it…

4) Come to us if the baby’s born and moving. (Laura Mercer)

Despite abortion clinics not having the equipment to keep premature babies alive, Mercer told the woman to bring a baby who survived an abortion to them – not to the emergency room.

Woman: –not to get graphic, but if it’s, like, moving and stuff–

Dr. Mercer: No, these are good questions.

Woman: –I would still come to you?

Woman: OK. So you wouldn’t like resuscitate it, or like give it anything to help it survive?

5) “It’s more common that it comes out in pieces.” (Laura Mercer) Woman: Does it [the baby] come out in, like, pieces, or does it come out whole?Dr. Mercer: Um, it depends. Every case is a little bit different, ‘cause the medicines we give you will help us do different things, um, but it’s more common that it comes out in pieces. …

Dr. Mercer: We use a combination of suction and then real instruments to, literally, go in and grab and pull pieces out. A preborn baby at 20 weeks. This “doesn’t look like a baby” to Dr. Mercer.

Even though a baby’s heartbeat starts at 21 days, Mercer directly lied to her patient, claiming that the heartbeat didn’t start until eight weeks. And even though the patient directly asked if all the baby’s organs were present, Mercer evaded the question, completely ignoring that all of the baby’s systems had been in place for months. Finally, Mercer claimed that a baby over 23 weeks old “doesn’t even look like a baby.”

Dr. Mercer: [At] 23 weeks and 2 days…uh, the fetus is about 8 inches from the top of its head to its buttocks, it has a beating heart, fingers, toes, and can make spontaneous movements.

Woman: So it does have a beating heart at that point?

Dr. Mercer: It does, yeah. Like right now it does have a beating heart. That starts right around 8 weeks. …

Woman: OK. So but like at this point, does it have, like, all of its organs and all of that stuff? Like, is it already fully developed?