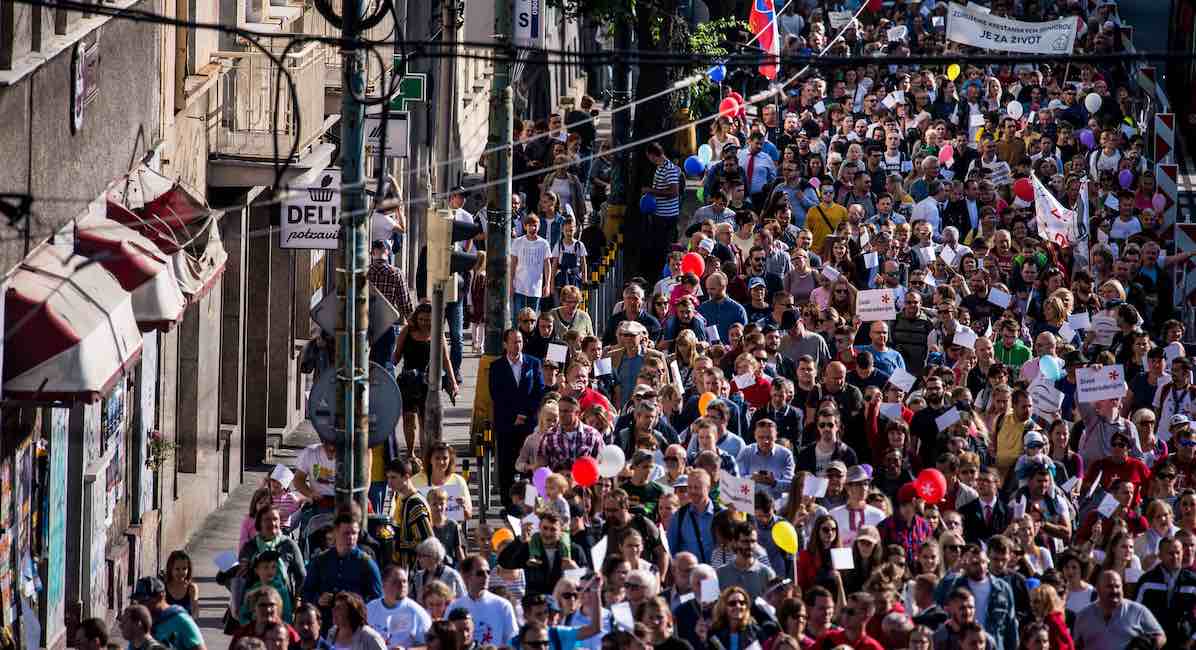 An estimated 50,000 pro-life Slovakians marched in the capitol city, Bratislava, on Sunday. Parliament will take up the issue of further abortion restrictions next month. Several different abortion restrictions have been proposed, including decreasing the abortion limit to six weeks, to eight weeks, to ban it except in cases of rape, or to ban it altogether, without exceptions.

Currently, abortion is legal for any reason up to 12 weeks in Slovakia. Slovakian law, which dates back to the days of Communist rule, also allows abortion up through 24 weeks “on health grounds with the woman’s consent, or at her instigation, if her life or health or the healthy development of the fetus are endangered, or if fetal development manifests genetic anomalies.” Parental consent is required for girls under 16 years old, and parental notification is required after the procedure for girls aged 16-18.

Sunday’s March for Life was the third national pro-life march in the country. Earlier marches were held in 2013 and 2015. Slovakia has about 5.4 million citizens, so roughly 1% of the country’s total population marched, a much higher percentage than that of U.S. marchers. By the numbers, the U.S. abortion rate is more than double Slovakia’s when you adjust for population size differences (862,000 in the U.S. in 2017 — the most recent data available — as compared to 6,000 abortions in Slovakia last year). Marchers in Slovakia celebrated a decrease in abortions by almost 50% over the last decade. U.S. abortions, by comparison, have also decreased during the same time frame, but much less dramatically at around 20%.

The March was primarily organized by the Catholic Conference of Bishops of Slovakia (KBS), along with the nongovernmental organization Kanet. Bratislava’s Archbishop Stanislav Zvolenský told the crowds, “Man has not given life to himself; it was given to him.” March organizer Marek Michalčík said, “We want freedom for unborn children to be able to be born and live free human lives.”

An opinion poll by Focus earlier this month found that some 34% of Slovaks “definitely agree” or “rather agree” with limiting abortion to before 12 weeks.