Medication abortion, also known as the abortion pill, has been marketed as a simple answer for women who want an abortion, offering them the convenience of taking their preborn baby’s lives in the privacy of their own homes. But in reality, medication abortion has had destructive effects — not just on preborn children, but on women and society.

Approved by the Food and Drug Administration (FDA) just 18 years ago, the “abortion pill” consists of two different medications. One medication, mifepristone, is “a synthetic steroid [that] interferes with a fertilized egg’s ability to adhere to the lining of the uterus.” Mifepristone works together with misoprostol, a medication which causes uterine contractions. At the time of approval, FDA Commissioner, Dr. Jane Henney, said the FDA approved mifepristone after a “careful evaluation of the scientific evidence related to the safe and effective use” of the drug.

But that “safe and effective” drug combination operates more like a human science experiment with deadly results.

The impact on women

1. Incomplete abortions. Focus on the Family reports that sometimes medications abortions are incomplete, and if so, “the woman has the option of taking another round of drugs or having a surgical abortion….”

Initially, the abortion pill was only available for 49 days past the woman’s last menstrual period; however, in 2016, the FDA upped that to 70 days, which, in turn, increased the risk for women, despite promises of safety. When it was approved in 2000, Gloria Feldt, then-president of Planned Parenthood, called it “as significant a technological advance for women’s health as the birth-control pill was 40 years ago. It will enable them, if they choose to terminate a pregnancy, to do that earlier (and) to do it without surgery.” For many women, Feldt claimed, this is “positive.”

READ: ‘I thought I was dying’: 3 women share their abortion pill horror stories

2. Frightening side effects. Research on the abortion pill’s side effects and complications, however, is anything but positive… it’s disturbing. Side effects include pain, weakness, bleeding, nausea, vomiting, diarrhea, chills, and fever. Focus on the Family notes that bleeding “can potentially last for several weeks, and can be severe enough to require a transfusion.” Every woman “will experience” bleeding, which “is more common the earlier a woman is in her pregnancy.”

Beyond side effects, though, are serious complications that may occur. In a medical office, complications can be treated immediately and adequately, but a secret at-home abortion risks the mother’s life and takes the baby’s.

While Planned Parenthood, NARAL, and others claim the abortion pill is simple and safe, the FDA historical information report shows that the organization had to issue a public health advisory regarding a potentially lethal sepsis risk. The many personal stories of women being injured or killed by the abortion pill add to the mounting evidence against the pill’s safety.

Still, Women on Web, an organization distributing abortion pills to women where abortion is illegal, insists that “[t]his risk [of using the abortion pill] is equal to that of requiring medical care for an allergic reaction after using penicillin.”

3. Misogynist attitudes persist. In California, public universities may soon be forced to offer the abortion pill to students. Instead of focusing on offering childcare and other help for pregnant and parenting students on campus, lawmakers prefer to push the idea that women can’t be students and mothers. Instead, they must sacrifice their children at the altar of their educational goals. This view is not pro-woman.

In the workplace, it’s no better. Working women who become pregnant are still punished, denied promotions, and even fired. Men who become fathers, however, experience the complete opposite. The availability of abortion (and now, the implied “ease” of taking a pill to end a pregnancy) has hindered, rather than helped, working women.

The impact on society

1. Profits take precedence over women’s safety. In 2006, several women died while using abortion pills prescribed by Planned Parenthood. Planned Parenthood responded by changing they way it administered the pills. It had cut corners by requiring fewer office visits, and the result appeared deadly, though the abortion corporation refused blame. And there have been other reports of death from the abortion pill.

Medication abortions have been steadily increasing, even as overall abortion numbers are decreasing. According to the Guttmacher Institute, “Over the past 15 years, it has been used in more than 2.75 million abortions in the United States.” For population control enthusiasts, this may be welcome news — but for economies attempting to maintain a healthy population replacement ratio and sustain a workforce, it isn’t.

The Center for Disease Control’s last Abortion Surveillance Report, which reports trends from 2005-2014 (Table 22), notes that in 2014, nearly 23 percent of all abortions were “performed by early medical abortion” before 8 weeks gestation. “However,” the report states, “these numbers are not reliable on their own, as the counts are actually higher since 16 states either don’t report medication abortions, or don’t account for it in its own category or gestational age. Those states include some known for their high abortion numbers, such as California… and New York State” (NYC reports separately). The report notes that “it is only possible to speculate on what the real numbers are, but it’s clear they are growing.” 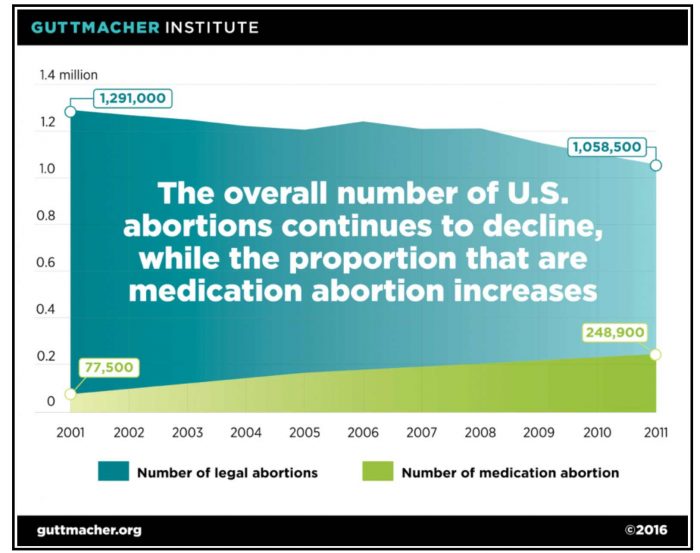 2. At-home abortions are a dangerous trend. The abortion pill puts women in the position of at-home physician, in effect, supervising their own ‘planned miscarriages’ (abortions). Medical abortion also leads to mail order and telemedicine abortions, two things the abortion industry is pushing for. In effect, these allow women to conduct alternate procedures on themselves, without ever physically encountering a physician.

Recent changes in FDA prescribing protocol have made medication abortion more affordable and accessible, as well as more dangerous, as it removes restrictions for in-person follow-ups, and it removes requirements for the abortion pill providers to be medical doctors, according to the Guttmacher Institute.

Besides women self-administering their abortions, sometimes their partners have done so — without the women’s consent. In one recent case, a doctor didn’t want his girlfriend to have their child, but she refused to abort. He invited her for drinks and slipped the pills into her drink — at four times the effective dose. Another boyfriend gave his girlfriend the abortion pill by tricking her into thinking they were antibiotics. Worldwide, this kind of story has been repeated too many times.

The abortion pill has only promoted egregious medical ethics and health violations, all in the name of “choice.”

Editor’s Note: If you have taken only the first medication in the abortion pill regimen and are experiencing regret, there is a chance you may be able to reverse the abortion. Visit AbortionPillReversal.com.