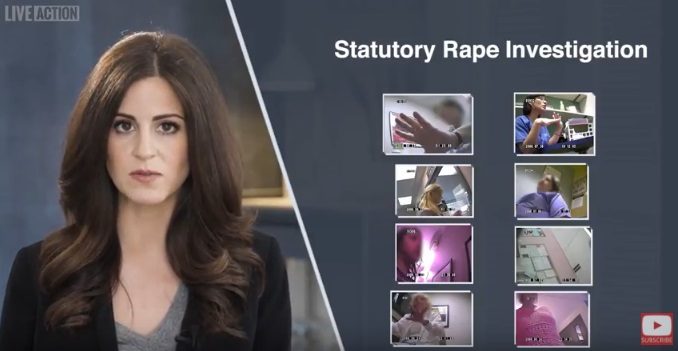 Before the 2008 and 2011 investigations, however, Lila Rose documented how a Planned Parenthood in California was willing to cover up the sexual abuse of a minor.

In 2006, as a college student at UCLA, Rose was the editor of a pro-life magazine called The Advocate. For one issue, she secretly recorded the school’s head nurse, Ann Brooks, at the Arthur Ashe Student Health and Wellness Center. Posing as a pregnant student, Rose caught Brooks on tape encouraging her to have an abortion and telling her how to get her parents’ insurance to pay for it. Brooks also coached Rose on how to keep the abortion a secret from her parents, despite using their insurance. Transcripts of the recording were published in The Advocate.

A short time later, Rose decided to go to Planned Parenthood. Posing as a 15-year old girl, she went to the Planned Parenthood facility with a hidden recording device. Rose told staffers there that she was 15 and that her boyfriend, who had supposedly gotten her pregnant, was 23. A 23-year-old having sex with a 15-year-old is statutory rape. California law required Planned Parenthood to report the “relationship” to the authorities, in order to protect the underage victim.

Author Tony Perkins, in his 2015 book, “No Fear: Real Stories of a Courageous New Generation Standing for Truth,” describes what happened at Planned Parenthood after Rose told workers her boyfriend was a 23-year-old man:

The Planned Parenthood staffer ushered Lila behind the reception counter to put some distance between her and the others in the waiting room. Behind the counter Lila repeated her situation, adding that her boyfriend was 23 years old. In a hushed tone the receptionist said, “If you’re 15, we have to report it. If you’re not, if you’re older than that, then we don’t need to.”

The Planned Parenthood worker told Rose to claim that she was 16, so that the facility would not be legally bound to report the abuse.

“You could say 16,” the woman suggested.

“Well, just figure out a birth date that works.” With a shrug, the receptionist added, “and I don’t know anything.”

Rose took the papers and sat down. She watched as pregnant girls, many of whom looked underage, were taken one by one into the back of the facility for their abortions. When no one was looking, Rose left. With her, she took the recorded evidence that Planned Parenthood was engaged in covering up criminal activity and breaking the mandatory reporting law.

When Rose posted the video on YouTube, it went viral. The story became national news. Multiple news outlets covered the story, and Rose appeared on television.

In full damage control mode, Planned Parenthood resorted to legal intimidation of Lila, sending a cease-and-desist letter. The document stated that her undercover recordings violated California law. They threatened to sue her in civil court for $5000 for each offense. Planned Parenthood demanded she stop the undercover investigations, remove the existing video from YouTube, and turn the original recordings and all copies over to Planned Parenthood.

The threat from the billion-dollar abortion giant was more than real to this young woman with only $200 in her bank account; it was overwhelming. But Lila refused to yield to fear, no matter how strong the attacks against her.

Rose would go on to make Live Action a major organization. Over the years, Live Action would document more illegal activity at Planned Parenthood and other abortion facilities.

In another investigation, Live Action’s undercover journalists posed as a pimp and a prostitute. In seven different facilities, Planned Parenthood workers helped the supposed pimp and declined to call the police about his alleged sex trafficking ring. They neglected to contact law enforcement even after they were told the girls involved were minors. Planned Parenthood workers were caught on tape advising the pimp how to hide that the girls were victims of sex trafficking when going into abortion facilities in the future (claim the girls are students) and giving advice to the pimp on how his girls could still make money while they were temporarily unable to have sex after their abortions (when the girls were recovering from the abortions, they could use their hands to stimulate men who hired them).

Live Action also documented abortionists and abortion workers telling women late in pregnancy that if the baby were born alive, they would make sure the child died. One worker told the undercover journalist that a living aborted baby would be drowned in a solution. Another investigation showed abortion workers lying about fetal development to pregnant women they thought were considering abortion. One abortion worker told the pregnant woman that a baby in the womb does not have a heartbeat until 16-17 weeks. Medical science documents that a baby’s heart begins beating as early as 16 days in the womb.

Two other investigations showed Planned Parenthood offering to abort babies for sex selection, because a woman wanted a boy and not a girl (in violation of the law) and enthusiastically accepting donations earmarked to abort black babies.