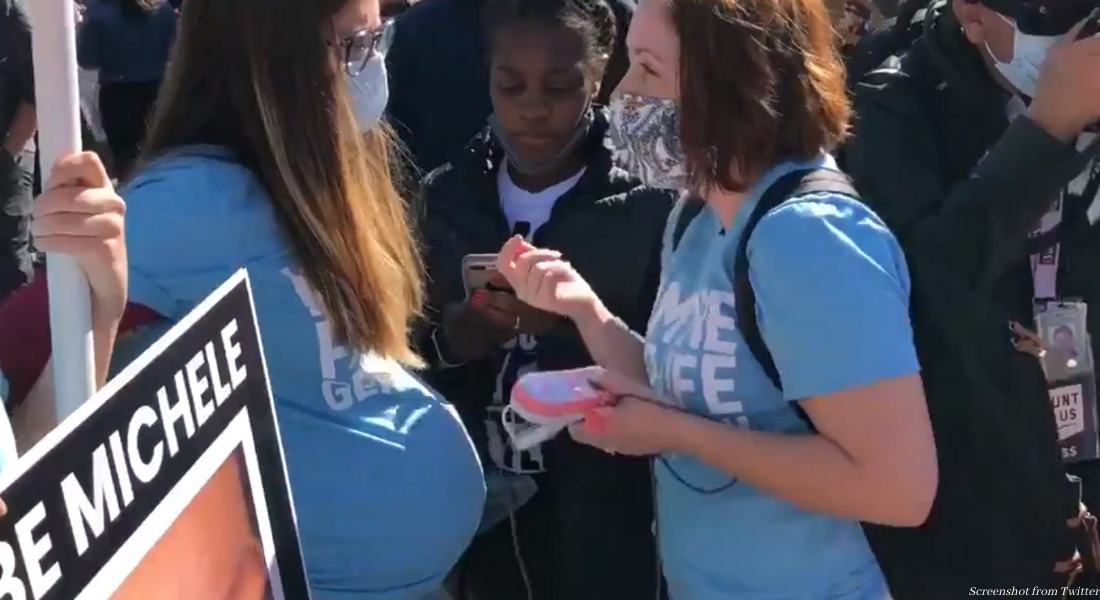 A pregnant pro-life activist was accosted by abortion supporters at the Women’s March, which was attended by thousands in Washington, D.C., this weekend. Matthew Miller, a reporter for the Daily Caller News Foundation, captured the verbal attacks on video.

The first altercation, posted by Miller on Twitter, showed a pregnant woman broadcasting her preborn daughter’s heartbeat on a sonogram for the crowd to hear. A group of abortion advocates could be seen laughing together, while one loudly said, “I would want to kill myself if I was that baby.”

When a reporter stepped over to interview the woman, asking her to clarify, she reiterated her stance. “I said, imagine using your child for political s***,” she said, gesturing towards the pregnant woman. “I’m saying if I was that child, I’d probably want to kill myself, yeah.”

Women’s March protesters scream at pro life pregnant woman. She was playing her babies heartbeat on a sonogram for the crowd to hear. pic.twitter.com/9LE2TLrZ5A

The pregnant woman in question was later interviewed. She said she attended the Women’s March to show that her preborn child is a human being. She had been trying to find her baby’s heartbeat to project it to the crowd. “To show that my daughter is a real human,” she said of her motivation for attending the march. “Yes, she’s in my body. Yes, I’m responsible for her, but her life matters, too. This march, they’re not marching for preborn women. That’s why I’m here, and that’s why my daughter’s here, so that they can have a voice as well.”

READ: Abortion supporters know the truth about abortion and ‘heartbeat bills’ but won’t admit it

She further said she hoped the abortion advocates in the crowd simply listened with an open mind. “We’re not here to fight anyone,” she said. “We’re just here to say hey, we want all women to be included, whether they’re born, unborn, black, white, different opinions, different genders, you name it.” Despite her non-violent attitude and peaceful participation in the protest, the woman said she had been facing vitriol from the abortion advocates the entire day.

“We’re leaving women out, by having this conversation, by them yelling at me,” she said. “Saying ‘eff off,’ ‘go home,’ ‘your kid should be aborted.’ That’s disgusting. That’s not feminism.”

Another incident captured by Miller featured other pregnant women being screamed at, this time by men.

While abortion advocates insist that abortion is needed so that women can be equal to men and to find success, this view is misogynistic and assumes that women’s fertility makes them defective or deficient. Pro-abortion “feminism” is failing women. Women deserve more, and deserve better, than believing they have to sacrifice their children to achieve equality with men.