(Secular Pro-Life) I recently stumbled upon a Facebook post by Shout Your Abortion, setting forth “language to avoid when talking about abortion” and their preferred dehumanizing euphemisms. Most of it was unsurprising (Abortion supporters hate the word “baby”? You don’t say!), but this one caught my attention: 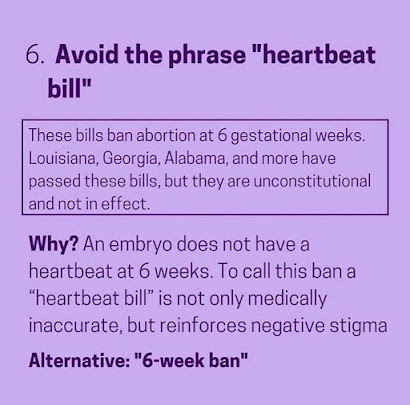 Avoid the phrase “heartbeat bill”
These bills ban abortion at 6 gestational weeks. Louisiana, Georgia, Alabama, and more have passed these bills, but they are unconstitutional and not in effect.
Why? An embryo does not have a heartbeat at 6 weeks. To call this ban a “heartbeat bill” is not only medically inaccurate, but reinforces negative stigma
Alternative: “6-week ban”

We have written before about the pro-choice movement’s steadfast science denial on this issue. Shout Your Abortion is simply wrong; a human embryo does have a heartbeat at six weeks. If you find that fact stigmatizing, ask yourself why.

But there’s an additional level of irony here that we should take a moment to appreciate.

Here are the relevant portions of Louisiana’s heartbeat bill:

Except as provided in Paragraph (2), (3), or (4) of this Subsection, it shall be unlawful for any person to knowingly perform an abortion with the specific intent of causing or abetting the termination of the life of an unborn human being when a fetal heartbeat has been detected.

Contrary to Shout Your Abortion’s post, Alabama does not have a heartbeat bill; it went a step further and passed a total abortion ban instead. But here are two more states that do have heartbeat bills:

A physician shall not perform an abortion upon a pregnant woman when it has been determined that the unborn child has a detectable fetal heartbeat, unless, in the physician’s reasonable medical judgment, a medical emergency exists, or when the abortion is medically necessary.

“Fetal heartbeat” means cardiac activity, the steady and repetitive rhythmic contraction of the fetal heart within the gestational sac.

Except as provided in paragraph (b) or (c) of this subsection (2), no person shall knowingly perform an abortion on a pregnant woman with the specific intent of causing or abetting the termination of the life of the unborn human individual that the pregnant woman is carrying and whose fetal heartbeat has been detected.

“Fetal heartbeat” means cardiac activity or the steady and repetitive rhythmic contraction of the fetal heart within the gestational sac.

Notice what they all have in common? None of them identify a gestational age. Georgia notes the existence of a heartbeat by six weeks in a related informed consent measure, but not in the body of its heartbeat bill; the other states’ heartbeat bills don’t mention the six-week milestone at all! These abortion limits are based on the presence of a detectable heartbeat, rather than on a particular week of pregnancy.

That means that Shout Your Abortion and its cohorts must have followed this three-step process:

1. Read bills banning abortion when there is a heartbeat.

2. Determine that the laws ban abortion after six weeks, because that is when the heartbeat (steady and repetitive rhythmic contraction of the fetal heart) begins.

If abortion supporters had proof that the human heartbeat does not begin until some later point in pregnancy, it would be in their financial interest to argue that heartbeat bills don’t apply until that later point. But they don’t make that argument, because at some level they know the truth. They’re just unwilling to contend with the harsh reality that abortion stops a beating heart.