The abortion industry has a vested interest in promoting abortions as empowering for women, which means downplaying the effect it has afterward. Yet women are still speaking out, sharing their experiences and the grief they feel after having abortions — and how they’re expected to keep quiet about it.

A recent Buzzfeed article explored what women called the “forbidden grief” of being post-abortive. It began with a viral TikTok video from Kaylyn Weston discussing her abortion, which has gained over 1 million views.

“A year ago, I found out I was pregnant. I decided to have an abortion because I thought it was the right choice,” she began. “What I feel no one talks about is this ‘forbidden grief’ that many women struggle with after an abortion. On the right side, you’re labeled a sinner. On the left, you’re expected to only gain relief and an open future. When in reality, it feels like all my doors have been closed. No one wants to hear about the negative effects an abortion can have without it getting political.” 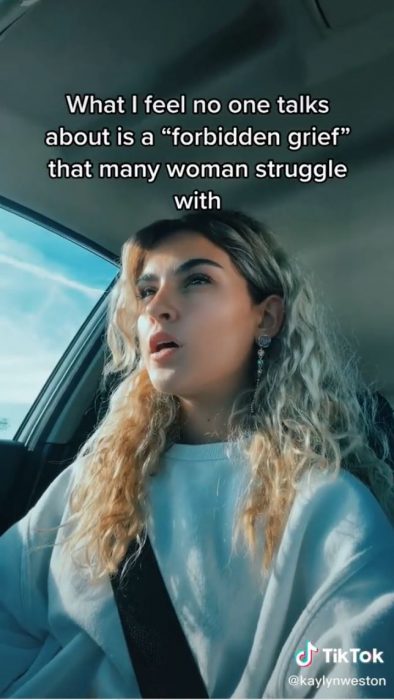 She invited other women to comment as a “safe space,” telling them that they are not alone. Many other post-abortive women did share their feelings, explaining that even if they didn’t necessarily regret their abortions, they still had negative feelings about them.

In a statement to Buzzfeed, Weston explained more about why she called the grieving process behind abortion ‘forbidden’:

To me, forbidden grief is the grief that a woman may endure after having an abortion. It is isolating, heavy, and difficult to process. It’s referred to as forbidden because we feel we shouldn’t experience grief of any kind, as it was our choice to terminate the pregnancy. However, a loss is a loss, and just because a woman decides to end her pregnancy does not mean that she will not regret or feel any negative emotions towards it.

I feel the biggest misconception with abortion is that women are ‘happy’ to do it and feel free afterwards, when the reality can be the complete opposite. It can take a woman years to cope and process that grief, and for many of us, it can be a lifelong weight that we carry with us.

Weston has since created a support group for post-abortive women who are experiencing grief.

“You can be in a room full of people, and a single trigger will make you think of your unborn child and suddenly, you’re isolated and trapped in your sorrow. No one understands that pain except for other women who have had an abortion and experience that forbidden grief,” she said. “I’m not going to promise that a support group will alleviate all pain and grieving, but it is such a weight lifted to know you are not alone.”

The majority of the medical literature has found that post-abortive women are at a higher risk for mental health disorders, such as anxiety, depression, drug and alcohol abuse, and suicidal behavior, yet the abortion industry denies these risks. The Turnaway Study, for example, claimed to debunk the notion that women might regret their abortions, but that study was found to be deeply flawed.

Women deserve to know the truth about abortion: an innocent life is taken, and women who were promised freedom often end up with more consequences than they bargained for.