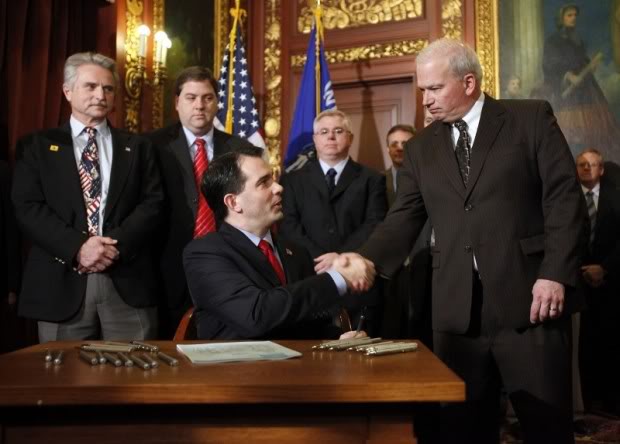 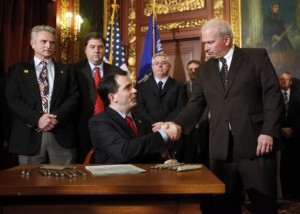 Over the past few months, the actions of Wisconsin’s Republican leadership have raised red flags among pro-lifers for abandoning legislation that would ban sex-selection abortion and protect Wisconsinites’ conscience rights against forced subsidizing of abortion. Disturbingly, not only has the trend continued, but it may be getting worse.

First, Wisconsin Family Action reports that the GOP-controlled state Senate “refused to schedule” a final vote on AB 206, a bill making available “Choose Life” license plates (the sales of which would fund pregnancy resource services), “on the last day of session, effectively killing it.”

Granted, license plates are hardly the biggest item on the pro-life agenda, but the fact that they pose no threat to legal abortion makes it all the more baffling why ostensibly pro-life leaders would feel the need to stifle them. The mildest possible pro-life measure is still too controversial? Pathetic.

Second, the Milwaukee Journal Sentinel reports that Gov. Scott Walker has hired a new spokeswoman, Alleigh Marre, for his gubernatorial reelection. In 2011, Marre declared, “I’m a Republican, and I support Planned Parenthood, a woman’s right to choose, access to STD testing, birth control, etc.” Marre has also worked for pro-abortion ex-GOP Sen. Scott Brown of Massachusetts. So far there’s been no outright confirmation as to what Marre thinks about abortion today, but as the MJS’s Daniel Bice points out, statements by Team Walker have “all but confirmed Marre’s pro-choice position.”

“America is a great country where people can have differing points of view on various issues,” said Tom Evenson, Walker’s campaign communications director.

Later, Evenson supplemented that statement with this: “Governor Walker welcomes people with differing opinions in his campaign and his administration. Throughout his career he has always been pro-life and supports policies that honor the sanctity of life.”

That’s not good enough for the state’s pro-life leaders; Pro-Life Wisconsin legislative director Matt Sande says this is “obviously” a problem and Marre should be replaced “immediately,” because candidates and their top public representatives “should be of one mind on these core social issues.” Wisconsin Right to Life executive director Barbara Lyons points out that the views of such a key official are far more significant than they would be if we were talking about some low-level employee.

But on Right Wisconsin, Milwaukee radio host Charlie Sykes defends the governor as a leader with a strong pro-life record who is simply refusing to force “ideological conformity” on his staff, even suggesting that the real headline should be crediting Walker for taking a stand against “litmus tests.”

(Disclosure: I have written for RW and interned with Pro-Life Wisconsin in the past.)

Sorry, but “litmus test” aren’t dirty words. Spokespeople must be able to effectively express and defend all of their bosses’ core positions, and at a bare minimum, that effectiveness is called into question when a spokesperson doesn’t actually believe them or sincerely mean whatever he or she says in support of them. But more importantly, Marre’s hire raises a more troubling question: what if Team Walker are satisfied with Marre because they don’t plan on defending the pro-life cause much anyway?

Yes, Walker has established a strong pro-life record over his career. But in all the discussion of his potential presidential run, there’s an elephant in the room too few pundits want to acknowledge: the Wisconsin recall saga seems to have changed him…for the worse.

Back in November we discussed his January 2013 declaration that he didn’t want the legislature sending him hot-button legislation likely to re-flood Madison with ravenous left-wing protestors, as well as his professed disinterest in the pro-life bills that GOP Senate leaders abandoned. And a month earlier, I wrote on Patriot Update that Walker was displaying this pattern across multiple issues.

Further, in an August 2012 interview with Democracy Now’s Amy Goodman, Walker responded to abortion questions not by standing up for basic pre-born rights, but by downplaying the issue’s importance:

The women I talk to in my state never talk about that issue. They overwhelmingly talk to me about the fears they have about their children and the ideas that their children someday might not have a job or an opportunity. That’s not an issue to—the issue that the media obsesses with, it’s not an issue that voters talk about […] It is an issue that the media wants to talk about, because they want to give Barack Obama a pass from the abysmal failure—42 consecutive months of unemployment above 8 percent, 12 million Americans unemployed. We should be talking about that, because that’s what’s at stake in this election.

Yeah, let’s stop “obsessing” over a million deaths a year. Innocent lives weren’t “at stake in this election.”

Indeed, when Sykes quotes Walker on Thursday as defending his pro-life credentials – “Bottom line: I am pro-life. I have a strong record and will continue to be strong when it comes to protecting life.” – that’s the first time in ages I can remember Walker actually expressing any such strength…when it was politically advantageous to do so.

That’s what’s so unsettling about all this: hiring pro-abortion surrogates and sending pro-life bills and questions to the back of the bus all leave the distinct impression that Wisconsin’s ostensibly pro-life leaders in the legislature and governor’s mansion think of abortion as just one policy issue out of many equally important matters – not a matter of life and death, not the defining humanitarian crisis and civil rights abomination of our lifetimes, not the monstrous shedding of innocent blood that calls out to our consciences for justice and mercy.

Pro-life Wisconsinites have placed a lot of patience and faith in these people. If that’s what they really believe, it’s well past time they just say so and stop stringing us along.