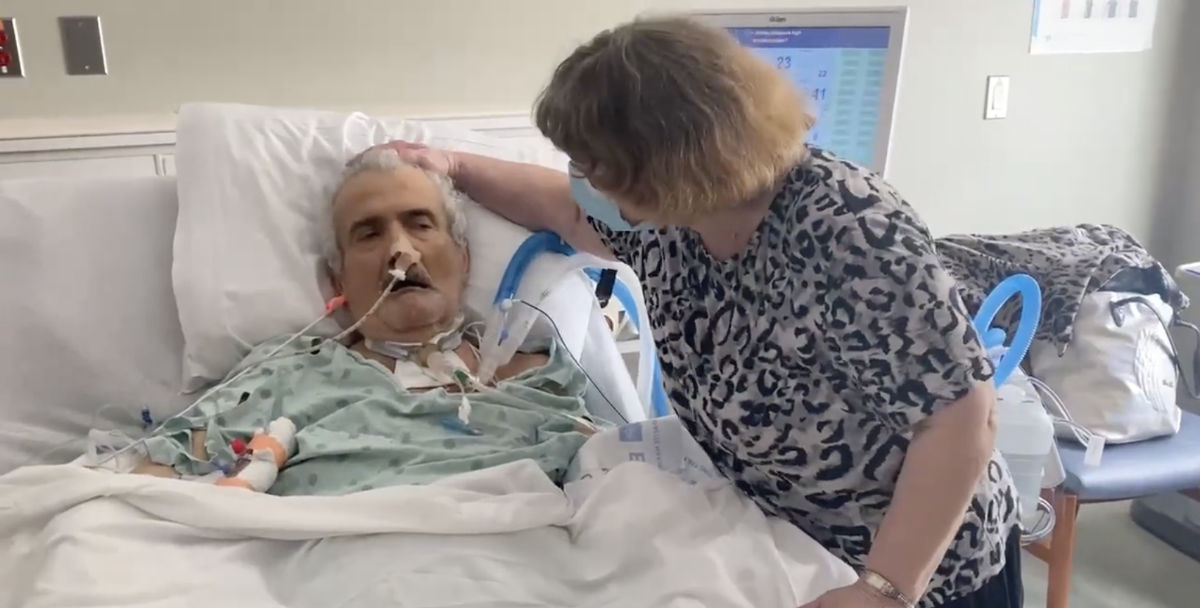 UPDATE 6/3/2021: Bill Costea, whose wife Eugenia was given just 10 days to find him a new medical facility, died of natural causes over the weekend, according to Texas Right to Life. He had been hospitalized for heart complications in April, and then in May, Baylor Scott and White hospital imposed Texas’ controversial and unethical 10-Day Rule, telling his wife they would remove life support in just 10 days. The deadline to find a different hospital to care for him was set for June 4.

“Instead of allowing Eugenia the space and peace to be with her husband in his final days, the hospital imposed the 10-Day Rule, forcing Eugenia to seek legal help and spend her time arguing with hospital ethics committees,” said Texas Right to Life.

The couple’s attorney, Emily Cook, said, “When a group of random men and women can strip away a wife’s medical decision-making power, with no findings from a court of law that she is incapable of exercising that authority, such a law clearly violates both hers and Bill’s due process rights. Bill wanted his wife to make his medical decisions, that’s why he executed a medical power of attorney. Texans are rightly alarmed that hospitals and physicians allegedly have this power.”

5/28/2021: A hospital in Texas has enacted the state’s controversial 10-Day Rule in the case of a man who is awake, responsive, and reports no pain. Under the rule, a hospital can withdraw life support from a patient if that patient’s family cannot find another facility to transport the patient to within 10 days. In this case, the hospital has stated it will also remove food and water from the patient.

According to Texas Right to Life, on Tuesday, Eugenia Costea was informed by Baylor Scott & White Hospital in Temple, Texas, that it will remove treatments from her husband Bill if she doesn’t find a new facility to take him within 10 days. Bill, though currently on a ventilator, is awake, can communicate, and follows commands. The hospital, however, believes he only has weeks to live and appears to be attempting to hasten Bill’s death by removing the ventilator along with his blood pressure medication and nutrition.

“Instead of letting a grieving family grieve, the hospital is taking away Eugenia’s decision-making power and attempting to impose death on her husband,” said Texas Right to Life in a statement.

The pro-life organization added, “The hospital committee did not argue the treatment is ‘medically inappropriate,’ and the treatments they are planning to remove—his ventilator and blood pressure medication—do not harm him. In fact, removing the ventilator and blood pressure medication would prompt Bill to suffer multi-organ failure. Clearly, the goal is to hasten his death.”

Bill, described as an active and avid traveler, was hospitalized in mid-April 2021 with heart complications. The plan was for him to be evaluated by a heart specialist, but when it was determined that he may only have a short time to live, the hospital decided he was no longer worthy of being provided with care.

“I love my husband,” says Eugenia. “Together we have endured so much. I will fight for his life; I know he would do the same for me.”

The couple’s attorney, Emily Cook, said a committee enacted the 10-Day-Rule without even speaking to doctors first.

“Astoundingly, the doctors who treated Bill and who called for the meeting did not even show up,” explained Cook. “The committee made a decision without even hearing from Bill’s physicians, nor was Eugenia and her attorney given the opportunity to hear directly from the physicians and ask questions.  The ‘medical case’ was a brief 12 minute recap by the ethics chair. What exact treatments that were eligible to be withdrawn, no one could give us a concrete answer.  Food and water was not even discussed during the meeting, so imagine our surprise when Eugenia’s ten day letter included food and water to be stopped.”

Relocating a critically ill patient with high medical needs in a 10-day time frame is an extremely difficult task. Eugenia would have to find a location, get insurance to approve it, secure the medical transport, and make it all happen in just a week and a half.

Without legal intervention, the hospital will take the steps to end Bill’s life on June 4. Texas Right to Life is asking that anyone who wishes to help call Baylor Scott & White – Temple at (254) 724-2111 to ask them to reconsider their decision.