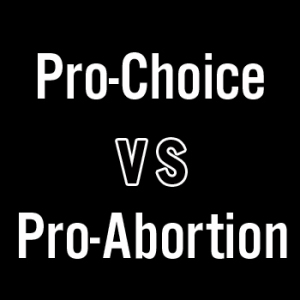 At the risk of stating the obvious, if her organization is correct that abortion is a perfectly normal, wholesome, and vital part of women’s medical care, then who cares about its frequency? Why should Planned Parenthood (pretend to) make abortion’s rarity a priority?

Initially the line was that even though abortion was morally acceptable, it was still “difficult” or “tragic.” But abortiophiles eventually realized they couldn’t specify just what was “tragic” about ending your son or daughter’s life without casting doubt on its permissibility, so out it went.

Their updated line now seems to be purely utilitarian. There’s absolutely no reason whatsoever why anyone should think abortion is the teensiest bit immoral. Oh no. It’s just that they can cost women a lot of money and be medically complex, so isn’t it better for the patient to not have to worry about that in the first place?

Well, sure. But you can say the same thing about any number of medical procedures. Yet you never see a politician or activist go out of their way to declare the need to reduce, say, the nation’s root canal rate.

Speaking of which, there’s another mark against Team Abortion’s sincerity. When parents, doctors, or teachers do talk about preventing the need for root canals, or any other onerous correction to something that was within the patient’s control, they’re not shy about stressing the behavioral aspects of prevention. But when it comes to sex, it’s “slut-shaming” to point out that there’s a simple, proven method to preventing unwanted pregnancy that every woman in America has full access to for the low price of free. If they really did “plan to keep that trend going,” they wouldn’t make abstinence such a dirty word.

And wouldn’t people who really wanted abortion to be less common be willing to at least consider some measures that discouraged them without outright prohibiting them? They would, but prenatal execution apologists in the real world are not. Consider Molly Redden’s handwringing at Mother Jones about a proposed law in Missouri to impose a 72-hour waiting period on abortion, which she hysterically calls “one of the harshest abortion laws in the country.” Making people wait a few days before making such a monstrous, irreversible decision regarding another human live is about as soft as it gets—how “harsh” a restriction would it be to let people steal, but only if they’ve waited three days after their request for whatever they wanted to steal was turned down?

Nobody who really meant what Ms. Stoesz wrote would recoil in disgust at such simple, non-coercive measures as making people wait a bit longer to stress the importance of rethinking their decision, or of simply showing them what the thing they’re destroying actually looks like. No, those are the instinctive reactions of people who don’t want abortion to be rare, because it benefits them ideologically, sexually, and, in Planned Parenthood’s case, monetarily. Their words may say they dislike it, but their actions say they’re in love.