Never has the emptiness of the “War on Women” theme been clearer.

Well, it turns out that’s anti-woman, too. LifeNews reports that several congressional Democrats have taken the incredible position that respect for women requires tolerating prenatal gendercide:

“It limits a woman’s right to choose and jeopardizes her access to safe, legal medical care,” he claimed.

Conyers, ranking member on the House Judiciary Committee, went as far as fighting GOP attempts to name the bill after Susan B. Anthony to honor women.

Jarrold Nadler, of New York, said the ban on sex-selection abortions is the “latest tactic in the War on Women.” Rep. Hank Johnson said the bill was part of the “Republican War on Women.” And Barbara Lee of California went as far as claiming that women would reset to back alley abortions if they couldn’t obtain a sex-selection abortion like the ones the bill would ban. 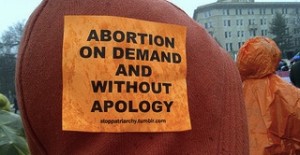 The White House has announced that President Barack Obama also opposes the bill.

On one level, this should be the final nail in the coffin for the idea that legal abortion was ever a pro-woman position. If terms like gender equality, feminism, and women’s rights don’t at the very least mean that you have the right not to be killed simply for being female, then they mean absolutely nothing. There can be no more egregious form of gender discrimination than killing a helpless, defenseless child who has committed no crime other than possessing the wrong chromosomes.

Having to buy your own birth control, thinking hard about parenthood before having sex, not being able to have your daughter killed…these don’t even begin to compare. This is the perversity of what modern liberalism has done to feminism: completely exchanging real goods like equal rights and dignity for phony “rights” that are superficial at best and destructive at worst – and not just to babies, but to mothers as well.

On another level, however, there is a necessary consistency to the Democrats’ position. If unborn babies aren’t people, if they’re really just subhuman body parts over which women have absolute dominion, then how can any reason for disposing of them be less tolerable than any other? Indeed, how can the ardent pro-abort afford to support gender-discrimination protection for fetuses when the mere admission that fetuses can be identified as male or female punctures the fantasy that they aren’t human?

Never has the emptiness of the “War on Women” theme been clearer. Pro-choicers exploit both sexism and fear of sexism for political gain, but their ideological commitment to abortion means they simply can’t be there for women’s actual rights when they’re needed most.