Instead of trying to mend abortion, let’s end it.

We need to firmly and clearly reject post-viability abortions except in extreme cases. … Abortions in the second trimester, especially after 20 weeks, need to be considered differently from those that happen early in pregnancy.

In 2011, Frances Kissling, the founding President of the National Abortion Federation, penned a Washington Post editorial supporting the very abortion regulations that many pro-life groups are celebrating today. Kissling defended such regulations saying:

If the choice movement does not change, control of policy on abortion will remain in the hands of those who want it criminalized. If we don’t suggest sensible balanced legislation and regulation of abortion, we will be left with far more draconian policies – and, eventually, no choices at all.

Did you hear that? Unless abortion-advocates advocate for “common-sense” regulations of their murderous industry, abortion will not survive. Kissling’s argument makes sense, when viewed from an international perspective. European countries are known for their broad access to legal abortion. Few have the vibrant pro-life base America does. Indeed, many European countries have tiny or slumberous pro-life contingents seeking to ban abortion entirely. 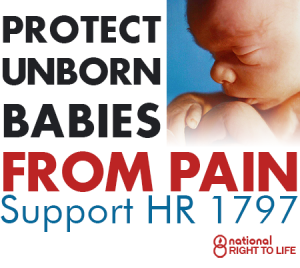 Shouldn’t we be protecting them from murder?

When a dozen Swedish reporters visited Denver in 2008 to report on the total abortion ban under consideration, they suggested that “America would not have so much opposition to abortion if the procedure were more humane and regulated as it is in Europe.”

You see, abortion-tolerant Europeans view the American abortion business as barbarous. In most European countries, abortions are only ever performed in the first trimester (except in cases of rape, incest, “fetal abnormality,” or threat to the mother’s health). The Swedish journalists were shocked that America allows butchers like Colorado’s Dr. Warren Hern to kill babies just days away from delivery.

But that’s precisely the point. Late-term abortions are visually shocking. They are obviously barbarous. And they are just as deadly as the more subtle abortion in the first trimester. By banning late-term or partial-birth abortions, the pro-life movement simultaneously robs itself of its most grippingly obvious visual argument against abortion and subdues public outrage against the most common kind of abortion – that is, first trimester abortion. Abortion is protected with a veneer of legitimacy since it only kills a fetus in early development, a fetus which cannot feel pain and doesn’t appear to be all that human.

The problem with so-called “fetal pain” legislation is that it obscures the real issue: the personhood of the unborn child from the moment of fertilization. Instead, it teaches that abortion is bad because it’s painful. It then prescribes a remedy by allowing only abortions that are not painful for the baby, as if that is a panacea. Some “pro-life” lawmakers have even gone so far as to propose abortion anesthesia for the baby! 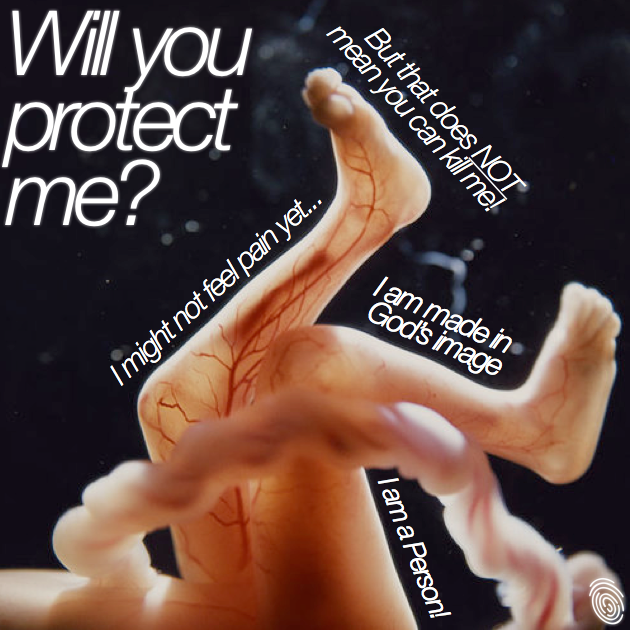 I may not feel pain yet…but I still deserve to be protected.

The proposed fetal pain legislation before Congress also makes exceptions for babies conceived in rape or incest. This exemption is unprincipled even on its own terms: don’t pre-born children conceived in rape feel agony just as painfully as any other? Rebecca Kiessling (not to be confused with Kissling) artfully points out the internal contradictions and regressive nature of such a “pro-life” position. Georgia Right to Life rightly opposed the bill for this very reason. This is a pro-choice bill, with exceptions.

I’m willing to admit that this legislation could save some lives if enacted (though, from experience with similar legislation, others suggest that it will not). Will you, my reader, be willing to admit that fetal pain legislation may actually encourage some mothers to have early-term abortions because they believe it to be humane – because they’ve been taught that their babies won’t suffer or feel pain before 20 weeks?

Instead of spending years and millions of dollars pushing this shortsighted bill through Congress, let’s get back to our mission: abolishing abortion. Perhaps that time and money would be better spent supporting something like Rand Paul’s “Life at Conception” act or a total moratorium on funding to abortion providers (without Hyde exceptions for rape and incest).

If we intend to convince legislators to end abortion, we must hold them to a higher standard. We must not be placated with bills riddled with the bodies of “exceptions”; we must play harder to get. If we intend to educate the public about the humanity of the unborn child, we cannot raise an inconsistent standard that OKs the killing of some unborn children (those conceived in rape or incest, those prior to 20 weeks, those who cannot feel pain, etc.). That will be rejected as a defense of all unborn human life, as it was in Roe v. Wade. It will be welcomed by abortion-advocates like Francis Kissling who know that sanitizing abortion is the key to keeping abortion legal. The public will, however, follow a principled standard, so let’s work together to advance one. Instead of trying to mend abortion, let’s end it.

Editor’s Note: This article is the opinion of the author, not the official position of Live Action on H.R. 1797.