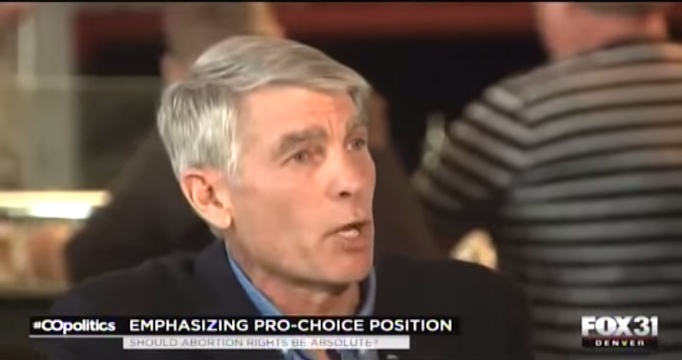 The thought of a baby’s arms and legs being pulled off isn’t too pleasant. Neither is aborting a little girl simply because she’s female. That’s probably why most pro-abortion politicians tread carefully around these issues. Not Senator Mark Udall: the Colorado Democrat recently made clear that when it comes to late term abortion and gendercide, he’s not too concerned.

By the end of the first trimester, a fetus is too big to be killed via vacuum aspiration. Instead, he or she has to be dismembered with a set of forceps in a procedure known as dilation and evacuation (D&E). That gets even more disturbing when you see the research conducted by Dr. Kawaljeet Anand at the University of Tennessee. His work suggests that a fetus can feel pain at just 20 weeks of development.

Of course, things don’t always go smoothly. In 2012, Live Action volunteers went undercover with hidden cameras to five late-term abortion facilities. In each case, the volunteer said that she was considering an abortion and asked what would happen if her child inadvertently came out alive. At all five clinics, the volunteer was promised that if this occurred, her baby wouldn’t be allowed to survive. A staff member in New York City stated that the infant would be drowned, while Dr. Cesare Santangelo in Washington, DC told a volunteer that he doesn’t render assistance to surviving newborns, explaining that “it’s happened before.”

Why would an abortion be performed at this stage? Well, in some parts of Asia, it’s often done because a woman is carrying a girl instead of a boy. This isn’t just an Asian problem, however, as the Canadian Medical Association Journal has reported that Canada has become “a haven” for those seeking sex selective abortions. The issue has come up in America as well, with Arizona becoming the first state to outlaw gendercide in 2011. This is a move that even some normally pro-abortion activists support.

Mr. Udall isn’t among them. During an interview with reporter Eli Stokols, Udall was asked, “So you believe in a woman’s absolute right to make her own health care decisions, even if sometimes that includes late-term or sex-selective abortions?” The Senate Democrat responded with, “Look, we should trust the woman and her family and her religious counselors and the people she wants to help her make that decision.” The possibility that a woman might be coerced into an abortion by her family or religious counselors seems to have not occurred to him.

While the topic may not have  been on Sen. Udall’s mind, pro-lifers should do their best to keep talking about it. They can also sign Live Action’s petition calling for an investigation of the late term abortion industry . Finally, we can let women who become unexpectedly pregnant know about sites like  ParentProfiles.com and Adoptimist.com–places where they can find supportive couples who are eager to welcome new children into their lives.

Polls show most people support limitations on late-term abortion, while an overwhelming majority believe that targeting baby girls for abortion should have no place in this country. Americans want to see a line drawn on these issue. Unfortunately Sen. Udall just isn’t up to the job.