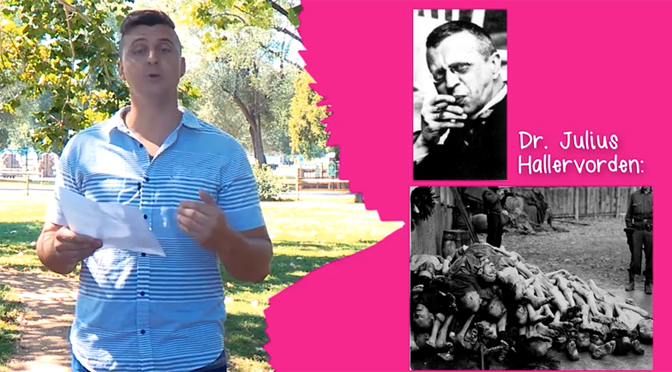 At the end of  World War II, American soldiers walked German civilians through the death camps in order to help them wake up to the reality that Jews were systematically killed. The public’s imagination had to be shocked awake through deliberate uncovering of evidence that the Holocaust happened right there in their midst. Today, due diligence must likewise awaken the American conscience from the lull of the abortion status quo where power and privilege reside.

David Daleiden and the Center for Medical Progress are currently escorting the American public through the the back rooms of Planned Parenthood’s abortion facilities in order to inspect the hidden holocaust. To those with a sense of history, the parallels are too uncanny for comfort.

Enter the recent video from LifeSiteNews titled, “The awesomest ‘pro-choice’ defense of Planned Parenthood… ever.” The video portrays the average American’s support of Planned Parenthood, shaped by the popular culture in a way that speaks to the very nature of our national identity–that American spirit open both to feminist sloganizing and open to welcoming the poor, weak, huddled masses yearning to breathe free. The actor, who is seen trying to maintain support for Planned Parenthood, captures America’s big-hearted earnestness perfectly – he trusts what is billed as reproductive health and believes our country offers sufficient protections to prevent any sort of creeping Nazi eugenics in our land of the free.

The actor’s think-aloud narrative posits a plausible line of reasoning of those who stand by Planned Parenthood even in the face of the revelations that this most trusted of American institutions sells human body parts. Much of the actor’s narrative repeats reassurances about the advancement of science as well as reliance on our American safeguards, including scientific standards, legal frameworks, and freedom of the press.

With a we-can-land-men-on-the-moon kind of enthusiasm, Americans believe in our doctors. A white lab coat signals credibility, unquestioned authority,  the highest legitimacy. Doctors are never tempted by political alliances or motivated by greed, right?

Such all- out confidence in science is seen in a response to a Murray Vassar cartoon. The reader reveals blind faith in medical practitioners. Vassar’s cartoon specifically questions the abortion apologist’s major justification – bodily autonomy – in light of the organ procurement specialist’s instructions to the technician to carve open the baby’s autonomous body for research.

Here’s the reader’s response with a pro-life perspective inserted in bold type in brackets:

You’re talking about a non sentient [Actually pain capable] embryo/fetus & dishonestly representing a legitimate [Legitimate no– legal, yes, but under contention ever since legalized] medical procedures (D&C or D&E abortion) in which women have chosen to donate the embryonic/fetal tissue to science & medical research [In many cases, as the CMP video reveals, without their consent and certainly without full knowledge of how organs might be “procured”] to find cures [No cures have occurred using fetal organs despite Cecile Richards claim for “lifesaving medical research, research that is developing cures for Parkinson’s and for Alzheimer’s, even the Ebola vaccine].

This comment epitomizes the party line exalting science with the same confidence as Nazi propaganda films that claimed sanitized death was a cure for mental illness. At each moment of recognition, the actor looks askance, and in a startled epiphany recognizes the quote highlighted in pink is not in fact from a Planned Parenthood representative but from  Dr. Julius Hallervorden, a German neuroscientist  who accepted the brains of mentally ill patients, without question. Although no one is calling Planned Parenthood supporters Nazis, deeming the procurement of human organs for research as an un-problematic societal good strikingly echoes Nazi ideology. History repeats. The actor responds to the CMP revelations and is heard mentally sorting out the evidence – trying to justify the increasing nausea he experiences from such reflections.  Nausea in the face of depravity suggests a conscience capable of registering the horror. Yet, with the callous disregard of someone whose own humanity is diminished, the actor dismisses his own squeamishness by reflecting that even doctors are repulsed by the gross surgical procedures.

Looking again, the actor pauses, troubled by the fact that Nazi doctors made the same claim. The CMP reveals a similar mindset when tissue procurement Stem Express CEO  Cate Dyer jokes about the nausea research assistants experience on receiving their shipments. Watching the CMP videos and reflecting on the implications of tiny stacked human corpses is a necessary act of due diligence in this age of fetal organ “procurement.”

Abortion, as its supporters remind us, is perfectly legal. And guess what? Everything Dr. Hallervorden did in Germany during the Holocaust was perfectly legal. Law, it becomes clear, yields to the powers wielding it. Instead of protecting those who cannot defend themselves, America’s legal system has been manipulated to block the CMP videos. Still, there is increasing awareness of the crimes committed in relation to the trafficking in baby body parts.

As Andrea Mrozek notes, “When we use baby body parts and express a callous disregard for that life and those parts then we have indeed entered criminal, and yes, I’d argue, Nazi territory. ”

Freedom of the Press Guards The Powerless, Right?

Often accorded the lofty role of safeguarding our republic,  the free press was once widely held up as protection against the greedy clutch of capitalism. Yet, the recent revelations by citizen journalists at the CMP led John Jalsevac to reflect:

Who can listen to the New York Times quoted approvingly on Planned Parenthood’s Facebook page that fetal tissue is a “precious resource” that ought to be “utilized” without hearing echoes of Dr. Hallervorden’s statements that those brains he received contained ‘wonderful material’?

Due diligence is needed to wake up to the realities of back room organ harvesting of autonomous aborted babies. Wake up, America, to the reality of Planned Parenthood  cutting open the face of a fully formed human fetus whose heart is still beating in order – in perfect symmetry with the Holocaust past – to harvest a human brain.

The larger frame of history opens our vantage point to observe the reality seen in the CMP videos. The Holocaust provides a historical lens (to penetrate the pink washing of “scientific advancement,” “women’s healthcare”) –  the rose-colored sunglasses that are now standard equipment for every card carrying pro-abortion politician benefitting from Planned Parenthood Action funds. Pro-abortion leadership has repeatedly expressed an unwillingness to view the CMP evidence, despite forensic analysis showing no video tampering.

The rest of us, however, still have eyes to see and voices to call others to due diligence.