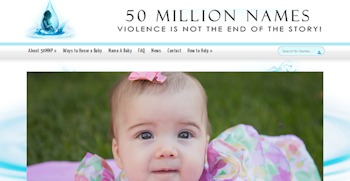 With a death toll of somewhere around 2 million American lives lost in wars, we mourn the lives cut short and honor those who gave the ultimate gift for the freedom of our country. We celebrate their homecoming if there is one, and if there is not we surround their families with love and honor the memory of a life lived for others. We list their names on memorials and remember them in our prayers.

But it’s a completely different story with abortion.

That’s just what Charlotte Ostermann set out to do with her project 50 Million Names.

The 50 Million Names project was born after Charlotte discovered the healing power of giving her own son Timothy (who died before birth) a name. Now she’s launched a campaign to share the dignity, healing power, and blessing of giving all the children lost to abortion a name. All it takes is to sign up on their website, and hit “name a baby“. Then they ask for a first and middle name, and some sort of action on your part to memorialize this person. Charlotte has all sorts of ideas for what these gestures could be:

The possibilities are endless, and just think: the simple action of giving these children a name  and honoring them in some way shows the world just how much we believe in the humanity of each human person. You can do one of the things listed, or come up with your own!

On my college campus we had a pro-life movie night and before it each named a baby, said a rosary for them, and wrote them a letter telling them how much they are loved. We put the letters together in a binder that is now available for anyone to look at in our student center. It’s quite a witness to the beauty of these children’s lives.

These babies don’t have a long wall memorializing each one of them by name, but they have you – someone who believes they were a unique an unrepeatable person. Help honor each one of them by visiting 50 Million Names and giving the babies we’ve lost the dignity of a name.