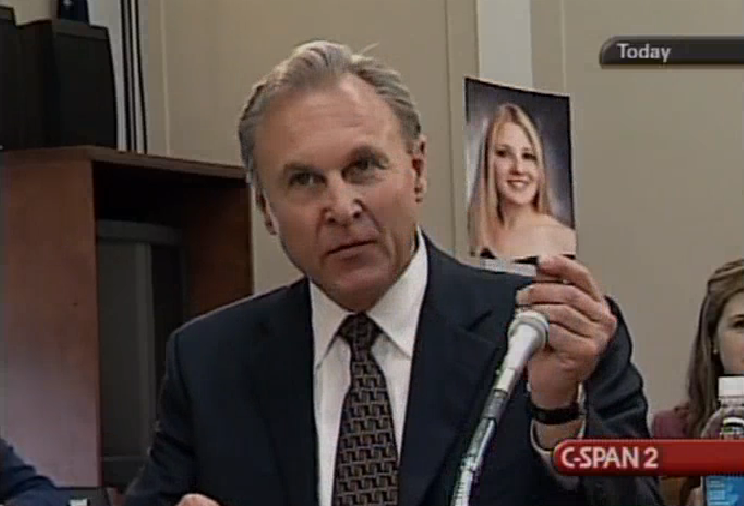 (Pregnancy Help News) The father of a young woman lost to chemical abortion spoke out about the needless loss of his daughter and the dangers of the abortion pill after her tragic death years ago.

Monty Patterson’s heart-wrenching account of his daughter Holly’s death is even more pertinent today with the rise in chemical abortion and simultaneous reduction in regulation of dangerous chemical abortion pills.

“Not a day goes by that I do not recall her brilliant blue eyes, engaging smile, laughter and sheer general beauty,” Patterson said.

He was testifying before the U.S. House Subcommittee on Criminal Justice, Drug Policy, and Human Resources of the Committee on Government Reform in May 2006.

“Holly’s personal drive and unwavering determination continue to inspire me and give me strength to pursue these critical issues in her name,” Monty Patterson stated. “It’s a natural instinct to protect our loved ones and speak for those who cannot speak for themselves.”

Holly had been given an alternative non-FDA-approved regimen of chemical abortion at Planned Parenthood.

Her father advocated for awareness about the abortion pill following her death, including creating a website about the risks posed by abortion drugs.

Video clips from Monty Patterson’s May 2006 testimony about Holly and the abortion pill were recently tweeted by pro-life group Live Action.

“There are no quick fixes or magical pills to make an unplanned pregnancy go away,” Patterson stated.

“My family, friends and community were deeply saddened and are forever marred by Holly’s preventable and tragic death,” he said. “It is my vibrant memory of Holly and her premature death that have inspired me to make the public aware of the serious and lethal effects of the RU-486 regimen.”

Patterson recounted with some emotion how the events around his daughter losing her life to chemical abortion unfolded.

“Twelve days after Holly’s 18th birthday on September 10, 2003, she walked into a Planned Parenthood clinic to be administered an RU-486 medical abortion regimen,” Patterson said.

“By the fourth day she was admitted to the emergency room of a local hospital,” he said. “She was examined. She was given painkillers. She complained of bleeding, cramping, constipation and pain. But subsequently she was sent home.”

“Hours later I was called to the hospital where I found her surrounded by doctors and nurses, barely conscious and struggling to breathe,” he said.

“Holly was so weak she could barely hold onto my hand,” said Monty Patterson. “Feeling utter disbelief and desperation, I watched Holly succumb to a massive bacterial infection as a result of a drug-induced abortion with RU-486.”

Patterson detailed how he spent thousands of hours researching medical and scientific journals, talking to doctors, legislators, state and federal agencies, to learn about the drug RU-486.

Chemical abortion, or RU-486, also known as Mifeprex or mifepristone, is a two-pill process. The first pill stops the mother’s womb from building up Progesterone, the necessary hormone for a pregnancy to thrive. The second pill, taken one to two days later, causes the uterus to contract and deliver the deceased fetus.

Chemical abortions, also known as medical or medication abortions, are on the rise and poised to outnumber surgical abortions, now accounting for 40% of all abortions performed in the U.S. The abortion lobby has pushed for greater access to the abortion pill for some time and used the coronavirus pandemic to press for less regulation of the drugs.

“I believe that RU-486 is the substantial contributing factor responsible for Holly’s death,” Monty Patterson told the House Subcommittee in 2006.

“Currently there have been eight deaths reported by the FDA linked with the drug,” he said, ‘furthermore there are 900 or more serious health consequences associated with RU-486.”

“How many must die needlessly before this drug is removed from the market?” he asked at the time. “Women have been and are still relying upon what they think is truthful information concerning the limited risk involved with a medical abortion.”

“Yet does the average patient, a teenager like Holly, understand she may be risking her life taking RU-486,” he continued, “when she’s repeatedly exposed to statements like, “It’s what women have wanted for years,” “It’s the first FDA-approved pill, providing women with a safe and active non-surgical option for ending early pregnancy”?”

READ: Planned Parenthood has offered the abortion pill in defiance of safety guidelines for years

As of the end of 2018, there had been 24 reported deaths of women in the United States associated with abortion pills. The FDA has also documented at least 4,000 cases of serious adverse events related to the abortion pill, including more than 1,000 women who required hospitalization.

While chemical abortion was being pushed via webcam in the state of Iowa, Iowans for LIFE’s Board President Tom Quiner had written an essay about the issue in the Des Moines Register, which prompted Monty Patterson to write him about the risks.

“Medical abortion can be a very dangerous procedure,” he told Quiner in 2013. “I know firsthand, I held Holly’s hand as she fought for her life but eventually succumbed to a horrible and painful death.”

“My concern is not about the abortion debate but women’s health,” Patterson had said.

The health, safety and welfare of women should never be compromised in the name of women’s rights to access abortion, Patterson had written, stating, “women need to completely understand the health consequences of this drug regimen to properly make an informed decision that is in their own best interest.”

LAN Editor’s Note: This article was published at Pregnancy Help News and is reprinted with permission. Visit AbortionPillReversal.com for information on abortion pill reversal.