Maybe it’s time for people to start taking us seriously.

As a pro-life activist, sometimes I get discouraged. With every day that passes, 3,300 innocent lives are snuffed out in abortion clinics across our country, and I am acutely aware that I am living in the midst of our own American holocaust. While the pro-life movement has been gaining momentum in recent years, and 2011 produced a record number of pro-life laws, at the end of each day I am still living in a country where aborting a full-term unborn child up until the moment of birth is nationally sanctioned. Sometimes I feel like the odds are stacked against us, and we are overwhelmingly outnumbered by our opposition.

But then there are days when I am reminded that the pro-life movement is far stronger than we realize. There are moments when a surprising display of public support for pro-life values fills me with hope. One of those displays occurred last week.

A long stretch of gray sidewalk extended alongside a busy intersection next to a crowded mall on a Saturday afternoon. Twenty-five young people from Live Action San Diego, a youth-led pro-life organization, were stationed intermittently on the sidewalk holding signs with pro-life facts and phrases and pictures of fetal development. We were prepared for the worst. We anticipated receiving hateful accusations, vulgar language, and obscene gestures. We expected our right to assemble and protest to be challenged by local authorities. We were ready to be the courageous minority standing up to the powerful majority and defending the innocent children of America. 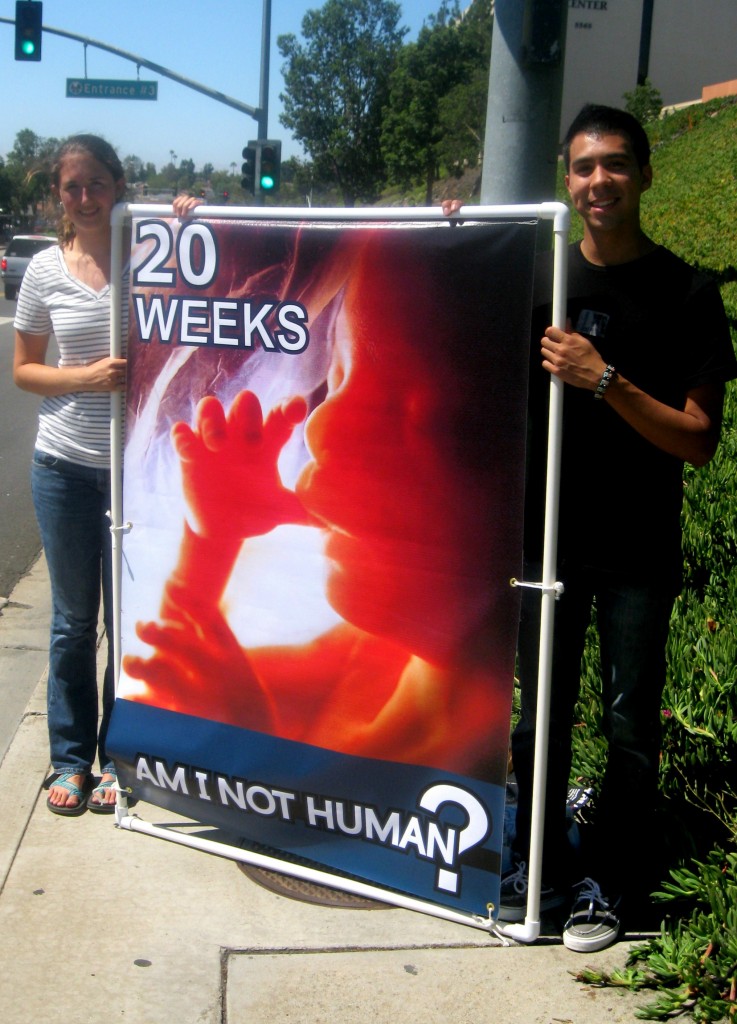 It didn’t happen – the opposition, that is. For nearly two hours, we received a steady stream of encouraging honks, enthusiastic waves, and emphatic thumbs-up from passing cars. Multiple people stopped, parked nearby, and walked over to come thank us for our demonstration and encourage us to continue fighting for the unborn. We were told, “Thank you for reminding us of the importance of being pro-life!” and “I love what you guys are doing!” Yes, not everyone responded positively to our message. Dissenters will always exist, and yesterday was no different. But for every scowling face behind the car windshield, we received five friendly honks of approval. The silence left by drivers refusing to acknowledge our presence and coolly staring at the road ahead as they passed was soon broken by shouts of encouragement from another passing car. All in all, the response our demonstration received was overwhelmingly positive.

When observing the political fight over abortion in the U.S. from an outside perspective, it appears that the pro-choice side is winning. Our president holds an extremist pro-choice ideology (President Obama has shown his support for both partial-birth abortions and infanticide by voting against the Born Alive Infant Protection Act in 2002 and against the Partial Birth Abortion Ban in 2003, both of which passed.), and organizations from the abortion industry like Planned Parenthood hold a prominent position of influence in our society. Abortion proponents are promoting a more extreme ideology, posting pictures with signs declaring, “Abortion is AWESOME” and “I choose life. MINE.”

While the American media continues to focus our nation’s attention on the outspoken pro-choice advocates in power, the pro-life movement is largely ignored and rarely considered a legitimate threat. I like to think of us pro-lifers as the underdogs. We are the competitors everyone discredits with a nonchalant laugh and a shrug, assured as they all are that we have little chance of winning. But while they ignore us, we are quietly growing in magnitude and strength. I long for the day when abortion will be outlawed in our country. And I believe that that day is coming much sooner than our opposition might think.

We are the underdogs. And they should start taking us seriously.