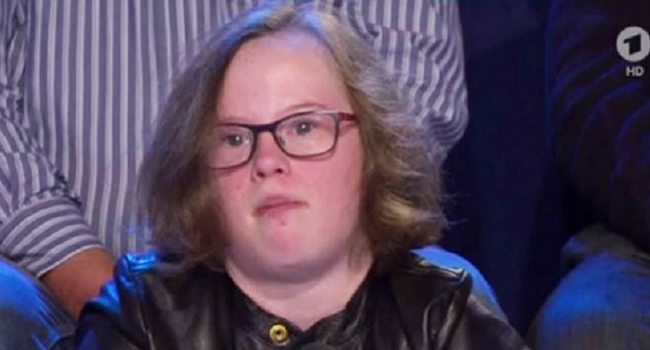 (Faithwire) — Iceland is on a mission to “eradicate” Down syndrome by aborting virtually all who are diagnosed in utero with the genetic disorder, but it’s not the only nation where such a diagnosis usually has an associated death sentence.

READ: Sick: Iceland Boasts About ‘Eradicating’ Those With Down Syndrome

Natalie Dedreux, 18, took that opportunity at a “Vote Debate” event for the upcoming general election in Germany, which could re-elect current Chancellor Angela Merkel. Dedreux fights for those with disabilities on a regular basis, as a magazine editor for those living with Down syndrome.

Merkel, who has served three terms so far, was “visibly agitated” at the question, according to reporting from Express. “Mrs. Merkel, you are a politician, you make laws. Nine out of ten babies with Down syndrome are not born in Germany,” Dedreux pointed out. “They’re going to be aborted. A baby with Down syndrome may be aborted until just a few days before birth, in what is called ‘late stage abortion.’” A diagnosis is one way in which women can get around the 12-week abortion limit in Germany.

Dedreux spoke for herself and the Down syndrome community. “My colleagues and I ask you, Mrs. Merkel, where do you stand on the subject of late stage abortion, Mrs. Merkel?” She also pointed out she doesn’t think “it’s good politically” and that “this topic is important to me. I do not want to be aborted, but to remain in the world.”

The young woman’s statement and question drew reaction the audience, as she received applause upon waiting for Merkel to answer.

Once Merkel answered the question, she provided a personal context, explaining how she grew up in East Germany where “there was no support at all, there was nothing” for families with disabled children. Merkel also took the opportunity to speak of German unification, noting “this is one of the great advantages of German unity, that today you can see now what you could do with support.”

Speaking about abortion itself, Merkel stood by her support for a “woman’s right to choose,” but also spoke of her role in having mandatory counseling for women who do undergo late-term abortions. She noted “it was unbelievably difficult to win a majority for that” and that the political debate was on a woman’s so-called right.

Tying her answer back to her personal context, Merkel offered women go through with late-term abortions for unborn children diagnosed with Down syndrome, as there is a lack of knowledge about support they may receive.

Despite her support for abortion, Merkel acknowledged that “everyone has so much potential and everyone can do something for society.” Express noted it was the first time “Merkel left her desk during the debate to get closer to Dedreux, and offered “maybe I’ll stop by” the Cologne Caritas institution where Dedreux works.

The exchange ended on a positive note, with Dedreux acknowledging Merkel’s worked for disabled people, and offering how she was a “big fan.”

Besides highlighting what was both a political but genuine interaction between a politician and her constituent, Dedreux’s powerful statement stood in contrast to Merkel’s political position. In her answer, Merkel had pointed to the politics of those who believe the abortion issue is about the “woman’s right to choose,” rather than the humanity and potential of unborn children, including those with Down syndrome.

READ: Young Man with Down Syndrome Saves Girls from Drowning

That Merkel sees “so much potential” in people like Natalie Dedreux is encouraging, as is her advocacy for mandatory counseling to make families aware of what resources they can avail themselves to. Perhaps one day she can demonstrate her consistency in acknowledging this potential by fighting even further for the life of the unborn, when she no longer regards the issue as a political one to do with a “woman’s right to choose.”

Editor’s Note: This article was first published at Faithwire on September 12, 2017, and is reprinted here with permission.