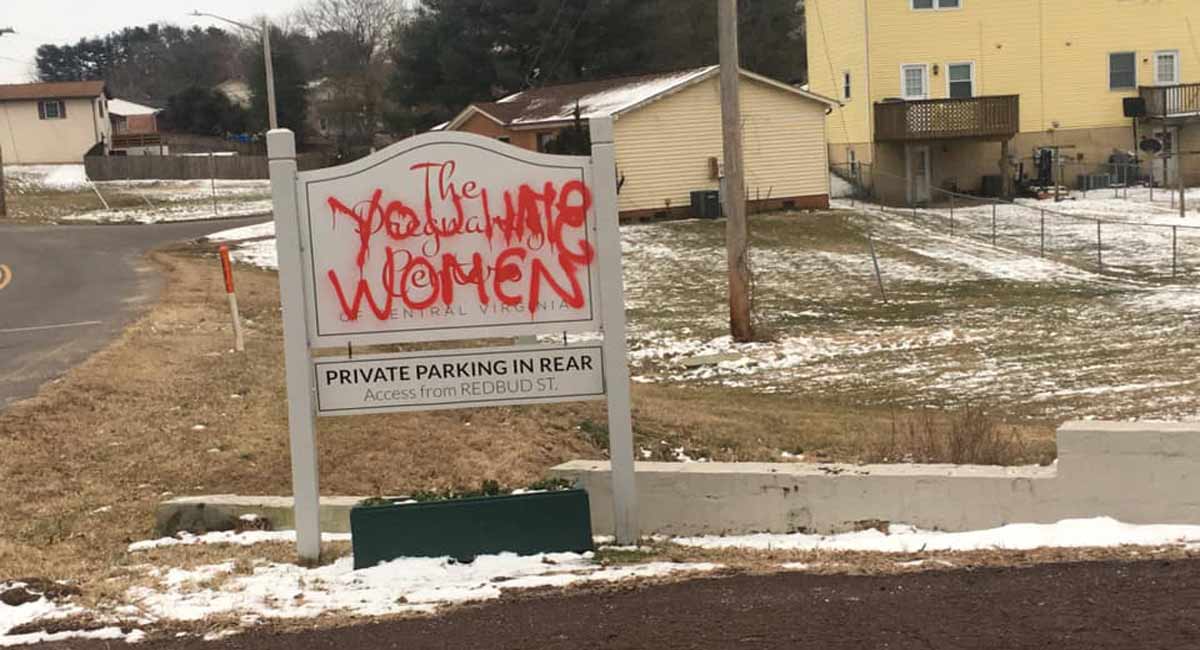 On the heels of the introduction of an extreme bill allowing abortion up to birth in the state of Virginia, a facility belonging to The Pregnancy Centers of Central Virginia in Culpeper was vandalized on Friday morning. Spray paint covered signs and the sides of buildings on the property, and a window was broken.

Lindy Dimeo, Patient Advocate Coordinator for the Pregnancy Centers, said this is the first time in two decades that this has occurred.

“I think it’s connected to what’s going on in our country,” she said Friday morning. She first learned about the vandalism on social media. The attack was called in to the Culpeper Police Department at 3:30 am Friday.

Vandals sprayed “fake,” “Jesus hates this sh$%,” and “You hate women” onto the center’s signs. Pro-abortion groups such as NARAL and Planned Parenthood have been spreading false information about pregnancy help centers over the last year or more, claiming that they lie to and shame women. In reality, the pregnancy centers provide services such as pregnancy tests and ultrasounds to women free of charge. They give them information on their legal options and if they choose to keep their baby, the Pregnancy Centers of Central Virginia provide women with free baby gear including diapers, cribs, clothing, and other supplies. Pro-life centers vastly outnumber abortion clinics, and when a woman chooses life, it takes money away from abortion clinics. In stark contrast, Planned Parenthood has been caught lying to women about fetal development and abortion risks, and aiding and abetting sex traffickers and abusers. 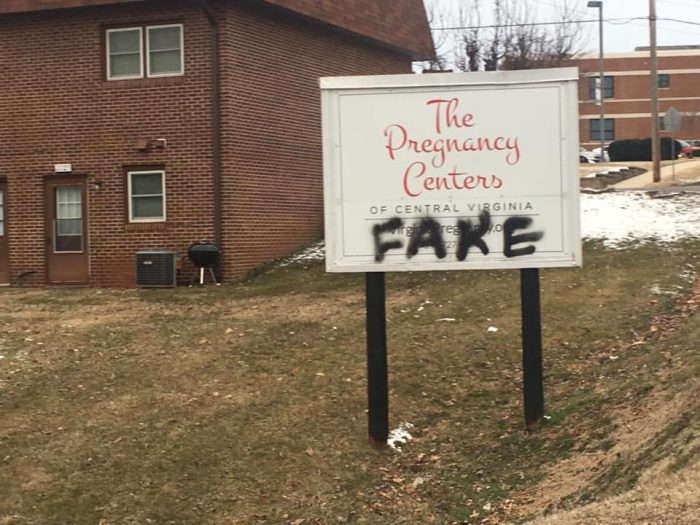 Vandalism at The Pregnancy Centers of Central Virginia. Photo via Facebook.

“We don’t tell people what to do, we just give them information,” Dimeo told the Culpeper Times.

According to Fredericksburg.com, Dimeo says the claims about them being a “fake” clinic are completely off the mark:

“It makes me sad. I’m not angry; it’s just sad because none of it is true,” Dimeo said. “We’re not a fake clinic, we have a doctor on staff; we have sonographer on staff. We do ultrasounds, STD testing, pregnancy testing.

“We’re HIPPA [sic] compliant, so we meet all regulations. We are part of a financial accountability organization. All of our services are to help women who are facing pregnancy, unplanned or not with material assistance up to 2 years old and with medically accurate information on all of their options. We are not here to tell them what to do.”

She added that the Pregnancy Center has always been supported by the community and relies solely on donations. They receive absolutely no government funding — unlike abortion industry leader Planned Parenthood, which receives more than half a billion dollars annually and aborts more than 328,000 preborn human beings annually. Volunteers have already begun pressure washing the graffiti.

“This isn’t going to stop us,” she said.

Last week, Virginia State Rep. Kathy Tran introduced a bill that would have allowed for legal even after labor has begun, causing a public outcry. The bill died in a committee hearing.