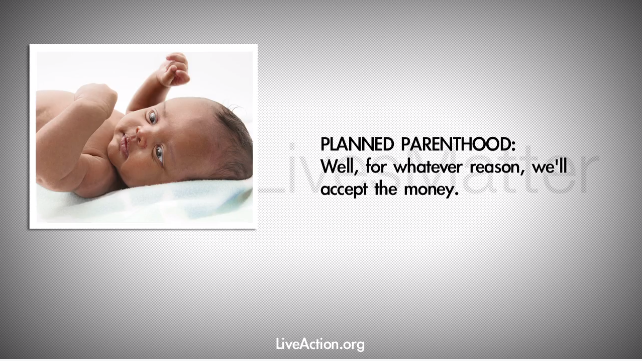 What does Planned Parenthood do when it is offered money to eliminate the number of African-Americans through abortion? Live Action’s latest investigative release probes the abortion giant and its readiness to bankroll racism inside facility walls.

Live Action’s “Planned Parenthood and Race” video reveals how the abortion giant is willing to target black lives in order to make a profit. The investigative video comes at the heels of Planned Parenthood’s condemnation of the Ferguson tragedy, and of white officers who allegedly targeted and killed unarmed African-Americans. Although Planned Parenthood claims “Black lives matter,” its documented readiness to perpetuate racism in turn for cash proves quite the contrary.

The investigator, who demonstrates a clearly racist motivation, notes the trouble he faces with affirmative action and asks if he could fund the abortions of black children. In all cases, Planned Parenthood not only accepted the donation, but said the funds could be allocated to specifically abort a black child. One staffer even noted: “For whatever reason, we’ll accept the money.”

Viewers responded in shock after seeing the undercover investigation. In comments on Facebook, they wrote: Abortion remains the greatest destroyer of black lives, ending the lives of more African-Americans than all other leading causes of death combined. While abortion is accomplishing the ultimate ambition of racism, Planned Parenthood is raking in millions of dollars from the deaths of the country’s littlest black Americans.

Planned Parenthood’s desire to profit from the targeting of blacks is grounded in the eugenic vision of its founder, Margaret Sanger, and perpetuates the human rights injustices that the Civil Rights Movement fought so hard to abolish. The abortion giant’s willingness to accept racist donations only solidifies discrimination against vulnerable minority groups that big abortion targets.

Live Action’s investigations have exposed serious abuses and cover-ups ubiquitous within Planned Parenthood, America’s largest abortion chain. Undercover videos reveal the cover up of sexual abuse, the aiding and abetting of child sex traffickers, willingness to perform infanticide and abortions based on gender and race, as well as medical misinformation and manipulation.