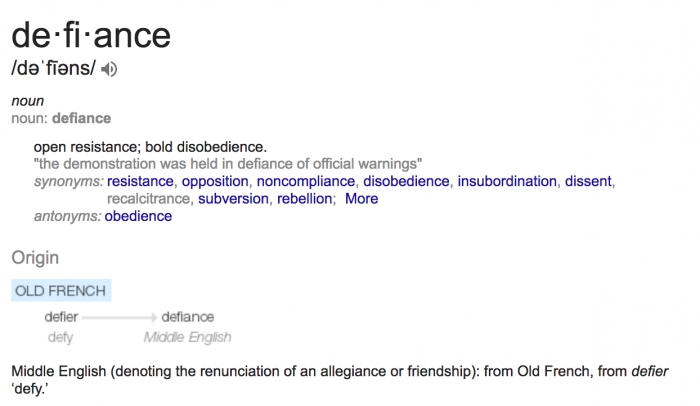 In a mailing to supporters and an announcement on the Planned Parenthood Action site, the abortion chain called on young people to join in defiance training:

Nearing 6 months of attack after attack on reproductive rights, Planned Parenthood Generation Action, in partnership with Change Corps, is excited to launch the Summer of Defiance, a four week summer fellowship program!

…As the largest, most diverse generation in American history, young people know just what’s at stake, and it has never been clearer than in this moment that young people are not going to let our country go backward –  not now, not ever.

…So this summer, Planned Parenthood, Change Corps, and about 70 young activists will train for the fight ahead. Over the course of four weeks, our fellowship program will provide activists campaign and organizing skills while working on actual campaigns such as the national fight for health care reform or passing local sex education policy. Fellows will learn through  a variety of experiences – from canvassing and phone banking to planning and building volunteer teams –  and more…. But we know the work doesn’t end this summer. Our fellows will go on to hone their skills and building programs in their communities by joining their local Planned Parenthood Generation Action group on campus;signing on to become a Defender; joining local community action teams; or seeking career opportunities in organizing.

Planned Parenthood Generation Action is a college-aged activist group that the abortion chain enlists to raise up abortion advocates to parrot the Planned Parenthood rhetoric across college campuses and local communities nationwide.

In a Changemaker video, pro-abortion senator Al Franken honors the group, saying that there are always people who come against “where we want to go as a country.” What Franken fails to acknowledge is that where he and pro-abortion activists want to go is not where the majority of this nation wants to go. While Americans are pretty evenly divided between calling themselves pro-choice or pro-life, the number of those identifying as pro-life is rising. Furthermore, as Live Action News reported last year, the majority of Americans do not want abortion on demand like Planned Parenthood fights for:

“Where we want to go as a country” is the polar opposite of where Planned Parenthood wants to take us. Even if majority, rather than morality (or basic human dignity, civil rights, or science), were the basis for deciding for or against abortion rights, the abortion industry would lose on that front as well.

Clearly, however, Planned Parenthood doesn’t care. It has made it clear that abortion is its number one priority, and it will force its agenda on the nation and on American youth, whatever it takes. Since it’s clear that the tide has turned in a way that’s about to wash the abortion giant’s profits out to sea, Planned Parenthood is rallying in defiance. Its message has a troubling undertone, implying “we’ll do whatever it takes, even if the country says we can’t.”

Making no bones about its agenda, Planned Parenthood is now recruiting young people and teaching them defiance is right when it’s focused on taking the lives of preborn babies — one of the most vulnerable people groups in America today.

There is no honor in defiantly claiming a “right” to extinguish the life of an innocent human being. Defiance in support of abortion isn’t social justice or righteousness. “Abortion” needs to stop being a term that’s thrown around, and instead, a violent procedure we recognize for what it is. How many young Americans — or people of any age — would watch the video below and be shocked by how a doctor and former abortionist describes the most common abortion procedure in the U.S.? (More videos available here.)

Defiance training doesn’t connote peaceful opposition or First Amendment rights to protest. It remains to be seen what that defiance will actually look like when these young fellows “hit the streets” in the states Planned Parenthood is targeting with this program: Alaska, Texas, Montana, Michigan, Iowa, Washington, Indiana, Kentucky, and New Jersey. But it would behoove lawmakers and pro-lifers stay aware of the group’s actions and methods.

Ending abortion is hardly going backwards as Planned Parenthood wants to teach their young fellows. In 1973, when Roe v. Wade was decided, there was no widespread access to the technology that lets us see babies in the womb, sucking their thumbs, putting their hands over their faces, and even smiling. The average person did not have access to the amazing scientific reality of life in the womb.

Ending legalized abortion is going forward, acknowledging our scientific advances, and protecting the civil rights of all human beings. Sadly, Planned Parenthood’s Summer of Defiance seeks to send us backwards because it defies science, peace, life, and basic human rights.