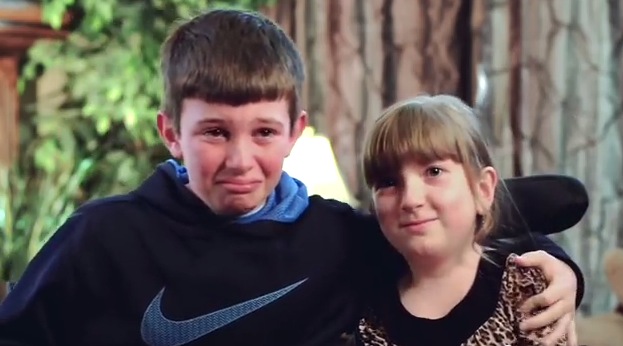 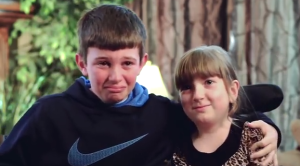 She’s also in a wheelchair, thanks to being born with SMA – Spinal Muscular Atrophy.

In 2013, Lindsay’s family was given the Unsung Hero Award by K-LOVE, a national Christian radio station. An incredibly touching video, highlighting the relationship between Lindsay and her older brother, is going viral online. In the video, Lindsay’s brother says that he would take a bullet for her and that he has no idea what he would do without her. You can almost feel the love he feels for his sister, whom he calls his “best friend.”

This little boy is astounding. I don’t know him but I can say with all honesty that I love him. Don’t ever change sweetheart. Your sister is the luckiest little girl ever.

While this brother is indeed astounding, the terrible thing is that babies like Lindsay can be freely aborted if their condition is recognized before birth. While SMA is a diagnosis – some babies die before the age of two – this does not mean that these babies’ lives are not worth living. A baby who is born with SMA will receive a great amount of love and care, whether his life is short or long. And this love is worth living for.

Don’t take my word for it. The beauty of the life Lindsay lives is evident in the story of her and her brother. And indeed, babies with SMA can live for years and still have a good quality of life. The founders of Fight SMA have a son with SMA who graduated from college five years ago. Fight SMA shares:

In virtually all cases of SMA, the symptoms are dominated by muscle weakness. There are no problems with sensation of the face, arms, or legs. Intelligence is unaffected, and in fact many physicians who have worked with hundreds of children with SMA are impressed that these children tend to be unusually alert, interactive, and socially gifted.

The brain and the sensory nerves (that allow us to feel sensations such as touch, temperature, pain etc.) are not affected. Intelligence is normal.  In fact it is often observed that patients with SMA are unusually bright and sociable. …

In fact it is often observed that patients with SMA are unusually bright and sociable.

But despite the fact that these children deserve the same chance at life as any other child – and sound like absolutely precious individuals – a number of sites online that give parents information about SMA also tell them that abortion is an option. Just one troubling aspect to abortion and SMA is that it seems hard to give a hardcore diagnosis concerning the child’s future. As Fight SMA reports, there is still “a great deal of confusion among patients, parents, and physicians as to the diagnosis.” The disease can also be “severe or relatively benign.”

Current statistics show that the average lifespan of a child with SMA Type I, not put on permanent ventilation or “life support”, is only 8 months of age, with 80% dying by the age of one, and the majority of the rest dying by age 2.  HOWEVER, these statistics are not a hard and fast rule.  Each child is affected so differently by SMA that they do not all follow the same path or progression.  Also, as more is learned about SMA, the lifespan of a Type 1 child can be lengthened depending on the severity of the symptoms for each particular child.  Last but not least, the line between each Type of SMA is not clearly defined, and it is common for a child to exhibit patterns of two types, thus confusing the issue of “life expectancy” for that child.

Here’s the bottom line: whether a child lives for eight months or eighty years, whether she has a disability or none at all – she is equally worthy of being loved and valued, just like Lindsay Cochran. With people like Lindsay in this world, we, just like her big brother, cannot help but be changed forever.