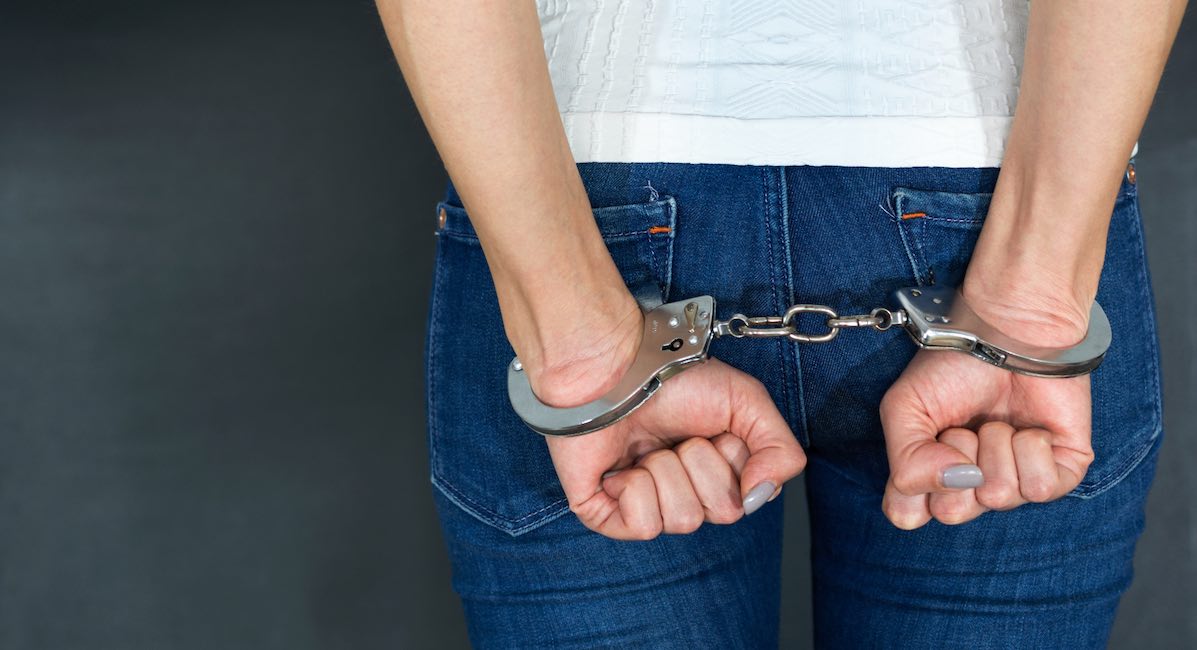 An unearthed documentary film produced in the mid-1990s graphically details the brutality peaceful pro-life activists endured during the “Rescue Movement” of the 1980s and 1990s. The film, “The Brutal Truth,” produced by American Portrait Films, Inc., is difficult to watch and includes graphic scenes of multiple police agencies using pain compliance measures — including martial arts weapons — on peaceful pro-life demonstrators. At times, these tactics caused permanent damage, broken limbs, and even miscarriages. 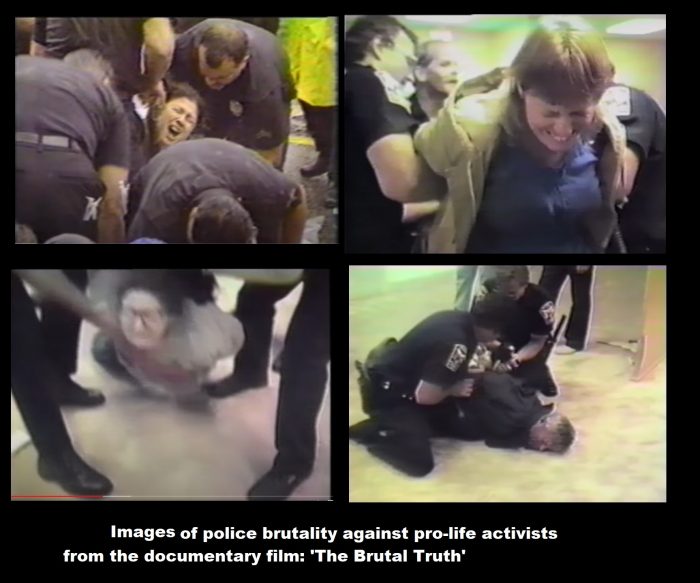 The early pro-life Rescue Movement took place in the tradition of the civil rights movement of the 1960s. Although quite controversial, rescues utilized the tactic of peaceful civil disobedience in the blocking of abortion facilities in order to save babies targeted for abortion. At the time the film was produced, over 40,000 pro-life “rescuers” had been arrested nationwide —  and hundreds of babies had been saved.

In the footage, police are seen with their knees in the backs of pro-life protestors who laid face down in the asphalt. They were restrained by additional officers who appear to be inflicting pain on other parts of their bodies.

Additional footage has been collected by USC’s Digital Library and can be viewed here.

To set the stage, these pro-life rescues took place at a time when abortions had hit an all-time high in the US. Today, due in part to peaceful pro-life activism from the past, abortion facilities are on the decline and abortion numbers have dramatically decreased since that time. The Centers for Disease Control and Prevention’s (CDC) most recent report revealed abortions have dropped nearly 57% to 619,591 in 2018 from a peak of over 1.4 million abortions in 1990. Guttmacher’s latest data on abortion also showed the abortion rate hit its lowest point since Roe v. Wade legalized abortion nationwide.

“Besides being arrested and often jailed, non-violent praying rescurers are being met with police brutality on a scale not seen in this country in over 25 years,” the back cover of the documentary states.

“Sadly, this brutality and injustice has been ignored by the national news media…” it reads. 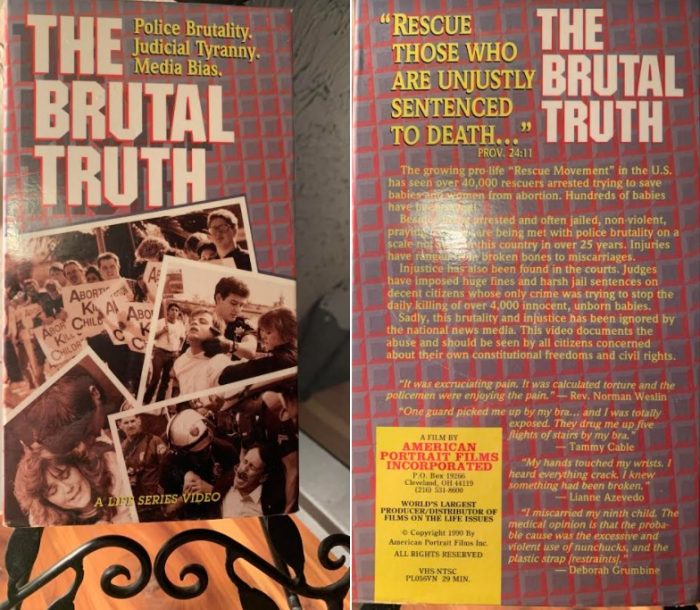 Narrator Marlin Maddoux specified that police brutality did not take place in every city. But where it did occur, the film claimed police often showed up in riot gear, on horseback, using “torture” and “pain compliance” techniques which were “excessive” in nature.

“The brutality began in Atlanta, Georgia, in October 1988 and these tactics were soon exported to other cities such as Los Angeles,” Maddoux states in the film.

The filmmakers state that pro-lifers suffered injuries “from broken bones to miscarriages,” and that “judges have imposed huge fines and harsh jail sentences on decent citizens whose only crime was trying to stop the daily killing of over 4,000 innocent unborn babies.” 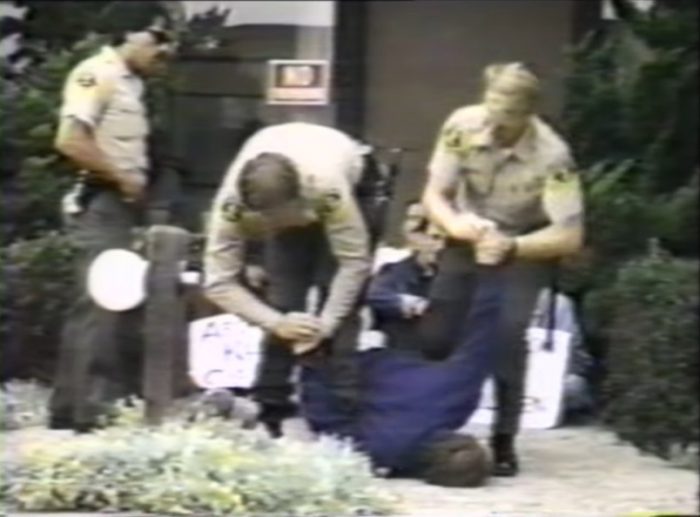 “This wave of activism often comes with a cost,” Maddoux, the founder of USA Radio Network and host of Point of View radio, states in the film. His words are overlayed with images of police bending the limbs of pro-life activists while they cry out in pain.

“Injuries have ranged from having mace sprayed in the face of rescuers — including a two-year-old baby — broken bones, the near death of at least three grown men, and pregnant women losing their babies in miscarriage,” said Maddoux. “However, this brutality has been all but ignored by the national media. That, in itself is a disgrace and an outrage.”

One tactic to force compliance of the protestors, who often went limp to signify the helplessness of the preborn child in the womb, was the use of nunchakus. “Nunchakus consist of two 12-inch lengths of hard plastic connected by four inches of nylon cord that officers clamp tightly around the limbs of demonstrators to force them to move,” the LA Times wrote.

The news report below details the pain impact of the weapon which prompted a $5 million lawsuit against police after officers used the weapon on abortion protestors in San Diego.

A 1989 report published by the Chicago Tribune described additional claims: “Operation Rescue members who blocked abortion clinics in Los Angeles on March 25 and on June 10 say police twisted arms and ears or used nunchukus [sic] so harshly that they suffered muscle strains, nerve damage, bruises and, in [Kenneth] Fisher’s case, hairline fractures of the wrist and elbow.”

‘They pinned my hands behind my back until I felt two distinct snaps,” Fisher told the paper. ‘They were in a frenzy.”

In 1990, Los Angeles police reportedly used the weapon on pro-life activists, breaking the arm of one demonstrator in the process. Another pro-life activist told the LA Times how police “grabbed and twisted his wrists until finally breaking his right arm, even though he told the officers he would cooperate.” 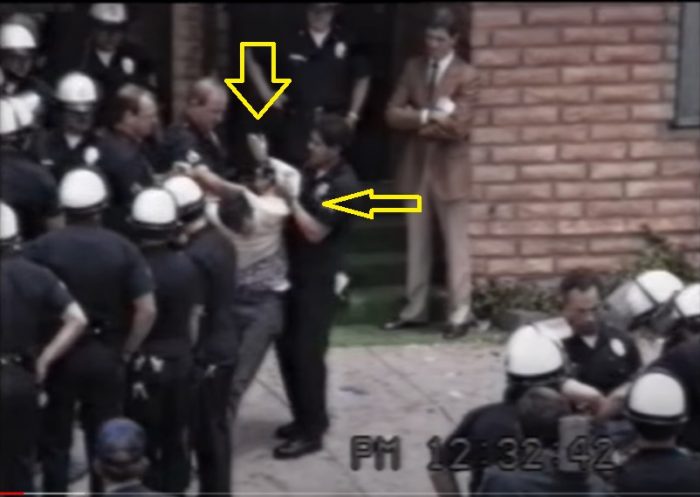 “Never before — or since — has the LAPD used such a violent manner to remove nonviolent, peaceful demonstrators,” Susan Carpenter McMillan, a spokeswoman for the Right-to-Life League of Southern California, told the LA Times in 1990. In 1991, police settled a lawsuit filed by pro-lifers by agreeing to stop using the weapon against them.

Allegations of sexual abuse were also documented in the film. Perhaps the most horrific example of abuse was alleged to have taken place in Pittsburgh, Pennsylvania, in March 1989 when pro-life women were taken to the Allegheny County Jail and allegedly dragged (with hands cuffed behind their backs), by their bras, with breasts exposed.

According to Rosanna Weissert, the women were verbally abused, “variously threatened with rape by the guards, with sodomy, with being thrown naked into the prison cells.” The county denied the accusations.

One 24-year-old female pro-life activist arrested at the Pittsburgh event told the Chicago Tribune, that “Allegheny County jail guards fondled her breasts, punched her in the chest, kicked her in the groin, withheld oxygen when she had an asthma attack and removed their name tags so they could not be identified.”

“They told one of my sisters they would sodomize her,” she told the newspaper. “To another girl, they said, `See this key? It’s a key to a cell full of rapists. We’re going to put you in and watch you get raped.”

According to a blog post by Catholic Culture, a civil rights lawsuit was filed against the county in 1991 in which “the women contended that they had been “victims of officially sanctioned, intentional and malicious physical brutality,” of “sexual harassments and excessive force by male correction officers in the men’s Allegheny County Jail to coerce their cooperation.”

“These women were offered a $4,000 payment — which, in effect, appeared to constitute an admission that the women had been wronged,” the report claimed. The event has been dubbed by activists as the “Pittsburgh Nightmare.”

In total, over 70,000 arrests took place during these pro-life rescue events of the 1980s and 90s, according to the Rev. Patrick Mahoney, a leader of the “Operation Rescue” movement at that time. Rev. Mahoney told Live Action News that “rescuers had to sign pledges of non-violence.”

Despite these draconian measures, fines, lawsuits, arrests, and police brutality directed at them, Rev. Mahoney pointed out that (emphasis added), “there was not one conviction of a violent act at a peaceful Operation Rescue event.”