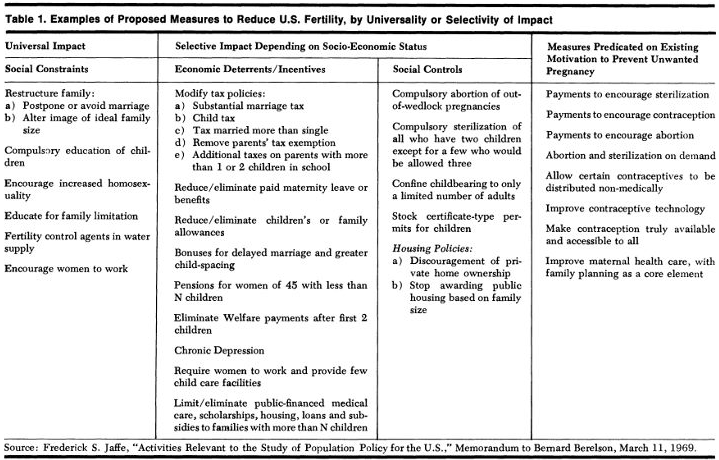 No wonder Planned Parenthood employees aren’t allowed to talk about it.

A blog from last November brought to light a memo, compiled by former Planned Parenthood vice president Fredrick Jaffe, that depicts rather Orwellian notions of population control from 1969.  There has been skepticism regarding its legitimacy, but the memo in its entirety in context is available right here. (For those of you without a JSTOR account, a copy of the page containing the original memo can be found here.)

The Jaffe Memo is a list of “examples of proposed measures to reduce U.S. fertility” produced by Frederick Jaffe. Jaffe was associated with Planned Parenthood Federation of America from 1954 to 1974, eventually becoming the vice president of the organization.

Here are a few of the proposals that the memo evaluted.

Regardless of how you feel about cohabitation, single parenting, or premarital/nonmarital sex, there is no denying that these two aspects of the memo have absolutely been instilled into our society over the last few decades. There are now over ten times as many couples cohabitating today as there were back in 1960. In 1960 (just before contraception became legal and widespread), married couples accounted for almost three-fourths of homes, whereas today they account for fewer than half. Also in 1960, 5.3% of babies were born to unmarried mothers, but today, the percentage is up to 40.8%. In 1970, the number of married couples with their own children made up 40.3% of households, while that percentage fell to 24.1% by 2000.

At the time this memo was created, there was talk of poisoning water supplies with birth control chemicals without the consent or knowledge of consumers – to the point that upon resistance, “involuntary control must be imposed.” There was talk of it from 1968 onward.  (Here are two, three, four more newspaper articles).

This wasn’t the first time Planned Parenthood was tied to this method of population control: the American Eugenics Society, of which Planned Parenthood founder Margaret Sanger was a member until 1956, rallied behind the suggestion of poisoning minority groups without their consent.

Abortion and sterilization on demand

Since abortion was legalized in 1973, over 55,000,000 unborn children have lost their lives in the name of “choice.” Today, about 1,200,000 abortions are performed every year, 15,600 (1.3%) of which are performed after twenty-one weeks’ gestation. Roe vs. Wade declared elective abortion a right until the unborn child was viable. Its counterpart case, Doe vs. Bolton, which was decided the same day as Roe, declared that an abortion could be obtained after viability to protect a woman’s health.

Doe states that “medical judgment may be exercised in the light of all factors – physical, emotional, psychological, familial, and the woman’s age – relevant to the well-being of the patient. All these factors may relate to health.” In other words, a woman may obtain an abortion for virtually any reason whatsoever, during any stage of pregnancy.

Make contraception truly available and accessible to all

By “truly available and accessible to all,” this means distributing birth control to minors as young as thirteen without parental consent. Planned Parenthood teen clinics are popping up throughout the country – Arizona, Iowa, and Texas, just to name a few. No parental involvement necessary. They’re going into schools as well, promising children free condoms and birth control.

Further, “truly available and accessible to all” includes getting birth control and condoms into the hands of underage sexual abuse victims so their statutory rapists can continue to secretly abuse them. It means supplying pimps with birth control to give to their underage sex slaves so they can continue selling young girls’ bodies for profit. That is Planned Parenthood’s idea of “truly available and accessible” contraception.